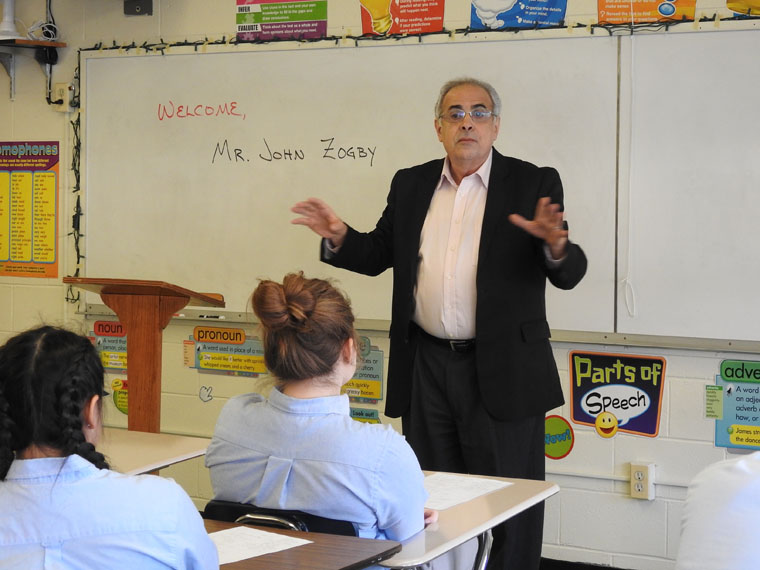 UTICA — Polling is a way to find out what people value, said international pollster and author John Zogby, speaking with more than 20 students in Notre Dame Jr./Sr. High School’s college-level statistics class last week. Zogby introduced the high school juniors and seniors to the three facets of his work: polling, analyzing data and commentating on findings.

Zogby is a Notre Dame High School and Le Moyne College graduate and was a teacher at the former St. Francis deSales High School in Utica early in his career. While teaching a course at Mohawk Valley Community College and running for Utica’s city mayor in the ‘70s, he said his college students worked on polling projects. “I knew by precisely how much I would lose the election,” he joked.

As a pollster, he has measured public opinion in more than 80 countries. However, polling has evolved with technology and the task is getting more difficult. More cell phones in use than land lines and robotic calling have all changed the landscape of the work.

He said he is partial to aggregating polls like those in The Huffington Post and finds robo-calling polls to be inaccurate. When discussing election polls, in particular, he said, “You have to remember the principle is that no one has voted yet.… Some people make up their mind once they’re behind the curtain in the voting booth.”

Zogby said the area of data analytics will have some of the fastest-growing job opportunities in the next 10 years. Thanks to growing technology, it is clear that data can be collected efficiently, he said, “But who is going to use it?

On a basic level, it would appear that the polls capture what people think, he said. “But what people are thinking could be fleeting,” Zogby noted. “We’re only getting a snapshot of what is going on at this particular moment in time.”

“We try to plumb the depths of public opinion to get to what people value.… We continually ask, ‘What side of an issue best represents who you are?’ It’s the values that capture what motivates people,” he said. Zogby said this holds true whether the question is who people are voting for or what they feel about global warming.

Through a system of personal, random sampling over a period of time, he said, it is easy to see if something is changing in public opinion. Trends are revealed and the data will point in one direction or another. “Everyone wants to know what it all means, not only for themselves but for the future,” he said. Data analytics is used to help people and leaders make decisions, he noted.

Zogby studied history in college and said it has helped him take the data and analysis and discover the message. He said he uses historical context to analyze the data and present it. “This [statistics] is a very important class, but so is literature and science. Ultimately, you’ve got to be able to tell the story.”

He cautioned students from “pigeon-holing” themselves in a specific line of study or career path. “The word to remember is: nimble,” he said. “Your various skill sets can set you apart. Tell the story of how you resolved a conflict, helped somebody or handled something differently. That is what employers look for.”