150 years of dignity and care: A look back at the founding of St. Joseph’s Hospital 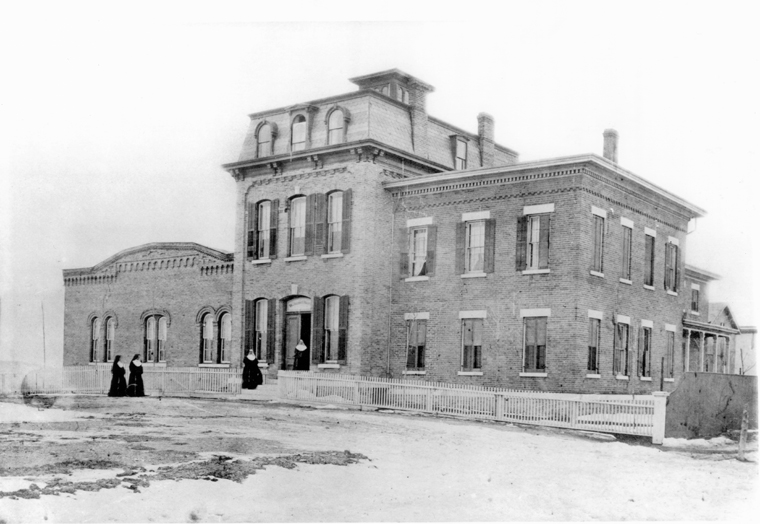 The exterior of the newly purchased of Samsel property on Prospect Hill. The Franciscan sisters opened the hospital there on May 6, 1869, less than a month after buying it for $12,000. Adjusted for inflation, the property would cost $225,484 today. (Courtesy St. Joseph’s Health) 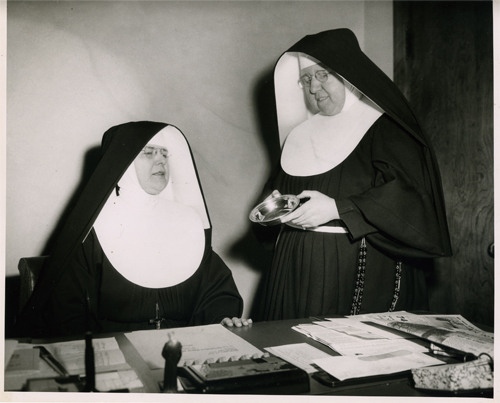 In spring 1860, eight Franciscan sisters came to Central New York to teach at Syracuse and Utica Catholic schools. The city of Syracuse was just 13 years old, with a population of about 28,100. Streetcars pulled by horses carried passengers from Clinton Square to the city’s First Ward, and gas lights brightened windows and street corners at night. Many German and Irish immigrants worked on the Erie and Oswego canals, the growing railroad, or for salt producers.

By 1869, Syracusans likely still bore the burdens of the Civil War and the grief that followed President Abraham Lincoln’s assassination. Local newspapers reported outbreaks of infectious diseases including yellow fever, diphtheria, and consumption (tuberculosis). One report of a scarlet fever included a dubious treatment: rubbing bacon fat on the patient twice a day. The Franciscans were alarmed that Syracuse’s unsanitary water supply was causing typhoid.

The sisters, then numbering about 29, took action, fulfilling their mission as followers of St. Francis and making good their intention to start a hospital in Syracuse. Five lines of tiny print in the April 12, 1869, Syracuse Journal announced: 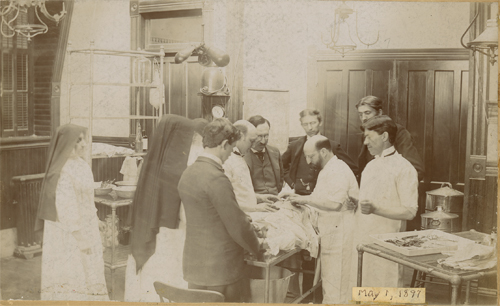 The German Sisters of Charity have purchased the Samsel property on Prospect Hill, for which they pay $12,000. The building is large, and is purchased for the purpose of a hospital in charge of the Good Sisters.

The sisters went to work scrubbing and rearranging the former dance hall and saloon in the rough city neighborhood. They “transformed a source of crime and sorrow into a temple of healing,” according to a newspaper account cited in “Pilgrimage and Exile,” the 1980 biography of Mother Marianne Cope co-authored by Sister Mary Laurence Hanley (1925-2011).

The Franciscans opened the doors to Syracuse’s first public hospital on May 6, 1869, and admitted the first patient May 13. By the end of the year, the hospital had treated 123 patients.

The 15-bed facility has grown to a 451-bed hospital; it’s now part of a regionwide healthcare system called St. Joseph’s Health, run by the Trinity Health system since 2015. The system employs about 5,000 people at primary, specialized, and urgent care facilities and has affiliations with Auburn Community Hospital, Rome Memorial Hospital, and the University of Rochester Medical Center. About 850 people will celebrate the hospital’s history and Franciscan legacy at the Sesquicentennial Gala Friday, May 31, at the Syracuse Oncenter. 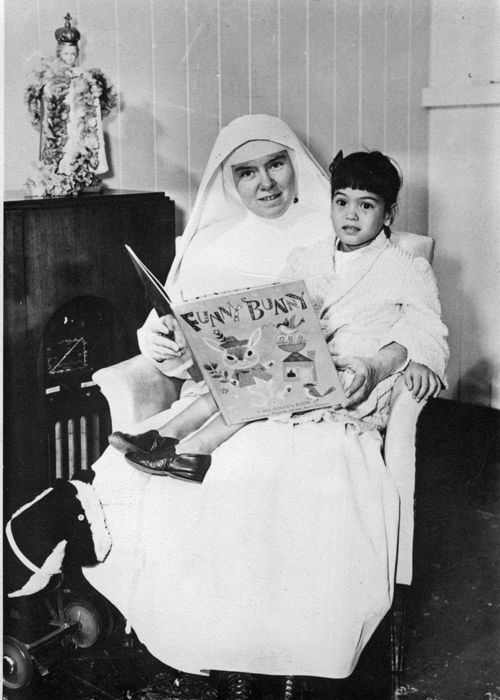 Before the hospital opened, “People had nowhere to go to die,” then vice president Sister Rose Ann Renna (1937-2018) told the Catholic Sun in 1994, explaining that sisters cared for the sick in their homes. “That was one of the reasons why we named it after Joseph, patron of a happy death.”

The founding staff included five sisters, none of whom received formal nursing training, according to Charlene Martin, congregational archivist. No doubt they learned from physicians, including Dr. William Pease, a Civil War doctor who served as the hospital’s chief of surgery from 1860 to his 1886 death. An 1897 photo shows three sisters observing surgery.

Mother Marianne Cope served as St. Joe’s administrator from 1870 to 1877. According to a biographical account by St. Joseph’s, she “administered the hospital from top to bottom… reverence for the patients was her main concern and she could often be found sitting by a patient’s bedside after the lights went out. She even sent personal letters of condolences to relatives of patients who died at St. Joseph’s.”

Everyone should receive respectful care — including immigrants and people with alcoholism, mental illness, or leprosy, the sisters insisted. “The charity of the good knows no creed and is confined to no one place,” Mother Marianne wrote in 1870, 13 years before she went to Hawaii to minister to patients with leprosy.

Researchers in the 1870s were only beginning to understand germ theory — the concept that certain diseases are caused by microorganisms, so small they’re visible only with a microscope. Penicillin would not be discovered until 1928, and vaccines were decades away.

Mother Marianne “achieved a synthesis of attitudes that was unique in a nursing sister of her time: she could be both charitable in the religious context and scientific in the medical approach,” Hanley and O.A. Bushnell wrote in “Pilgrimage and Exile”: “In the interests of St. Joseph’s patients, she took every available opportunity to improve the hospital’s services. … Apparently, she introduced the new concepts of sanitation, only then being practiced in Europe by Lord Lister and the few enlightened physicians who were aware of his work.” 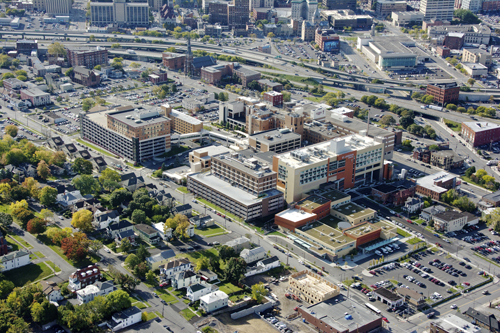 Mother Marianne implemented strict, exacting policies she took to Kalaupapa, where no sister has ever contracted leprosy. An 1874 newspaper article noted “the hospital wards with their clean, well-aired beds, and the excellent ventilation; the lime-whitened walls and ceiling, and the healthful location of the institution presenting.” He added, “The same cleanliness, good order, care and attention pervades every department throughout the hospital.’”

Accounts of St. Joseph’s early days do not mention anti-immigrant and anti-Catholic sentiments of the era. But the Franciscans hinted at discrimination in their 1870 hospital charter: “in the admittance and treatment of patients, no distinction shall ever be made because of theological belief, nationality or color.”

One newspaper article noted that the hospital’s first four patients included two Catholics and two non-Catholics. In 1881, the Syracuse Daily Courier published a note “thanking the Sisters of St. Joseph’s Hospital for their good care and generous treatment of a family of Russian refugees, which had recently arrived in Syracuse.” It was signed “A Hebrew citizen.”

A century and a half later, Michelle Brown thinks often of Mother Marianne, Sister Dominica, and the other founding sisters. “It was largely a German and Italian neighborhood, people in this country for the first time,” said Brown, director of community health and well-being for St. Joseph’s Health. “That’s not really different from the population we see here now. They’re coming from different lands but need some of the same ministries.”

Brown came to Syracuse in 2003 as a FrancisCorps volunteer working at the Assumption food pantry and health clinic. She learned about the hospital’s mission from Sister Renna and others. “They understood and appreciated the history of immigration to the North Side neighborhood over time and could see how that translated into today and what they would call Assisi in Syracuse,” she said.

“Sometimes people just want to be seen and heard and know they matter,” she said. “At St. Joe’s there’s no closer ministry to people who are vulnerable than nursing. We’ve maintained that connection. It’s great to continue it.”

1855: The Sisters of St. Francis are founded in Philadelphia.

1860: The Sisters of St. Francis come to Syracuse to teach at Assumption School in Syracuse and St. Joseph’s School in Utica.

1878: St. Joseph’s Hospital Aid Society is formed, later becoming the board of directors.

1970: The hospital opens the first NICU in the region.

1971: James Abbot is appointed as the first lay administrator. Fifteen Franciscan sisters still work in the hospital at this time, including Sister Patricia Ann Mulherin, who served as vice president until her 1987 death.

2012: Mother Marianne Cope, one of the founding sisters and former St. Joseph’s administrator, is canonized a saint.

2017: Leslie Paul Luke is named the 14th president and CEO. He is the hospital’s first president from outside the Syracuse area. He belongs to the Church of Jesus Christ of Latter-day Saints (the Mormons), making him the first non-Catholic in the position.