We have a saint: St. Marianne Cope canonized 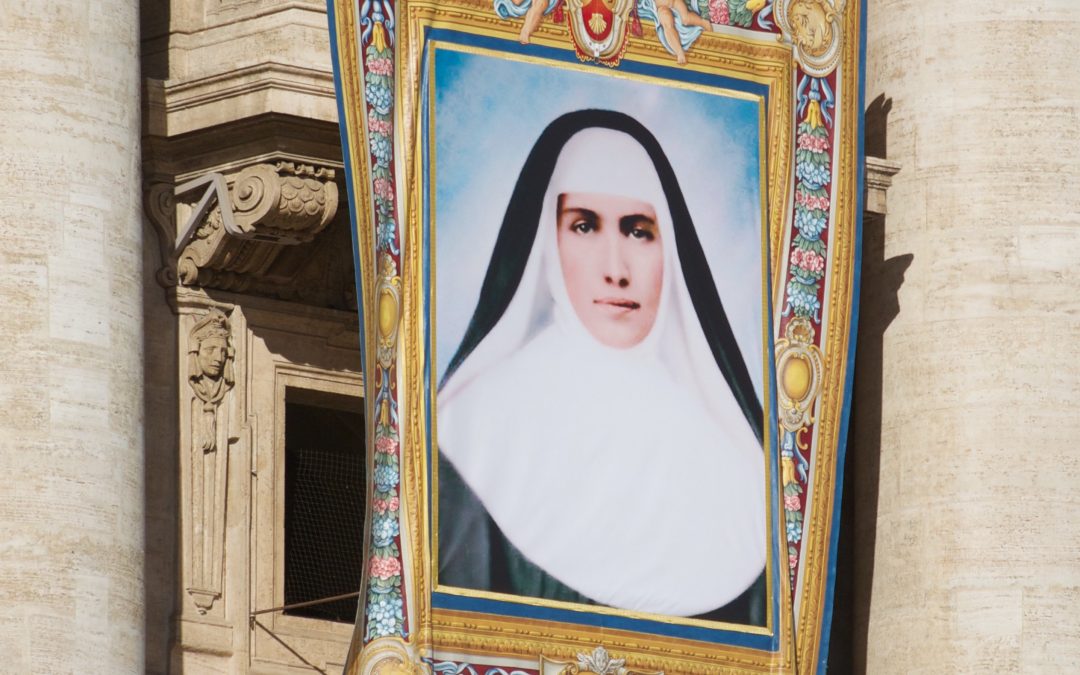 Some 40 years after work to promote Mother Marianne Cope’s cause began, Pope Benedict XVI officially declared her a saint Oct. 21 during a Rite of Canonization celebrated in St. Peter’s Square. A Franciscan sister who ministered in Syracuse and Hawaii between 1862 and 1918, St. Marianne is the first American Franciscan to be named a saint. Six other blesseds were also declared saints at the ceremony, including 17th-century Mohawk Valley native Kateri Tekakwitha, who became the first Native American saint from North America. The three-hour event, which included the Rite, Mass and recitation of the Angelus, attracted an estimated 80,000 people. 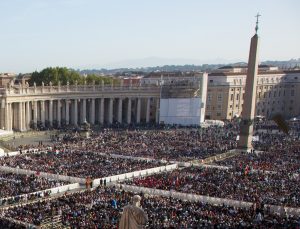 Bishop of Syracuse Robert Cunningham arrived at the square just after 6 a.m., along with around 200 individuals participating in the pilgrimage he led to Rome. In the pre-dawn dark, songs, prayers and chants rose from the already-huge crowd as excited pilgrims from around the world waited on line to be let in for the ceremony.

“It is nice to see so much happiness, and to see people of different nations and backgrounds here to celebrate people who took the call to holiness seriously,” Bishop Cunningham said. “This is a great day for the Franciscan sisters and the Dioceses of Syracuse and Honolulu.”

Bishop of Honolulu Clarence Silva agreed. “I’m very excited, very moved. This is the universal church coming together — people from all parts of the world,” he said. “[St. Marianne will be] an inspiration for people everywhere.”

Many people were still jockeying for entrance and seats when Pope Benedict began the Rite, celebrated in Latin, at 9:30 a.m. Three petitions were read by Cardinal Angelo Amato, SBD, Prefect of the Congregation for the Causes of Saints, accompanied by cause postulators. The petitions asked the Holy Father to enroll the blesseds among the saints of the Church. Cheers broke out in the crowd as the soon-to-be saints’ names were read. Following prayer and song, Pope Benedict declared the seven blesseds saints with the Formula of Canonization, decreeing that they are to be venerated as saints by the whole Church. 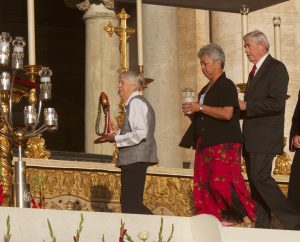 A relic of St. Marianne is presented to Pope Benedict XVI. Sharon Smith, whose miraculous medical recovery paved the way for St. Marianne’s canonization, carries a specially crafted wooden tau containing the relic. Smith is accompanied by Sister Michaeleen Cabral, OSF, who first recognized that Smith’s miraculous cure was due to intercessory prayers to Mother Marianne, and Dr. Richard Hehir, who reviewed the medical evidence for the miracle cases. (Sun photo | Chuck Wainwright)

Relics of each saint were then presented to the Holy Father. Sharon Smith, whose miraculous medical recovery paved the way for St. Marianne’s canonization, carried a specially crafted wooden tau containing the relic. Accompanied by Sister Michaeleen Cabral, OSF, who first recognized that Smith’s miraculous cure was due to intercessory prayers to Mother Marianne, and Dr. Richard Hehir, who reviewed the medical evidence for the miracle cases, Smith raised the tau in front of Pope Benedict then placed the relic on a podium at the side of the papal altar.

With Pope Benedict as the principal celebrant, Mass was concelebrated by a number of bishops and priests, including Bishops Cunningham and Silva; Friar Justin Biase, OFM Conv., Minister Provincial of the Conventual Franciscan Friars of the Immaculate Conception Province; and Syracuse priests Fathers Charles Vavonese and Joe O’Connor.

In his homily, Pope Benedict reflected on the message of the readings, as well as the happy coincidence that the Mass was being celebrated on World Mission Sunday.

“The Church listens to them [the readings] with special attention and renews her conviction that she should always be fully dedicated to serve mankind and the Gospel,” he said.

The Holy Father also spoke of the “tenacious profession of faith” offered by each of the seven new saints. Of St. Marianne, he said her life’s work “showed the highest love, courage and enthusiasm. She is a shining and energetic example of the best of the tradition of Catholic nursing sisters and of the spirit of her beloved St. Francis.” 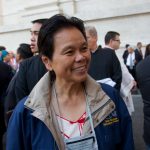 Sister Davilyn Ah Chick, OSF, of Hawaii, offered in English the first petition during the Prayer of the Faithful at the Mass to canonize St. Marianne Cope Oct. 21, 2012. (Sun photo | Chuck Wainwright)

Sister Davilyn Ah Chick, OSF, of Hawaii, offered in English the first petition during the Prayer of the Faithful. “O God, source of all holiness, through the intercession of the Blessed Virgin Mary, Queen of all saints, renew the beauty of the Church, the Bride of Christ,” she read. Prior to the ceremony, Sister Davilyn said being selected to offer the petition was “a great privilege.”

Dr. Paul DeMare, a great-great grandnephew of St. Marianne, was part of the offertory procession.

Individuals close to the causes of each saint were chosen for the honor of receiving Communion from Pope Benedict. Sister Patricia Burkard, OSF, former general minister of the Sisters of St. Francis of the Neumann Communities; Sister Grace Anne Dillenschneider, OSF, vice postulator for the cause for the Diocese of Syracuse; Sister Alicia Damien Lau, OSF, of Hawaii; and Pauline Chow, current resident and patient at Kalaupapa, each knelt before the Holy Father in front of the papal altar to receive. Meanwhile, priests including Syracuse priests Fathers Joseph Scardella, James Lang, John Manno, Cliff Auth, John Donovan, John Mikalajunas, Mark Pasik and Brad Milunski, OFM Conv., distributed Communion to portions of the crowd.

The ceremony closed with a recitation of the Angelus, after which Pope Benedict exited St. Peter’s Square via the popemobile.

“It was very moving to hear the Holy Father say ‘Syracuse, New York’ and ‘St. Marianne Cope.’ I couldn’t help but get teary-eyed,” said Father Scardella after the ceremony. “To be so close to the Pope, and to exit St. Peter’s and see such a vast crowd — what a tremendous feeling.”

At a Mass of Thanksgiving celebrating St. Marianne’s canonization the following morning, Sister Patricia reflected on the meaning of the canonization for the Franciscan community.

“I can’t find the words to express our joy,” she said. “One of our own has been made a saint.” She added that the seven newly canonized saints stand as examples of faith that will serve to inspire “good works and good people.” 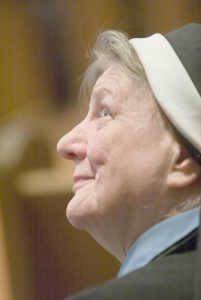 Those attending the Mass of Thanksgiving were asked to remember in a special way the late Msgr. Michael Minehan, who was instrumental in advancing the cause, and the late Sister Mary Laurence Hanley, OSF, who directed St. Marianne’s cause for decades.

“What was important to [Sister Mary Laurence] was that Mother Marianne be recognized as a saint. When she died, she was very peaceful and knew her work was done,” she said. “She is celebrating [in heaven] with Mother Marianne, Mother Viola, and all the sisters who have gone before us.”

Bishop Cunningham will celebrate a special Mass honoring St. Marianne and her canonization Oct. 28 at the Cathedral of the Immaculate Conception in Syracuse at 2 p.m. All are invited to attend.

Editor’s note: The Nov. 1 issue of the Sun will be a special edition featuring additional coverage of and photos from the canonization ceremony and the pilgrimage to Rome.