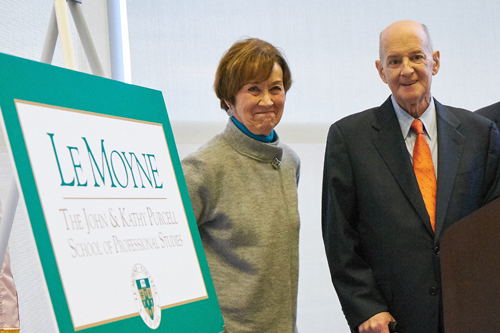 Kathy Grace and John Purcell met in February 1964 outside the Le Moyne College library in Grewen Hall. Kathy, then a sophomore from Long Island, was studying sociology. John, a junior from Syracuse, was a commuter student (a “day hop”) studying industrial relations. The two started dating and married less than two years later.

They credit their alma mater as the source of their greatest gifts: a Jesuit education that put them on the road to successful careers; loyal friends; and a lifelong love affair launched on the Heights. The Rochester couple has returned the favor with a $6.5 million gift, which the Syracuse college will use to expand programs in its renamed John & Kathy Purcell School of Professional Studies.

Kathy Purcell, Class of 1966, and John Purcell, Class of 1965, were eyeing Duquesne University and Cornell University before choosing Le Moyne. “We’ve never regretted the decision,” Kathy Purcell said Dec. 8 at a reception celebrating the third-largest gift ever made to the college. “It’s something that changed the course of our lives and, hopefully, those of our children and grandchildren.”

The Purcells are among approximately 1,500 married couples who met while students at Le Moyne. The college has about 25,000 alumni.

About 250 people — including students from the education, nursing, occupational therapy, physician assistant and family nurse practitioner programs — cheered as the Purcells were introduced at the reception. The Purcell gift will benefit those programs through scholarships and facility and technological upgrades. The school may also use the money to develop future programs within the school, as well as to fund faculty or student research or travel, or a guest-speaker series, officials said.

The gift allows Le Moyne to expand education to students in the growing health fields, said Dennis DePerro, dean of the Purcell School. The school’s physician assistant program is the only college program that draws more than half its students from outside New York. It draws 1,500 applicants for 75 spots a year, DePerro said.

The Purcell gift is the third-largest gift in the college’s history. The largest gift was the $50 million donation from the estate of Robert and Catherine McDevitt of Binghamton in 2008. The college received $7 million from 1971 graduate Michael Madden in 2012. That donation created The Madden School of Business.

In addition to the $6.5 million gift, the Purcells donated shares of Fibertech in 2012 and 2015, which resulted in investment gains of an additional $1 million for the college. In 2013 the Purcells donated $1 million to help fund the Purcell Scholarships at the Madden School of Business. In 2014, they donated money for landscaping and a vintage clock in front of Nelligan Hall, the college’s first student residence hall.

Le Moyne honored John Purcell in 2013 with the Frank Fernandez Business Leader of the Year Award. Capacity magazine named him Telecommunications CEO of the Year in 2014.

Kathy Purcell, who has a master of public administration in health care management, works as a clinic administrator at the Kirch Developmental Services Center, part of the University of Rochester Medical System. She was a member of the board of regents at Le Moyne from 2002 to 2009 and currently serves on the advisory council for the Purcell School of Professional Studies. In June 2011, she received Le Moyne’s Ignatian Award for Professional Achievement.

Campus has changed dramatically since their college days. “There wasn’t much here,” Kathy Purcell said. “It was very wide open. The trees were just sticks. It was very windy.”

Her class was the first to live in St. Mary’s Hall — Le Moyne’s first residence hall for women. “We had to live at Hotel Syracuse first semester because the dorm wasn’t ready,” she said. “It was a different time. Women were not allowed to wear pants on campus.”

Kathy Purcell cites Father Daniel Berrigan as a major influence. Berrigan, the Jesuit priest known for his anti-war activism, taught theology at Le Moyne from 1957 to 1962. He helped found International House, a spiritual community dedicated to service and social justice.

“His ideals had a big effect on me,” she said. “There was a lot of injustice in terms of what people had and how they were discriminated against. Thanks to him, I became much more aware of that.”

A concern for equality plays a role in her career in the health field. “The availability of health care is not equal among all people,” she said. “The focus of our clinic and health system is being part of the solution to make sure quality health care is available to all.”

The Purcells have four children and six grandchildren, all of whom live in the Rochester area. Their oldest son, T.J., graduated from Le Moyne in 1988.

“Le Moyne’s identity is linked to the people our alumni become,” said LeMura, who as Le Moyne provost recommended the school create a professional school. The college emphasizes cura personalis and magis — Latin phrases that mean “care for the whole person” and “doing more for others” — and “John and Kathy surely represent Le Moyne at our best,” she said.

Kathy Purcell described the gift as “some small way to enhance and expand the same opportunity” she and her husband had to other Le Moyne students. “All we ask in return is that you take some time not only to count your blessings but to make your blessings count,” she said.