Won’t you be my neighbor? Mister Rogers’ music takes the stage for a third time 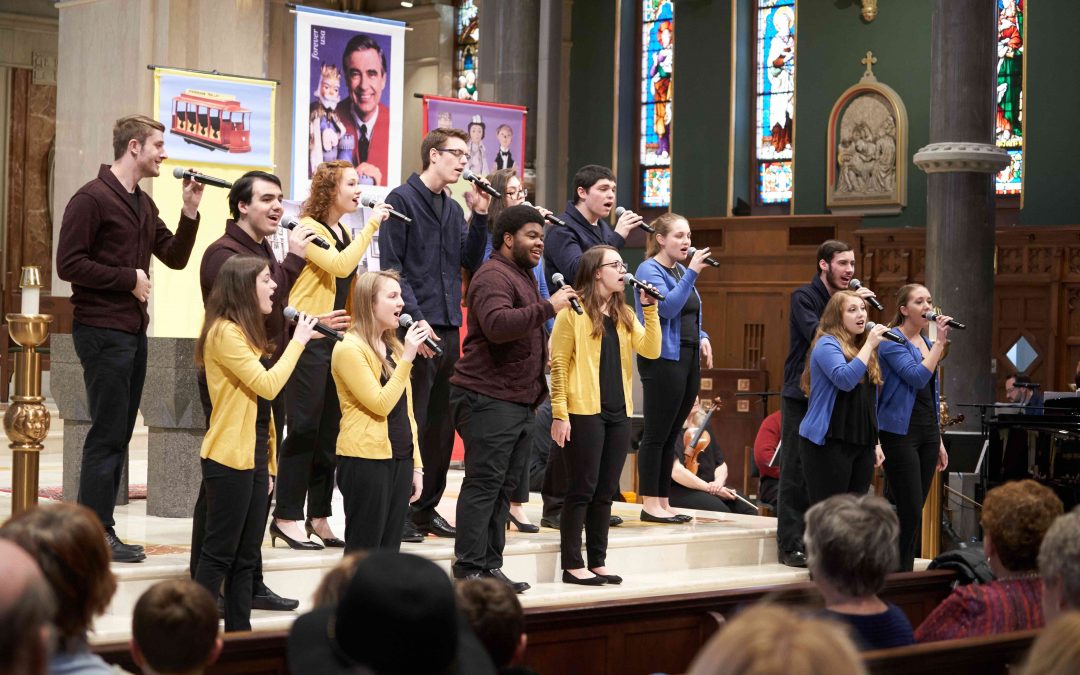 The music of Mister Rogers’ Neighborhood is performed at the Cathedral of the Immaculate Conception March 31, 2019. (Photo provided)

There are many lessons to be learned through the music of “Mister Rogers’ Neighborhood,” from confidence to compassion to kindness. Tom Andino, Le Moyne College’s Director of Campus Ministry, Liturgy, and Music, suggests another takeaway that links the message of the man in the iconic sweater and the college’s Jesuit foundations: “Be open and pay attention if you have a crazy idea — that’s Ignatian discernment.”

Andino’s “crazy idea” first came to him in February 2018 — what if he could put on a concert at Le Moyne featuring jazzy tunes from the prodigious Fred Rogers songbook?

Fred Rogers, the kindly, cardigan-wearing, shoe-tossing creator and host of the children’s program “Mister Rogers’ Neighborhood,” was a fixture on television for more than 30 years. Through gentle messages, fantastic trips to the Neighborhood of Make-Believe, and catchy songs, millions of children learned important lessons about self-worth, love, and friendship. Rogers died in 2003.

Andino has been a huge Rogers fan since he first watched the show as a kid himself. In 1996, he got to meet Rogers at Pittsburgh’s WQED studios, where the show was produced. Andino even got to sit on the couch and feed the fish on the familiar, homey set.

So when the 50th anniversary of the show’s beginning rolled around and the idea of the musical production came to him, Andino couldn’t shake it.

Andino reached out to Carol Jacobe, director of Le Moyne’s vocal jazz ensemble the Jazzuits, who was immediately on board. He also recruited pianist, composer, and arranger — and former college roommate — Scott Arcangel to help with the arrangements. They sorted through more than 200 songs, choosing about 20 selections and knitting them together with a narrative drawn from Rogers’ own words and writings.

The first performance of the show, at Le Moyne in October 2018, sold out and was met with rave reviews; the ensemble was then invited to reprise the performance at the Cathedral of the Immaculate Conception in March. It will be back by popular demand for a third time on Oct. 27 at Our Lady of Pompei-St. Peter Church in Syracuse.

The Jazzuits, guest artist Ronnie Leigh, and Arcangel will return for the performance, along with various local instrumentalists. New to this performance will be Solvay High School’s Vocal Jazz Ensemble, directed by CJ Oliver, and a cameo by Dr. David Rudari, Professor of Music at Onondaga Community College.

Three Jazzuits — senior Aubrey Otchere, senior Mia Franko, and junior Leo Scarselletta — beamed when they spoke to the Sun about the program’s music, its messages, and its effect on the crowd.

Otchere sings “You’ve Got To Do It.” “The message of my song is no matter how hard stuff gets or how daunting something seems, you can do it if you try — you’ve just got to do it,” he said. The show, he added, is “so much fun,” with audience members of all ages getting into it.

Franko sings “Everybody’s Fancy,” a tune about “how everyone’s unique…. Everybody’s different and that’s okay.” She noted that the songs, which feature tight chords and jazzy rhythms, are surprisingly complex given they were originally composed for a children’s show.

Scarselletta sings “Children Can,” an “empowering” song about all the things kids can do that adults no longer can. He also has a soft spot for the group number “It’s You I Like,” which celebrates everyone’s uniqueness. “The message — it gets me every time,” he said.

And that is the message Andino hopes the performance will drive home for the audience.

“As I look at the culture that we’re in, this world that we’re in, people need to hear that message, outside of the context of a children’s television show,” he said.

“Loving yourself and being okay with who you are empowers other people to be who they are. And that’s all his show was about.”

The Le Moyne College Jazzuits, under the direction of Carol Jacobe, and the Office of Campus Ministry, under the direction of Tom Andino, will present a third performance of their recent musical collaboration celebrating the 50th anniversary of “Mister Rogers’ Neighborhood” on Sun., Oct. 27, at 4 p.m. (doors open at 3:30 p.m.) at Our Lady of Pompei-St. Peter Church, 301 Ash St., Syracuse. The concert is free and open to the public. A freewill offering will be taken to benefit Cathedral Academy at Pompei and the Fred Rogers Center.