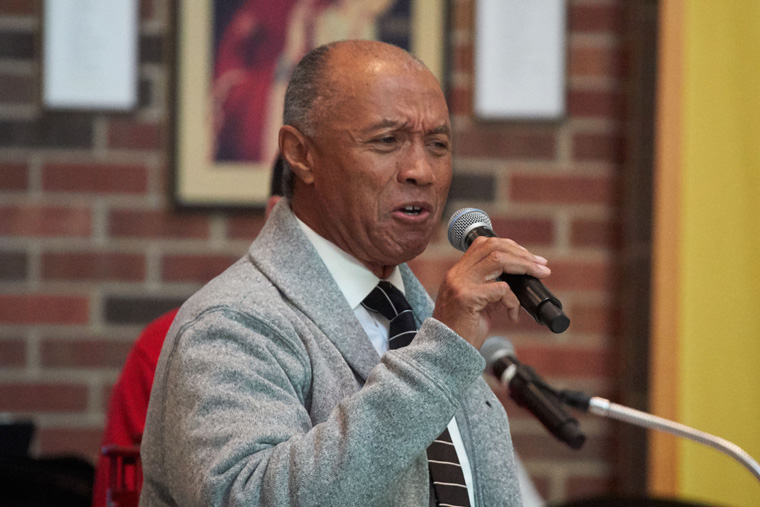 The music of Mr. Rogers’ Neighborhood will fill the lofty reaches of the Cathedral of the Immaculate Conception at 2 p.m. on Sunday, March 31. 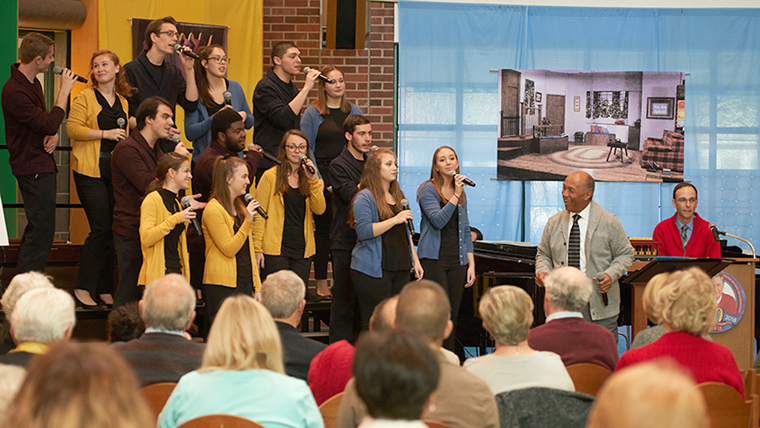 A wide shot of the October concert with the Jazzuits singing with Ronnie Leigh, as Tom Andino plays the piano.

The Le Moyne College Jazzuits, five-time SAMMY (Syracuse Area Music Award) winner, singer Ronnie Leigh, and guest Scott Archangel will perform favorites from the show that celebrated its 50th anniversary this year.  The concert is a repeat of a sold-out campus event in October and is free and open to the public.

The Jazzuits will also be performing parts of the 5:10 p.m. Mass that afternoon.

The show is a collaboration between Tom Andino, director of campus ministry, Carol Jacobe, director of the Jazzuits, and Archangel, Andino’s SUNY Potsdam roommate and friend for 25 years.

For more than three decades, Fred Rogers was a warm and familiar presence in American households, sharing lessons about friendship, gratitude, and perseverance with millions of children. His signature red cardigan and blue sneakers were instantly recognizable to anyone tuning into his long-running show, Mr. Rogers’ Neighborhood.  There were more than 200 original songs performed over the years, including “Won’t You Be My Neighbor,” “It’s You I Like” and “Sometimes Isn’t Always.”

This concert is personal for Andino.  He was deeply moved by Mr. Rogers as a child. Unable to connect directly with Fred Rogers, he cold-called a musician from the show in 1996 when he found the number in the Pittsburgh phone book. A couple of connections later, he was on the set. “I was almost overcome when he came out of makeup. He radiated compassion and kindness,” said Andino. “I went there just to say thank you, but frankly had trouble getting the words out because he kept asking me questions about myself. It was an unforgettable day for me.”

The concert celebrates the strong ties between the cathedral and Le Moyne.

Cathedral Rector Msgr. Neal Quartier heard about the concert in the fall and immediately offered the cathedral in order to share the concert with the community. “This is a perfect fit for two of the diocese’s best-known institutions,” said Msgr. Quartier. “The message of Fred Rogers dovetails with the inclusive communities that are cultivated and encouraged at the college and the cathedral. “

“He left a lasting impression,” Andino said of Rogers, who died in 2003. “Even the question he asked during every episode, ‘Won’t you be my neighbor?,’ was a gentle invitation, not a demand.”

A free will offering will be taken to support the work of the Fred Rogers Center and to support future Le Moyne-cathedral collaborations.