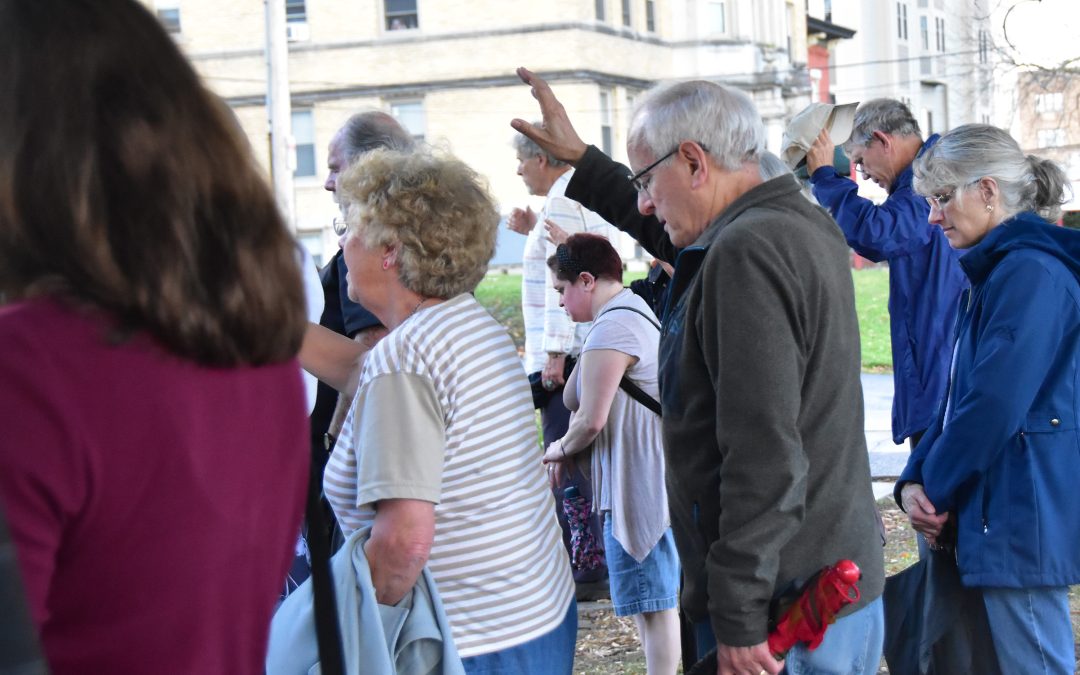 They are “mighty warriors” in a “spiritual battle” and they know triumph and tragedy.

The fall version of the 40 Days for Life Syracuse Campaign concluded Nov. 6 in front of Planned Parenthood, where volunteers pray in front of the sidewalk. They experience heckling, screaming, “the hand sign” and raunchy music played from a car, but the motto for 40 Days is “The beginning of the end of abortion.”

Worldwide, according to Shannon Guy, co-coordinator of the Syracuse Campaign with Jeanie Owens, hundreds of thousands of people united in prayer and fasting in a record 622 cities. Reported during the campaign, Guy said, were 278 babies and their moms spared the tragedy of abortion, and reports were still coming in. Since the 40 Days for Life organization began, 22,289 children’s lives had been spared, 242 abortion workers had quit their jobs and 131 abortion centers had closed. Since the 40 Days for Life Syracuse Campaign began 14 years ago, Guy said, about 84 babies have been saved.

“This is a spiritual battle,” said Bob Doody, of Forward Point Church in Syracuse, who led the attendees in prayer and song.

Sidewalk advocate for life and prayer warrior and Birthright of Syracuse volunteer Marilyn Duffy speaks at the closing ceremony for the fall 40 Days for Life Syracuse Campaign in front of Planned Parenthood. (Sun photo | Tom Maguire)

God has been merciful to allow him to “participate with mighty warriors,” said another participant, Minister Yahu Yasharahla of King Ministry in Syracuse. His fellow King Ministry Minister Aaron Avraham said, “Absolutely agreed that It’s mighty work. Like the Scripture says, we are here to protect innocent life.”

“God is on our side,” said year-round sidewalk advocate for life and prayer warrior and Birthright of Syracuse volunteer Marilyn Duffy. “He’s moving. And he’s doing it. And we are his warriors. And together, we will overcome this place.”

“In Syracuse we know of two women that have changed their mind and chose life for their baby before the campaign even began, and it was a huge blessing to assist them,” Co-coordinator Guy said. And one of the women moved into Joseph’s House, which provides a safe home and family environment for moms and babies who are experiencing homelessness or housing insecurity.

Guy’s Co-coordinator Owens asked the attendees to keep in prayer a woman who did not choose life despite the hoping and praying that went on for her. “Eventually the pressure became too much for her,” Owens said. “And she did go through with an abortion. We were there for her after that too, and continue to reach out to her and tell her about all the healing ministries, including Project Rachel Ministry; and New Hope (Family Services, which had a mobile unit parked across from Planned Parenthood during the campaign) has a great healing ministry also.

“So please, we all know somebody who’s had an abortion. Reach out to them; it’s time for healing. Once they heal, they can help be a healer for other people. And it’s powerful to have somebody out on the sidewalk who’s been through it, and just pleading with a woman: Please, this is not the right way to go; it ruined my life.”

Sidewalk prayer warrior James Mostrom said that several times, an individual has parked his car near the prayer warriors’ space and played “pretty raunchy music.” Mostrom’s reaction? “Just try to pray for him because he’s obviously a very troubled person.”

Mostrom’s wife, Elizabeth (Betsy) Mostrom, a sidewalk counselor in front of Planned Parenthood, said: “You … try to let them know verbally there’s help. . … Maybe someone turned away. I do not know. But at least we were here. And you get a lot of traffic. … It makes you want to keep coming back because you’re doing a good work here by letting women know there’s help” so they don’t have to go through with an abortion.

Michele Ryan prays the rosary after the ceremony.

Prayer warrior Raymond Keough, who goes to Believers’ Chapel Fulton, said he attended the closing ceremony “because for many years, I’ve been a supporter, I’ve been a pro-life person. And I think it’s one of the most heinous sins that you can possibly conjure up, the murdering of babies, God’s babies. Now, I don’t know how anybody can justify that.”

Keough said he was talking one time with a Watertown man who pulled up at Planned Parenthood when “somebody went by and gave us the hand sign and screaming at us and this and that.

“And he says to me, ‘I used to be one of them people. I used to be lost … just exactly like those people,’ he says, ‘and one day, I was sitting at my desk, and I started shaking. The Lord got ahold of me, and from that moment I’ve been saved. And I’m a follower of Jesus Christ.’ That’s a beautiful witness right there.”

Co-coordinator Owens asked the attendees to continue to spread the word about 40 Days for Life: “This is going to be a great time in between campaigns to just talk to people about what we’ve been doing and what we do when we come out here to pray. We’re really going to try and get a couple of sidewalk-advocates training (sessions) in between the campaigns.”