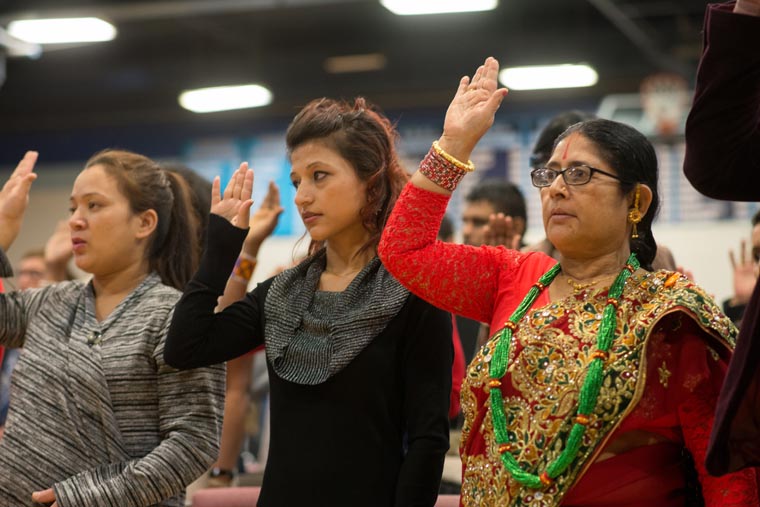 Sixty-one people from 29 countries took the oath of citizenship during a ceremony at Bishop Grimes Junior/Senior High School in East Syracuse.

“Look upon these brave individuals and see the image of America itself,” Zachary Jones, student council president, told the crowd of new Americans, their relatives and friends, and Bishop Grimes’ student body.

Hon. Thérèse Wiley Dancks, presiding U.S. Magistrate Judge and a 1977 Bishop Grimes graduate, presided over the ceremony. After the immigrants pledged to “absolutely and entirely renounce and abjure all allegiance and fidelity” to any other nation, Dancks shook hands with or hugged every new American.

Neither the judge or most of the speakers directly mentioned President Donald Trump’s controversial executive orders on immigration and refugee entry to the United States. In a special Mass Sunday, Bishop Robert Cunningham called “blanket refusals to allow immigrants from a given nation, ethnic or religious group to enter our country… un-American and un-Christian.”

Bakundi Salvator arrived in Syracuse in 2007 after fleeing war in Burundi. “My country is not good now,” he said before the ceremony. “Here I like the people. I like America.”

All photos for the Sun by Richard Mossotti