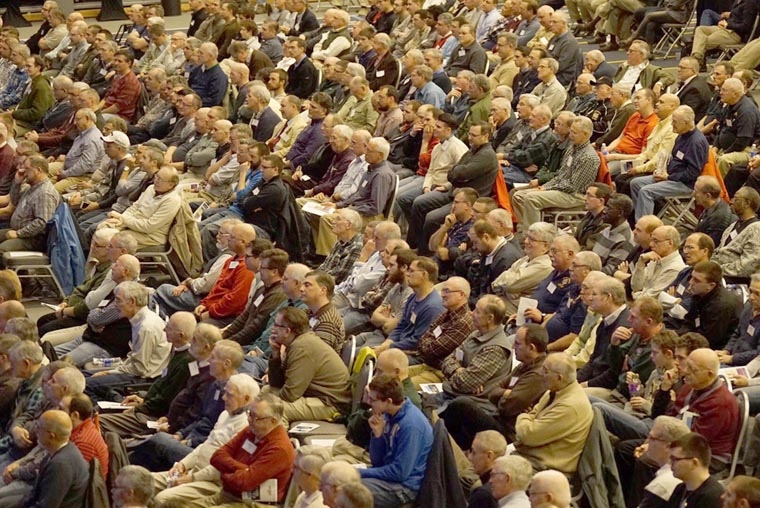 Men from across the diocese and beyond filled the SRC Arena and Events Center March 21 for the seventh annual IGNITE Catholic Men’s Conference.

More than 900 attendees joined Bishop Robert J. Cunningham for Mass to begin the daylong event. He spoke to the theme of the conference — “Rise up. Be strong. You are sent.” — by underlining the important role of fathers in the family.

“Keep in mind the message of some of the Super Bowl commercials — ‘What makes a man stronger is showing that he cares’ and follow the wise advice of Pope Francis who encourages you to be actively present to your children. Be confident that the Church, our mother, is committed to supporting with all her strength the good and generous presence of fathers in families, for they are the irreplaceable guardians and mediators of faith in goodness, of faith in justice and in God’s protection, like St. Joseph,” he said. [Editor’s note: Read the full text of Bishop Cunningham’s homily on page 3 of this issue.]

Apologist, documentarian and author Steve Ray was the day’s first speaker, illuminating the life of St. Paul from his early education in the Jewish tradition to his radical conversion to Christianity to his missionary work across what was Asia Minor. Noting that there was no man more manly nor who lived the Catholic life better than St. Paul, Ray urged the men in the crowd to have the same missionary zeal for and commitment to sharing the faith.

Curtis Martin, president and founder of the Fellowship of Catholic University Students, told those in the crowd that “we have to up our game because what we’ve been doing isn’t getting the job done.” He called on men to set the world on fire, but said they first need to become who God means them to be. Martin offered suggestions for strengthening their prayer lives, urging them to spend a few minutes with the Gospel every day, and supporting one another in their efforts. “There is no replacement for you not getting in the game,” he said, adding that “all-powerful God cannot steer a parked car. We have to move.”

Father Larry Richards fired up the crowd at the end of the day with a no-holds-barred talk on love — loving God, loving family and knowing God’s love for his children. He told the men, “You can surrender your dust to him now, and he’ll take your life and give you his,” and got the entire arena on their feet to publicly recommit their lives to Christ. He asked the men if their wives, kids and employees could say, “If Jesus is anything like you, I can’t wait to meet him.” “If the answer’s no, gentlemen,” he said, “we’ve got to get out of the way and we’ve got to show them Jesus.” Father Richards sent the men home with a mission: to tell their wives and children how much they are loved, saying only “wimps” can’t express that, and to write them letters telling them exactly why they are loved. “No more excuses,” he said.