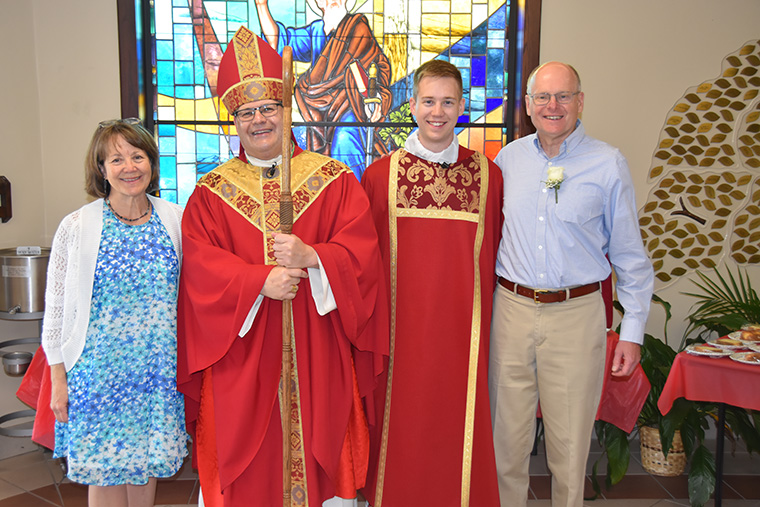 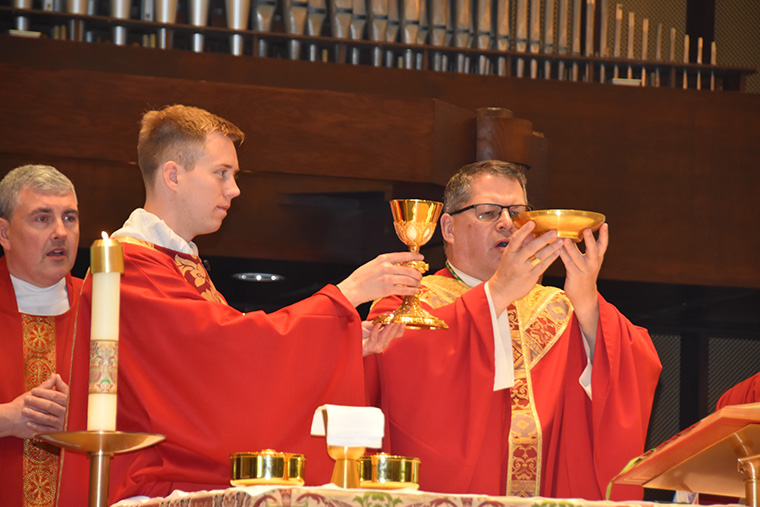 The new deacon, James Buttner, assists at the Mass.

The first step in Holy Orders to the priesthood

Seminarian James Buttner took a significant, joyous step Saturday in his journey toward priesthood when he was ordained to the Order of Deacon by Bishop Douglas J. Lucia.

The ordination took place in a familiar setting, Reverend Mister Buttner’s home parish, Holy Family Church in Fairmount. Ordination as a transitional deacon takes place about a year before a man is ordained as a priest.

The ordination Mass was attended by many relatives, friends and members of the diocesan clergy, and was celebrated on the Feast of St. Matthias, the apostle chosen to replace Judas.

In his homily during the ordination Mass, Bishop Lucia referred to Matthias as “another light to the nations to help cast out the darkness.” He went on to reference the institution of the Order of Deacons as described in the Acts of the Apostles, saying “there is a special need for this light to be seen in charitable action for the needy and the marginalized in the early Christian community.” He then spoke directly to James, recognizing that he has “chosen to respond to the Church’s call to dedicate your life to the service of the people of God.”

“What does it mean to be a deacon?” asked Bishop Lucia. He answered, quoting Pope emeritus Benedict XVI, who as Archbishop Joseph Ratzinger of Munich stated, “This is the central aspect of the mystery of Jesus Christ, the fact that the Lord of us all is a deacon … a servant who … thus reveals to us the mystery of God’s love.”

Quoting from the official instruction of the Church for the Ordination of a Deacon, Bishop Lucia added that “strengthened by the gift of the Holy Spirit, James will help the Bishop and his priests in the ministry of the Word, of the Altar and of Charity, showing himself to be a servant to all.” 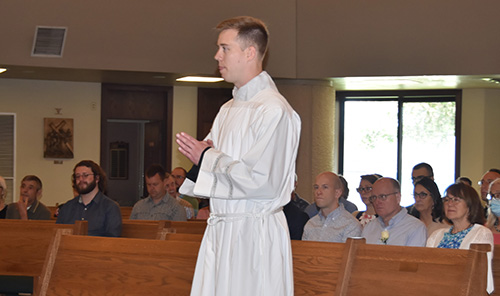 James is called forth from the congregation to receive the Sacrament of Holy Orders.

In a pre-ordination interview with The Catholic Sun, James showed himself to be fully aware of the importance of this call.

“We talk about ordination to the priesthood, but diaconate ordination is the definitive moment where I will make the promises,” he told us.“Diaconate is an important ministry in and of itself. It’s exciting!” James went on to say that “there is a real wisdom in the Church, that the diaconate is always the foundational part of the sacrament of Holy Orders. The whole nature of Holy Orders is to serve, the Church and all the people. Once a deacon, always a deacon.” James looks to the model of Christ the Servant as the proper role model for the service aspect of his ministry, be it service at the altar or the greater community.

Following his diaconal ordination, James will return to his studies to finish his degree program at Catholic University of America in Washington, D.C., in anticipation of his ordination to the priesthood next June. As a transitional deacon, though, this coming year will be somewhat different than what he has experienced thus far in the seminary.

“My role in the seminary house community will change. I will assist at the house liturgies as a deacon. … When I come home at Christmas and Easter I will be assisting at the parish as a deacon, both in liturgy and the works of the church.” Deacon Buttner will also assist in those works at the seminary by bringing Communion to those who are ill and will undertake various charitable works. His current parish assignment when he is in Syracuse is at Holy Cross Church in DeWitt. “That’s where I was for my pastoral year and will be returning there this summer. It’s a privilege to be back there.”

Deacon Buttner shares that his family is very excited for him. “I’ve been discerning this call for a number of years, and I have found a real joy growing into this vocation.” He adds that his parents share that joy; they are proud of him and all their children, sharing that his mother’s “pride of her children doesn’t depend on what we do. … It runs deeper than that. … There is unconditional support from home whether I follow this path or something else God calls me to.”

And there is no doubt that James Buttner is indeed called.