A good and holy cause

The case for the sainthood of Blessed Mother Marianne Cope may have paused at the gates of Rome, but the efforts of her Franciscan sisters in the diocese that she once called home continue unabated.

In addition to working meticulously to promote the Syracuse Diocese’s only  person to be declared “blessed,” one step before canonization, the sisters endeavor to expand the spirit of Blessed Marianne’s example both at home and abroad. 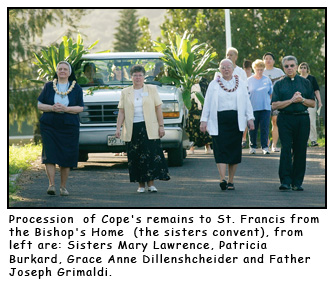 On Aug. 9, the anniversary of Mother Marianne’s death, the sisters will hold a special service at St. Anthony’s Convent in Syracuse, which holds the Reliquary of Blessed Marianne. While the Aug. 9 event is open to the public, the Franciscan sisters are keen to stress what they consider to be a more important public event: the service held on her Feast Day, Jan. 23.

“On Aug. 9, the anniversary of Mother Marriane’s death we have a special Mass.  The sisters from our nearby convents attend with us.  Naturally the public is invited too, but we’re not going to feature this occassion in a large way publicly for the reason the big day for public celebration is Jan. 23, which was pronounced her feast day by the Vatican,” said Sister Mary Laurence Hanley, OSF. “On Jan. 23, the bishop generally has been the celebrant of the liturgy and we sing the Mother Marianne hymn and so forth.”

In addition, the canonization of Father Damien de Veuster, the Belgian priest Mother Marianne served with on the Hawaiian island of Moloka’i, will be held on Oct. 11.

Several representatives from Mother Marianne’s Franciscan order will attend Father Damien’s canonization including Sister Mary Laurence, director/historian of the cause, and Sister Patricia Burkard, OSF, General Minister of the Sisters of St. Francis will attend the canonization. Several Franciscan sisters from Hawaii will join them in Rome.

Father Damien was born in Belgium and was a member of the Congregation of the Sacred Hearts of Jesus and Mary.

Even the grounds that Father Damien and Mother Marianne ministered upon will soon be honored. To this day, Kalaupapa remains inhabited by approximately 20 individuals suffering from Hansen’s Disease. After those individuals leave, the National Parks Service will develop strategies for addressing issues relevant to natural and cultural resources management and visitor use of the grounds. The future use of the buildings will be identified by those studying the future of the Park.

Sister Patricia recently met with the committee in charge of converting the park.

“Sister Patricia Burkard met with them when she was there so that the role of the sisters with the women and girls, as well as Mother Marianne’s administrative role, would not be neglected,” said Sister Grace Ann Dillenschneider, OSF. “What are they going to do with all those buildings? Who is going to be responsible for them? How will they show the history of what occurred and the sacrifices that were made by the people there. How will they honor the strenth of spirit that existed among the people are all questions to be decided”

In addition, Sister Mary Laurence noted that their head administrator, Sister Patricia, has stressed that the Franciscan sisters wish to sustain a presence on the island.

Finally, two documentaries, one cinematic and one video, are being made regarding the life of Father Damien.

The Franciscan sisters hope Mother Marianne’s own canonization will not be far behind.

While Mother Marianne’s potential cause for sainthood enjoys the support of several important figures in the church hierarchy, the Franciscan sisters are advocating for her cause very deliberately.

“There are those in Rome who are interested in Mother Marianne’s cause. However, we don’t have a miracle in Rome that they can be working on or thinking about,” Sister Grace Anne said. “We have to insure that any possible miracle is very thoroughly researched so that when it is taken to Rome, we can be pretty sure they will accept it. When it is sent to Rome it goes through the process of scrutiny over there.”

Various church officials participate in the investigation of any miracle including such groups as a medical team and a theological team. All work is conducted under the auspices of the chancery of the diocese in which the alleged miracle took place.

“We are blessed, but we can always be more blessed,” she said.