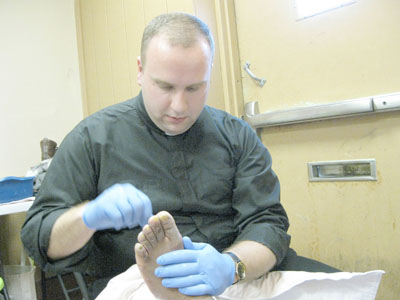 Holy Thursday around the world means priests, bishops and even the pope take on the humble task of washing the feet of 12 people representing the 12 Apostles. Father John Manno, pastor of St. James Church in Syracuse’s Valley neighborhood, spent Holy Thursday at the same place he did last year, the Oxford Street Inn.

His parish has developed an even stronger connection with the homeless shelter since he became pastor a couple of years ago. There was a quiet sandwich making program going on at the parish for years. Now, St. James has partnered with other parishes and community groups and expanded its service to the place commonly known as “the Ox.”

It was bitter cold in February of 2009 when the parish decided a hot meal was in order and about 10 parishioners, along with Father Manno, brought warm goulash and cornbread to the men at the Ox. There are  approximately 120 men who come for an evening meal — usually a cold sandwich — and a night’s sleep on one of the many worn mattresses that fill the old industrial building.

Since that first winter experience, the parish began bringing a warm meal to the men every fourth Monday of the month. They wash the feet of men every month as well. And they bring more than 100 cupcakes to recognize all the men who have celebrated birthdays that month. Students at Holy Cross School make the birthday cards. On all the major holidays they bring hot coffee and baked goods to the men at about 6:30 a.m. because they have to be out of the Ox for the day at 7:30 a.m. They planned an Easter morning visit this year.

On this Holy Thursday they brought about 250 pairs of used men’s shoes and 650 pairs of new socks collected by Holy Cross Church in DeWitt, one of St. James’ partners in outreach. A rotating group of parishioners brought dishpans of warm, soapy water and they gently washed the feet of the homeless men, carefully tending to them. Some of the volunteers are nurses so they are very good about foot care for the men who spend days on their feet without clean socks or proper footwear.

Sheila Austin is a nurse and a St. James parishioner. She thought her work on various committees at her parish was enough until she said Father Manno pushed the parishioners further.

“When he came he saw everything we were doing for the parish and he said it was great but he kept asking, ‘What else do you do?’” Austin said.

His prodding moved the people forward and the connection with the Ox developed.  Austin said there are 50 to 60 people involved in the ministry now. The volunteering has made a major impact on Austin and the others who visit the shelter. Austin has begun to travel with extra pairs of clean socks in her car. When she sees someone on the street who is homeless, she offers them a pair of fresh socks. She even has Father Manno doing the same thing these days.

“You don’t want to be with me at the dinner table because this is all I can talk about,” Austin said.

Before they got started on Holy Thursday, Father Manno brought the volunteers together like a football coach and led them in prayer before they served the men. “We thank you for all the resources You have blessed us with. Because of You we know that in all the men that come through that door, we will see your face,” Father Manno prayed.

The groups divided and some went off to wash the feet of the men and some went into the garage where they distributed the shoes and socks.

Brenda Casinelli from Holy Cross was busy sorting shoes by size. She was there to volunteer with her husband, Chris.

“I just started doing this recently,” Casinelli said. “Will I come back? Absolutely.“

J.D. Tessier, also from Holy Cross Parish, has been a regular volunteer for a while. “I’ve made a lot of friends down here,” he said. “Sometimes they just need someone to listen to them.”

Father Manno walked around chatting with the men, asking them how their day went and whether or not they wanted their feet washed that day.

“When I got to St. James a couple of years ago, one thing I mentioned was that we could extend ourselves beyond our four walls,” Father Manno said. “They do a lot of great stuff for St. James but we’re called to reach out. We just took a look at what we were already a part of and enhanced that.”

The men at the Ox were happy to have the extra attention and the new shoes and socks. As the evening continued, more men came to have their feet washed and  to eat the warm meal the parishioners would be bringing later. Some of the volunteers spend their time just walking around and chatting with the men.

Donna Rawson, who works at a Solvay Bank during the day, has committed herself to visiting the Ox more frequently. She has gotten to know some of the men and makes sure she takes the time to have a conversation with them. The new ministry has changed her life for the better. Rawson said she just felt called to “do more.”

St. James Parish volunteers plan to keep their ministry going and Father Manno is pleased to help them by talking about the ministry from the pulpit and by being present with them.

“Holy Thursday has always been my favorite liturgy,” Sheila Austin said. “I wouldn’t want to be anywhere else today. I get it now. I get what Father Manno has been talking about.”