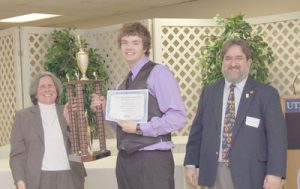 ROME — Rome Catholic senior James Kobylanski’s goal is to become a cyber forensics attorney and he is now well on his way.

On March 27, he earned senior level grand champion honors at the Utica College Regional Science Fair. Kobylanski won many prizes for his project, “You Catch More Flies with Honey,” including a two-year half-tuition scholarship at Utica College, the opportunity to compete in the 2010 Intel International Science and Engineering Fair in San Jose, Calif. in May and a laptop computer.

“It’s a dream come true that I can go to Utica College,” said Kobylanski. The teen had planned to attend nearby Mohawk Community College before winning the scholarship.

Kobylanski plans to enter his project in the upcoming fair in California after making some revisions and tweaking the quality of the project.

Kobylanski gave the laptop computer he won in the competition to his project assistant/partner, Rome Catholic senior Patrick Riollo. Kobylanski’s assistant helped him gather and sort the data for completing the project and he felt extremely grateful for Riollo’s help.

When Kobylanski heard he had won, he said he felt light-headed. “I almost fell out of my chair,” he remembered. “My father cried — its one of the two times that I’ve ever seen my father cry. My parents have been huge supporters — they’re a big part of my success.”

Nearly 70 students from the area’s schools competed in the fair this year. “The fair is held each year in order to stimulate an active interest in science and engineering while providing an educational experience and public recognition to talented students,” said Lawrence Aaronson, Utica College professor of biology and science fair director.

In September, Sandra Engle, Rome Catholic cyber security teacher and technology mentor, received an email from an employee of a company in Arizona. After learning about the school’s cyber security program, he inquired about their knowledge and capacity of Intrusion Detection Systems, also called honey pots. He asked if a member of the cyber security team would design, implement, test and share the technology.

Kobylanski and Engle were excited about taking on the experiment, but they declined the offer, realizing that they didn’t have the means, assets or abilities to accomplish the task.

“After formally declining the offer, the idea was born for my would-be project, ‘You Catch More Flies with Honey,’“ said Kobylanski. “The logic went something like this: while I couldn’t contribute to the intrusion detection world on a professional level, I could certainly create a microcosm of the world, in order to see what an intruder to the Rome Catholic Cyber Infrastructure might desire access to.”

The purpose of the project was to prioritize potential cyber security threats at the school. This was done in order to illuminate the areas that require more security protocols; security protocols in the form of intrusion detection systems, or Honey Pots, which monitor and protect a server on which a vast number of systems reside.

The procedure for the experiment included collecting, interpreting and graphing data from Rome Catholic students in grades seven through 12.

For about a week, the data was collected and organized and then it was processed and interpreted. In the following weeks, the data was recorded, plotted and graphed according to the spectrums that the hypotheses demanded.

Finally, the conclusions were drawn and posted, and the ideas for a follow-up study were established.

Kobylanski began to work on the project September 28 and averaged 1 1/2 hours per day.

“The project has been a joy to create and apply, and has brought everyone involved, especially myself, a fulfilling and rewarding experience,” he said.

Rome Catholic is extremely proud of its students. An additional five young people earned special awards at the science fair. Alexander Rudiak was honored for his project entitled “Feed your Head, Does Brain Food Really Make you Smarter?” He tested the effect of food on the intelligence of mice by feeding them either vitamins or organic food. The result of his experiment proved organic food worked faster in the mice’s brains.

Andrew Jeselson tested snowflakes from five different regions for PH levels and cleanliness in his project entitled “What’s in Your Snowflake?”

Katy Stanton and Brooke Costello worked together on their “Heartbeat vs. Music Beat” project. They discovered that one’s heart rate is affected by music.

Joseph Stanton explored the core of a computer operating system with his project “Computing Kernels.”