It takes all ages 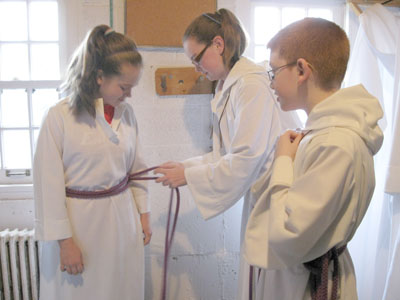 Anna Cummings watched the altar servers walking in the procession at her parish for “years” before she finally got the chance to do it herself. Today, she’s a a sixth grader and a seasoned altar server for daily Mass at her school’s parish, Blessed Sacrament in Syracuse’s Eastwood neighborhood.

Anna and a few of her classmates gathered recently to talk about their experiences as altar servers. They’ll be moving on to junior high school next fall and all the youngsters said they will continue to serve.
They — Anna, Katy McInerney, Daniel Kelly and Griffin Walker — were trained by Blessed Sacrament’s parochial vicar, Father Kevin Maloney.

“You guys were in first grade when I first came here,” Father Kevin said. “I was here for your First Communion.”

Even though they were trained, the youngsters still had a case of the jitters their first time altar serving.

“I was so scared,” Daniel said. “I thought I was going to drop something.”

“My parents thought I might drop the Eucharist,” Griffin said.

“You don’t want to mess up in front of everyone,” Katy said.

Now Father Kevin explained, these servers help the younger ones learn the ropes, no pun intended. And if there are a few mistakes along the way, he and Blessed Sacrament pastor Father Peter Reddick try to be understanding.

“We may give them a gentle nod here and there,” Father Kevin said. “You learn from your mistakes and the best practice is being up there.”

The late Father Joseph Champlin wrote a book, The Joy of Being an Altar Server in 2002 and he explained all the steps that go into an altar server understanding his or her role during the Mass. Given that the book is nearly 100 pages long, one could say the altar servers are definitely an important part of the Eucharistic celebration.

Father Champlin wrote that the servers wear white robes in remembrance of their baptismal robe. He even reminds the servers how important it is that they pray and “take good advantage of those quiet moments” during the Mass because members of the congregation will notice and benefit by their example.

Now that the servers are more comfortable serving, they relax more and think less about making mistakes. They oftentimes serve with their good friends as well as their siblings.

“I know the favorite time for me and Griffin altar serving. It was a few Saturdays ago at the St. Patrick’s Day Mass at the Cathedral. Now that’s a little scary,” Daniel said.

The altar servers said Father Maloney was a good teacher and that they had the opportunity to ask him questions.

“I didn’t ask any questions. I was so determined not to mess up. I had a million questions but I didn’t want to ask,” Anna said.

In other parishes, a lay person may be the one to provide the training for altar servers. Mary Lewis has been helping altar servers at Our Lady of Sorrows Parish in Vestal since 1987. She joined the parish 61 years ago in 1949 and learned much of her craft by years of daily Mass attendance. Lewis used to help at the altar herself until her hands became too shaky.

She explained that back in 1987 Father Sean O’Brien was a seminarian at the parish and he asked her for some help in training the youngsters.

“I wasn’t too involved in the parish work before that. Father O’Brien was taking courses at Binghamton University and he needed someone to help train the altar servers,” Lewis explained. “We used to train them in October but then I began running into football and soccer practice so we moved the training to February.”

Lewis’ training lasts for three consecutive Saturday mornings and she covers all the details in preparation for the server’s first time. And she said she doesn’t like to schedule more than one new server per Mass. She admitted she has been pleasantly surprised by how well they’ve done when more than one newcomer has stepped up to serve at the same Mass.

“I enjoy watching them while they learn and as they get more confidence,” Lewis said.

One of her earlier trainees was Zachary Miller. He is now a seminarian studying for the diocese.

Have Daniel and Griffin ever thought of becoming a priest someday?

“But then you’ve got to know what to say when to say it and how to say it,” Daniel said.

“They teach you all of that in the seminary,” Father Kevin told him.