‘A model deacon’ — and a very steady dentist 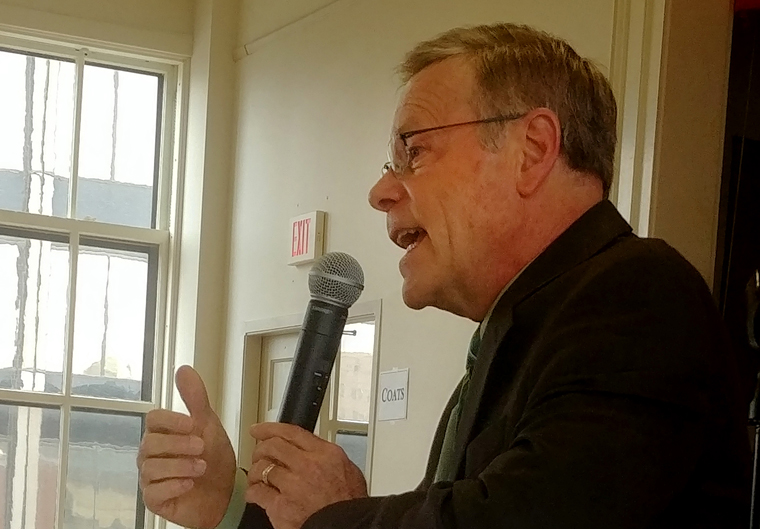 Deacon Robert Fangio, DDS, has been called upon to serve his parish, his diocese, and, on one occasion, a “boa constrictor.”

Reviewing his vocation and his career at a recent “Soup & Scripture” talk to diocesan employees, Dentist Fangio recalled the time he saved a very big man’s ability to chew his food. The man got up out of the dental chair “and he gives me a hug. Now, again, this is a 300-pound man. There’s a 135-pound man in his chest. And my face is literally gone. … He’s just hanging on, he’s just so grateful for what I’ve done. I know what the hug of a boa constrictor must feel like now. That’s gratitude.”

That thankfulness motivates Deacon Fangio to keep going. After practicing general dentistry for about 34 years, he retired. But he said: “My hands don’t shake yet. My eyes are still pretty good. I’m still pretty gentle in the chair with people. I’m a real wimp — I hate hurting people.”

So he realized he “could really do something very significant here”: volunteering at Amaus Dental Services (https://www.amausdentalservices.com/), a free clinic in Syracuse. The only similar clinic Upstate, Deacon Fangio said, is in Rochester.

WHAT A WELCOME MAT

“We treat the underserved and underinsured, all over Central New York,” he said, “and believe me, people come from all over. We have refugees, we have homeless, we have single moms, we have people who are living on fixed incomes — they break a tooth and they have nowhere else to go.”

Amaus Dental Director Dr. David R. Dasher said in an email: “Bob Fangio is vital to the success of Amaus Dental Services. His delivery of quality dental care in a compassionate way epitomizes our mission at Amaus.”

As he works on patients, Dr. Fangio wears a special optical instrument to see better. Going all the way back to his youth, he has always sought to discern the right moves. A cradle Catholic whose mother thought he looked Irish even though he is actually Italian, Deacon Fangio saw three possible directions after he graduated from Bishop Ludden Jr./Sr. High School: teaching, the priesthood, or the medical profession.

He majored in biology at Le Moyne College, but he did not relish the idea of becoming a doctor and having to tell a patient that he or she had six months to live. So he thought that “dentistry’s kind of good” because the worst scenario might be losing a tooth: “not the end of the world.” 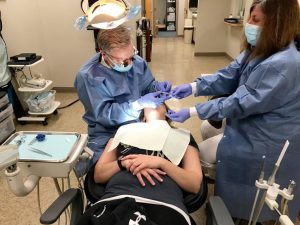 Deacon Robert Fangio, DDS, and Dental Assistant Cindy Johnson work with a patient at Amaus Dental Services in Syracuse. Amaus, a free outreach of the Cathedral of the Immaculate Conception, serves people who find themselves unemployed, homeless, or without dental insurance. “She works with me every week donating her services!” Dr. Fangio says of Dental Assistant Johnson.
(PHOTO COURTESY AMAUS DENTAL SERVICEs
)

So he applied to the University at Buffalo’s dental school, where the dean asked him how, considering his thoroughly Catholic upbringing, he would handle the very difficult curriculum.

The future dentist respectfully disagreed with the implication that his Catholic background had sheltered him. He responded that it gave him confidence, courage, strength, and support. He found out afterward that the dean was in the Knights of Columbus and that was exactly what he had wanted to hear.

Now he has two children; three grandchildren; a wife of 33 years, Mary; and a post as assistant director of deacon personnel working with his good friend Deacon Gregory Cross. So Deacon Fangio has followed all three directions he had envisioned in his youth, with his service in the diaconate satisfying his religious calling.  His home parish is Holy Family in Fairmount, and he loves it so much he would assist on the altar at all six of the weekend Masses if he could.

“I chose Deacon Fangio to assist the Deacon Personnel Office because he personifies ‘service,’” Director of Deacon Personnel Cross said in an email. “He is truly a model deacon and should be an inspiration for all of our brother deacons. His willingness to take the initiative in the many planning and administrative tasks of the Personnel Office as well as his positive and steady demeanor all contribute to programs completed well and on time for the benefit of our community of deacons. To know that Bob retired from his very successful dental practice upon ordination to fully dedicate himself to serving the people of God is all one needs to understand his heart and his spiritual depth.”

Deacon Fangio approaches most things with courage, passion, love, and enthusiasm. His speaking style — warm and stimulating — complemented the soup at the employees’ gathering.

Entrusted with dental ability, he feels compelled to use it. And who benefits? Luke 10:27 says: “You shall love the Lord, your God, with all your heart, … and your neighbor as yourself.” The deacon figures he can’t repay the Lord for his gifts, but he can certainly view his patients as his beloved neighbors.

Similarly, Dr. Fangio lives by 1 Corinthians, 12:7: “To each individual the manifestation of the Spirit is given for some benefit.” The benefit of dentistry, he said, is “more than medicine, more than medical, for sure.” Talents become spiritual gifts when they are shared for the glory of God’s kingdom, he believes. “If you live a life of service, and humility, and righteousness,” he said, “your reward is great” in heaven and on earth.

First is the gift of gratitude shown by patients such as the man with the crushing hug. That was a very challenging case. With the help of a tooth-colored chemical, Dr. Bob rebuilt a tooth that was three-quarters broken, when some dentists might have put a crown over it or pulled it. In a case like that, Dr. Fangio looks heavenward. “I didn’t do that myself,” he said. “There’s no way. This is just awesome; it worked out so great.”

The second big reward, he said, is seeing the fruits of one’s labor.

One day back when Brother Fangio was teaching in Albany, Pope St. John Paul II was shot. The brother went into class and asked the students to pray. One student raised his hand and asked, “Does this mean that we don’t have school tomorrow?” Brother Robert asked himself: Is this worth it?

Ten years later in his dental office, that same young man, who had a great job and was very active in the parish, came in not fully realizing the identity of the dentist. He looked at him and said, “Brother Robert?”

“Not anymore,” Dr. Fangio said with a playful inflection that told him who the boss was.

The third reward is being an example — in the spirit of evangelization — to one who wants to become a Catholic. The deacon cited a patient who met with him for pizza in Tully. The man told him there were several occasions when a Catholic person made a huge difference in his life. He told Deacon Fangio he would like to know more of what it takes to become a Catholic; he now plans on enrolling in the Rite of Christian Initiation of Adults program in a parish close to where he lives.

Deacon Fangio has good news for individuals who lack the gift of saving people’s ability to chew their food.

Every person has a unique shareable gift from the Spirit, he said, and “no gift is too small.”