Advocates stress that U.S. has moral obligation to welcome refugees 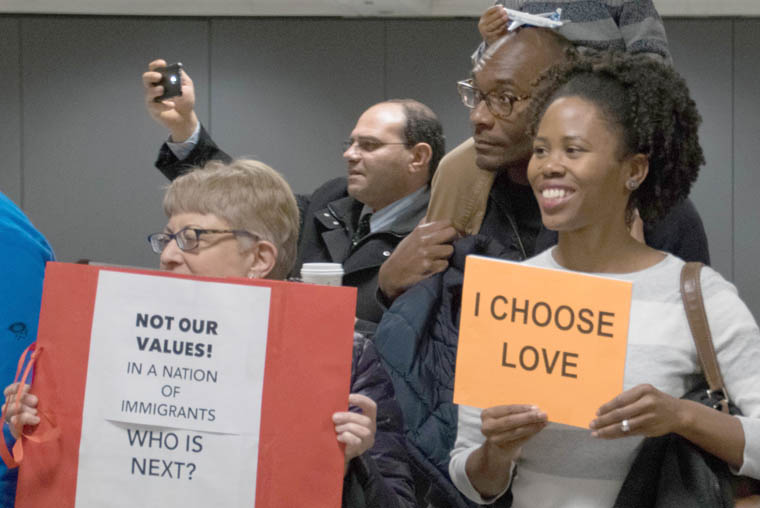 WASHINGTON (CNS) — Leaders from six organizations want Americans and President Donald Trump to understand that refugees, especially those from war-torn Middle Eastern countries, are average people with careers, comfortable homes and loving families rather than see them as a monolithic threat to the United States.

Their appeal during a Feb. 1 news conference at Casa Italiana at Holy Rosary Church in Washington came as refugees continued to be denied entry into the U.S. nearly a week after Trump ordered a 120-day suspension of the U.S. refugee resettlement program.

Officials of Catholic Charities USA, Migration and Refugee Services of the U.S. Conference of Catholic Bishops, Catholic Legal Immigration Network Inc., Catholic Relief Services, the Association of Catholic Colleges and Universities and the Center for Migration Studies called on Trump to rescind his presidential memorandum implementing the suspension, saying the country has a moral obligation to welcome people fleeing for their lives.

They called the world’s refugee crisis a pro-life issue.

“One of the issues for many of us in this country is that we can’t imagine that the refugee is a person like ourselves, that many of the people that are now caught in camps or horrible situations are people like ourselves who woke up one morning and learned that everything they had was destroyed,” said Dominican Sister Donna Markham, president and CEO of Catholic Charities USA.

“We all have to stop objectifying them. These are human beings like you and I,” she said, recalling the people in northern Iraq she recently contacted via online video communications.

Other leaders cited the country’s long history of welcoming refugees as well as church teaching on welcoming the stranger. They said the U.S. should not relinquish its role as a moral leader in refugee resettlement, especially for those who have been cleared or are awaiting final approval to enter the country. Any delay in their arrival puts them at greater threat, the leaders said.

Welcoming refugees can be an act that not only protects them but also protects U.S. security, said Don Kerwin, executive director of the Center for Migration Studies in New York City. “It’s not really a balance. Refugee protection actually advances and furthers security,” he said.

“That doesn’t mean that there doesn’t have to be careful screening and that there’s responsibilities for improving that screening based on intelligence,” Kerwin added. “Those need to be implemented. But the fact is we have a very, very secure screening process for refugees. It’s more secure than any other admission process for any other category of immigrants.”

Trump’s memorandum, one of three governing immigration issues during the first week of his administration, suspends the entire U.S. refugee resettlement program for 120 days and bans entry of all citizens from seven majority-Muslim countries — Syria, Iraq, Iran, Sudan, Libya, Yemen and Somalia — for 90 days. It also establishes religious criteria for refugees, proposing to give priority to religious minorities over others who may have equally compelling refugee claims.

The resettlement program’s suspension also will affect about 700 employees of Catholic Charities agencies nationwide, with layoffs expected for nearly all of the workers because the stream of refugees has ended, said Sister Markham.

“We absolutely depend on the partnership between public and private funding to support these programs,” she explained. “We don’t have the resources to carry them without that partnership. Four months carrying 700 employees with no income is not feasible for a charitable organization like Catholic Charities.”

The bishops’ MRS department in conjunction with diocesan Catholic Charities agencies resettled about 23,000 of the nearly 85,000 refugees admitted into the U.S. in fiscal year 2016. The majority of them were women and children, said William Canny, MRS executive director.

The number of refugees resettled is a small proportion of the 21 million refugees tallied worldwide by the office of the U.N. High Commissioner for Refugees, Canny noted.

He also expressed concern that the resettlement program had enjoyed bipartisan support from Congress and Democratic and Republican White Houses over the years, but that “in the last year or so we saw a breakdown” in such backing.

Trump’s other executive memoranda — one calling for a surge in immigrant detention and deportation and the other setting the stage to build a multibillion dollar 2,000 mile wall along the U.S.-Mexico border — drew criticism from Jean Atkinson, executive director of the Catholic Legal Immigration Network.

An increase in enforcement by federal and local officials “threatens due process and makes our communities and their residents, American and foreign-born, less safe,” Atkinson said. “We’re already seeing men and women afraid to go out into their communities, to go to work, to take their children to school to take them to medical appointments.”

While the organizational leaders pledged to advocate for refugees as long as needed, they also invited Catholics to voice their objection to the president’s actions.

J. Kevin Appleby, senior director of international migration policy at the Center for Migration Studies, said if Catholics mobilized, they could influence the president to change his mind.
“This is a really important moment for Catholics in our country,” he said. “The church is in a particular position to influence this administration I think in positive ways on these issue. Catholics voted for President Trump for various reasons, so they have the ability to convince the administration that they are on the wrong course.”