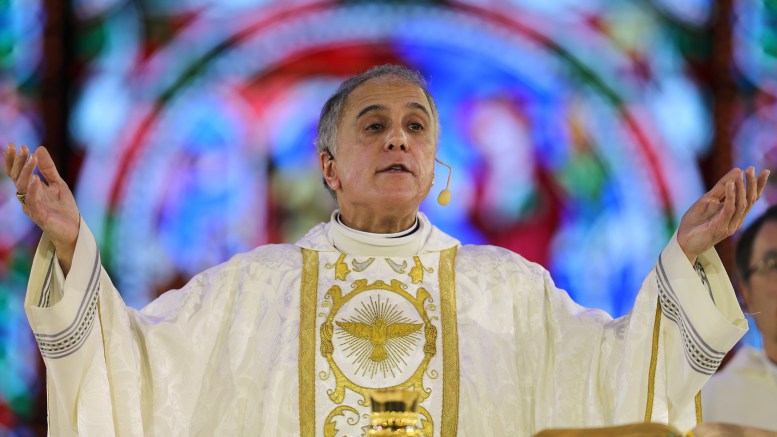 Cardinal Daniel N. DiNardo of Galveston-Houston, president of the U.S. Conference of Catholic Bishops, concelebrates Mass at the Convocation of Catholic Leaders in 2017 in Orlando, Fla. (CNS photo | Bob Roller)

“I myself am filled with hope,” he said, “but I also realize all these things might take purpose and time.”

The cardinal spoke following a noon meeting Sept. 13 at the Vatican. Cardinal DiNardo, president of the U.S. Conference of Catholic Bishops, was joined in his meeting with the pope by: Cardinal Sean P. O’Malley of Boston, president of the Pontifical Commission for the Protection of Minors; Archbishop Jose H. Gomez of Los Angeles, vice president of the USCCB; and Msgr. J. Brian Bransfield, general secretary of the conference.

“The Holy Father is the important figure for us in this,” Cardinal DiNardo said. “He sees the problem all over the church and throughout the world.”

While the cardinal did not want to discuss the specifics of the private meeting beyond a statement released by the U.S. bishops, he did describe the encounter as “very, very fruitful.”

“It was lengthy, and we shared a lot of thoughts and ideas together,” the cardinal told Catholic News Service, “so I found the meeting very good from that point of view.”

“The pope is well informed,” the cardinal said, “and he’s also very, very attentive to what has happened to abuse victims in the church in the United States.”

It had been a whirlwind week for the cardinal. He arrived in Rome Sept. 12 following a meeting with the U.S. bishops’ Administrative Committee, which consists of conference officers, regional representatives, and the chairs of all the conference committees. Its task was to set the agenda for the November general assembly in Baltimore of all of the country’s bishops.

“I thought there was a good deal of unity of the bishops on where we need to go” and on the fact that “we have to move into action” in terms of addressing the abuse crisis, he said. The cardinal said the bishops must be “united in purpose on solutions.”

Cardinal DiNardo originally announced Aug. 16 that he was requesting a meeting with Pope Francis. The request followed the release of the Pennsylvania grand jury report on sexual abuse cases in six Pennsylvania dioceses and the announcement of credible allegations of child sexual abuse committed by Archbishop Theodore E. McCarrick, the former cardinal-archbishop of Washington.

In his statement Aug. 16, Cardinal DiNardo said the USCCB Executive Committee had established three goals: “an investigation into the questions surrounding Archbishop McCarrick; an opening of new and confidential channels for reporting complaints against bishops; and advocacy for more effective resolution of future complaints.”

When asked about the three priorities after the meeting with the pope, the cardinal said: “I think we can make movement on those things. I think we have to do it step by step.”

Since Aug. 1, Cardinal DiNardo has issued five statements responding to various aspects of the sexual abuse crisis and has called for greater transparency and accountability in the church, particularly on the part of the bishops.

When asked where he finds hope during the current wave of scandals and controversy, he said, “Our trust is in the Lord.”

“Even the pope today mentioned the cross, that you need to … be crucified with the Lord — that’s the only way you can deal with this, go through it. You have to listen to other people, and you hope that in that shared vision of mission, of cooperating together, you grow in hope.”