Two churches grow through closing and emerge as one

“When a parish closes it is the equivalent of experiencing a death.” That statement has been repeated many times over the past few 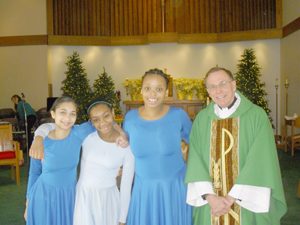 years as the Syracuse Diocese goes through the reconfiguration process. Parishioners who witness the closing of their home parish may actually go through Elisabeth Kubler-Ross’s five stages of grief: denial, anger, bargaining, depression, acceptance before they can emerge on the other side of their loss.

All Saints Church on Lancaster Avenue in Syracuse’s university neighborhood is the culmination of three church communities coming together: Our Lady of Solace, St. Therese and St. Andrew’s. The parish’s new “identity” officially began on the Feast of All Saints, Nov. 1, 2008. The Our Lady of Solace Church building was closed and  records and artifacts were carefully brought to the former St. Therese Church, which is the physical home of the new community. When neighboring St. Andrew’s officially closed some months later, many of its parishioners found a new home at All Saints.

A little more than a year later, the parish community of All Saints offers three weekend Masses, one with traditional music, one with contemporary post-Vatican II music and one with a Gospel Choir. Shakir Patterson grew up in Our Lady of Solace (OLS) Parish. He received his sacraments there and lives only a few blocks from the church. He wasn’t ready to see the Gospel Choir from OLS disband. “I really wanted to see that choir come over to All Saints. It was a staple of Solace and there is no other Gospel Choir out there right now so we’ve got to be the best,” Patterson said.

Patterson is a member of the Gospel Choir and the newly-formed parish council. Catholicism goes back four or five generations in his family. Patterson left Syracuse to attend college at Howard University in Washington, D.C. It was there that he found a parish community where approximately 80 percent of the parishioners were African American. He joined the Knights of Peter Claver, a 100 year-old Catholic lay service organization born in Mobile, Ala. when African American men were not accepted into the Knights of Columbus. The nearest chapter is a few states away, so Patterson often travels to Washington, D.C. to take part in the organization’s events. “I’d love to see one here but you need to have the members to support it,” Patterson said.

Patterson said All Saints is coming along well particularly because of the dedicated people who make up the community. He said there are people from OLS who have slowly made their way to All Saints. He credits Sister Frances Teresa Mirabito, CSJ, who spent decades active in the OLS community, including teaching at OLS School for years, for helping with the transition. The new All Saints Parish also includes Father  Andrew Szebenyi, SJ, who was a fixture at OLS as well.

Patterson said the church’s new pastor, Father Fred Daley, is the right priest to bring the people of the three communities together.
“The diocese found the priest who could relate to the people the most. I give kudos to the diocese for that decision,” Patterson said. “This all would have been impossible without Father Fred.”

Millie Williams brought the Gospel Choir together at OLS 21 years ago. She is glad to see it continue at All Saints. Although Williams definitely grieves the loss of OLS, she can see the Gospel Choir brings its lively spirit to the All Saints community. “The choir enhances the liturgy,” Williams said. “Here, there is spirit within the church and Father Fred’s leadership makes a big difference. It takes strong, positive leadership to get through something like this.”

Williams was director of religious education at OLS and was in charge when Patterson went through confirmation classes. “Millie was a huge asset at our church,” Patterson said. “She was a pillar. Her kids made all their sacraments at Solace. She was my confirmation teacher back when we did inner-city confirmation. It was awesome.”

Patterson said he knows of people in his neighborhood who helped build OLS by giving $35 a month back in the 1950s. “We’ve lost some of those people. It’s been easier for me because I’m younger,” he said. “What I want to do is to make sure that the spirit of Solace is at All Saints. I’m trying to make sure the presence of diversity, acceptance of all types of people and the presence of Solace is there.”

For John and Mary Jureller, the decision to join All Saints came after some careful discernment. John had been a parishioner of St. Andrew’s Church for 49 years. “We took a look at our options as to what parish to move to. We had attended St. Lucy’s for four years in the 1990s and we knew a number of people there so that was a consideration. We considered others and we considered no church at all, or a different Christian denomination,” John explained.

In the fall of 2008, the Jurellers met with Father Daley concerned because they wanted to find a parish home where some of the St. Andrew’s parishioners could stay together. They attended Mass at All Saints and were impressed by Father Daley’s preaching.

“The content of his preaching really resonated with us,” John said. “It was deeply spiritual and he is a dynamic preacher. We decided to give it a try and we found a number of things we liked, and we saw the possibilities. We saw the struggles of the people from Solace and those of St. Therese and we knew what they were going through.”

John is part of the new Parish Council and Mary is very active with All Saints’ adult faith formation. “There are a lot of good people interested in helping and trying to get involved in parish life,” John said.

Meg Ksander is in charge of parish life ministry for All Saints. She found St. Therese Church when she was a grad student at Syracuse University. She was a catechist, lector, extraordinary minister of the Eucharist and a member of the RCIA team. Ksander went through the Formation for Ministry program while at St. Therese and she was married there. She was commissioned in 2005, a time when St. Therese became linked with OLS. She served on the merger steering committee as the two parishes merged into one.

“As a former member of St. Therese Parish, I know that one of the general fears was that the warm, intimate sense of community would be lost. I am so grateful that that certainly has not been my experience,” Ksander said. “Among the remarkable aspects of All Saints is the seemingly paradoxical fact that, as a result of consciously making inclusiveness and the celebration of diversity a hallmark of our new parish, there has emerged a palpable sense of ‘connectedness’ and a unified identity throughout the parish community.”

Father Daley sees a positive, new energy in the people of his parish despite the sadness of the closing of the two parishes.

A committee was formed to see who was not coming to Mass from both parishes. They were invited to come to All Saints by telephone, letters and personal visits. “Even at this stage,” Father Daley said, “there are still people coming who have looked at other parishes or just needed some time.”

The new parish council at All Saints is deliberately made up of four people from the three former church communities and another group of four people new to the parish. Currently, one of the major parish goals is to find out how it can serve the greater east side community. The parish has connected with nearby Parkside Commons in the East Fayette neighborhood, an area where violence, poverty and drug use are prevalent.

The other two goals Father Daley explained are cre
ating the infrastructure of the parish so that small groups can develop by neighborhood or by interest for prayer, faith sharing and evangelization. The other goal is to see how the parish can become more connected with the young adults at Syracuse University and Le Moyne College.

“Now we’re able to look ahead as a community being faithful to our mission as we move into Lent and Easter,” Father Daley said. “There is the willingness of the people — despite their pain, disruption, anger and disagreements — a willingness to give the new parish a try and that is really important. Something new is blossoming from that process.”