Seton Catholic at All Saints 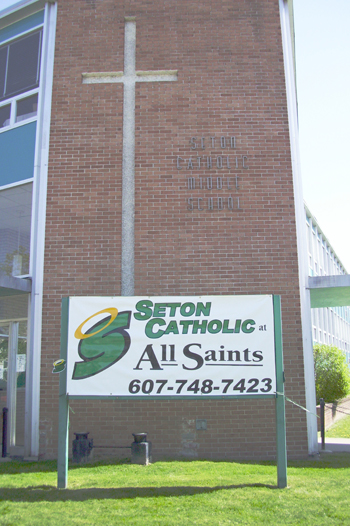 ENDICOTT — About 200 students gathered with parents and staff on Thursday, April 22, for the formal unveiling of a new name for the Catholic school for Western Broome County.

“I’m very glad to be down here with you today. I’m very excited that all of you are here,” said Chris Mominey, superintendent of Catholic schools for the Syracuse Diocese. “Thank you for being part of our Catholic schools. We’re here to plan for the future.”

Loud cheers broke out as a banner was unveiled over the current sign: “Seton Catholic at All Saints.” Students placed “Saint” logos on the banner with the help of the superintendent.

Originally built as Seton Catholic High School in the late 1950s, the building has been through several consolidations and name changes over the decades. Now with the merger of St. Joseph’s School into the Our Lady of Sorrows-Seton Campus, the building takes on a new name and mascot as of July 2010. The “Saint” of Seton Catholic Central High School in Binghamton is now a focus at what will be the only Catholic school in Western Broome County.

“What we’re trying to do is get the kids to make a connection to the high school,” said Mominey. ”Parents in this area of the diocese wanted us to make a more purposeful effort to tie our theme and our brand to the high school giving the kids an eye on that and on becoming a ‘Saint’ as early in their schooling as possible.”

A committee of parents from both schools created a list of five possible names. Ballots were then sent to parents of registered students for next year. The ballots were returned by Monday, April 19, but the name was kept secret until the unveiling.

“It’s the coming together of two communities,” said St. Joseph’s principal Angela Tierno. “We’ve jointly formed committees working on traditions — maintaining the traditions of St. Joseph’s School, incorporating them into our new school community and maintaining traditions of the school here, too. I think with the two communities working together, we can only grow and flourish, and do the work that Jesus would wish us to do with his youngest members.”

Tierno, who will become principal of Seton Catholic at All Saints, admits that closing the St. Joseph’s building will be difficult. She said many families have had generations attend the school. But she is also looking ahead to what they bring to a merged school. “As we move forward, hopefully we can only be better with the experience they bring,” she said.

About 200 students are expected to attend grades K-8 at Seton Catholic at All Saints. Additional younger children will also be part of the pre-school program.

A focus on the Catholic high school will likely be repeated with changes in Eastern Broome County catholic schools in the future. “Our plan is to have a school at St. John’s and St. James,” Mominey said, “I expect a similar process will be done there. Our hope is to tie each of those two elementary schools to Seton Catholic Central,” Mominey said.