Alumnus credits Catholic education on journey toward the priesthood 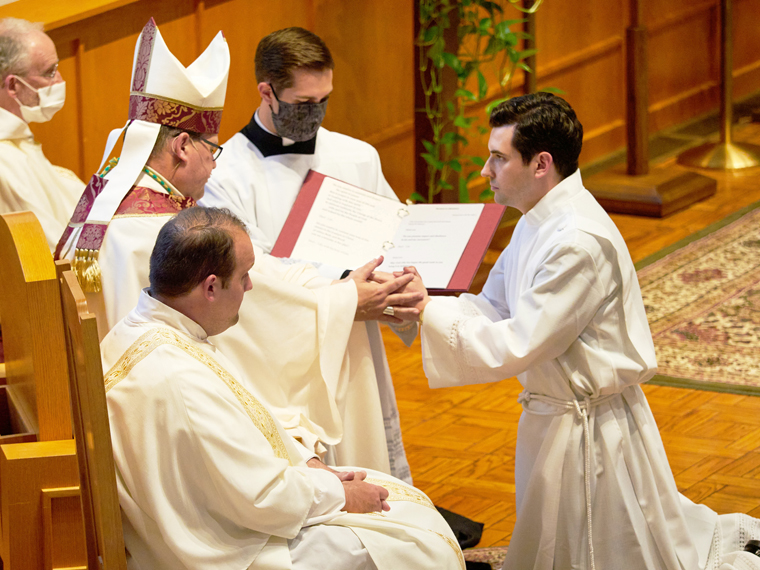 Editor’s note: This article was first published in the Winter 2021 issue of Pillars, a publication of the Catholic Schools Office of the Diocese of Syracuse. Visit https://www.syracusediocese.org/schools/pillars-magazine/ to read or download. 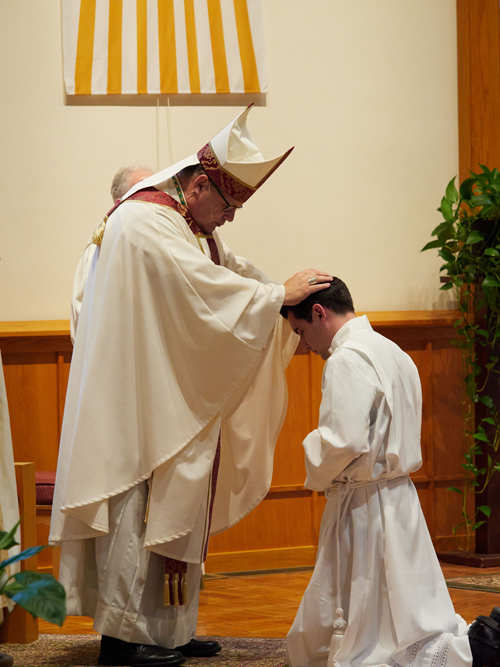 Bishop Douglas J. Lucia places his hands on Dennis Walker’s head and offers the Prayer of Ordination during Walker’s ordination to the transitional diaconate, celebrated June 19, 2020, at Our Lady of Hope Church in Syracuse. (Sun photos | Chuck Wainwright)

“We would do that right before the last period,” he said. “It was a beautiful prayer about the Blessed Mother. Some days you felt you were in a regular high school. But with that prayer, it was certain that we were at a Catholic school.”

The 2006 Bishop Ludden graduate was ordained a transitional deacon on June 19, 2020, one of three deacons Bishop Douglas J. Lucia ordained last year. Walker expects to be ordained a priest in June 2021.

He is one of six of the Syracuse Diocese’s 12 seminarians who attended diocesan Catholic schools.

Walker was among about 120 students who attended the junior-senior high school all six years.

“The biggest class I had was 20 people,” he said. “It helped you be more immersed in the learning.”

He played soccer and ran track — not terribly well. “They wanted everyone to play,” he said. “That’s kind of formative, being part of a team, building your interpersonal skills, and being part of an organization bigger than yourself.”

In soccer, “There wasn’t really a star on the team,” he said. “There were guys who were the best on the team, but we believed, ‘We’re a team and we all have strengths’ and we built on that.”

The school “had a home-town feel,” he said. “It was like you were part of the community. Not only did you know everyone, everyone knew you.”

Walker grew up in Syracuse’s Valley neighborhood, where his family belonged to Our Lady of

Hope (previously St. James). He attended Syracuse’s Danforth Magnet School from kindergarten through sixth grade before his parents decided to enroll him at Bishop Ludden. His younger sister, Diane, also graduated from Ludden.

“When we were younger, we didn’t have the money,” he recalled. “We went to an open house, and [my parents] were impressed with the education in general. They liked that there was care for students. The class size seemed like students had the attention they needed.” 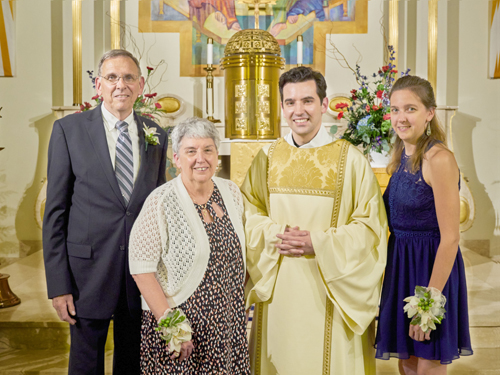 At Le Moyne College, he studied accounting and earned a bachelor’s degree in 2010 and an MBA in 2011.

He remembers Father Joe O’Connor, a 1995 Bishop Ludden graduate and later the director of the diocesan Office of Vocation Promotion, sharing his vocation story at the school.

“They were always encouraging us to think about the call, but it wasn’t anything I had put a lot of thought to,” Walker said.

“I see the importance of sending the young priests out there to anyone who is thinking about the priesthood,” he said. “They need to hear that it’s a possibility, and it can be a beautiful and fruitful life.”

His path turned toward the priesthood after college, when he learned about Theology on Tap, a young adult program. “I went there and met some people,” he said. “That gave me kind of a place where I had a shared faith with those my own age.”

Walker acknowledges his ordination will come amid numerous challenges for the church and society.

“I see this as a calling,” he said. “That’s made it easier to see that, despite all the challenges, I have a role I can fulfill as an ordained priest. I’m called to be a conduit to God.”

While that won’t always be easy, “You have to tell them what a beautiful life it is,” he said. “Despite all the difficulties, this is a good life. It’s a fun life. It’s one where every day is an adventure. Whatever vocation you are called to do, the Lord gives you the strength and grace to do it.”

Renée K. Gadoua is a freelance writer and editor and a frequent contributor to The Catholic Sun. Follow her on Twitter
@ReneeKGadoua.