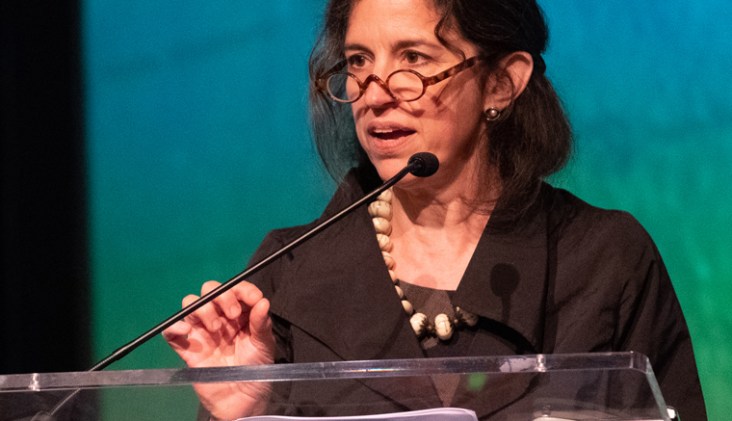 Helen Alvare, a law professor at George Mason University’s Antonin Scalia Law School in Arlington, Va., speaks July 12 at the Napa Institute conference in California. Alvare, one of America’s foremost Catholic feminist thinkers, said that despite the ongoing fallout from the sexual revolution seen in serial cohabitation and plummeting numbers of marriages, there are signs of hope for solidarity in U.S. society. CNS photo | Dan Rogers

NAPA, Calif. (CNS) — Americans continue to pursue “this ridiculous path” of “unlinking sex and marriage and kids, while calling what is actually falling apart ‘flying,'” said one of America’s foremost Catholic feminist thinkers.

“All the while (they’re) hurtling toward a collision with the ground,” said Helen Alvare, founder of the activist movement Women Speak for Themselves and a law professor at George Mason University’s Antonin Scalia Law School in Arlington, Virginia.

“Kids are hitting rock bottom with suicide and opioid use” as serial cohabitation and plummeting numbers of marriages signal the disintegration of a relational society, she said in a talk July 12 at the Napa Institute’s eighth annual conference in Northern California’s wine country.

But there are signs of hope in the “huge growth of hashtags, movements … straining toward solidarity,” Alvare said.

“There are opportunities for the church to narrow the gap between our current contemporary situation and the church’s gorgeous prescriptions for human love,” she said.

Movements such as Black Lives Matter, those that work for immigrant rights and #MeToo demonstrate we live in a “society that wants diversity and solidarity next to each other. I hope we can see these are a reflection of the radical need for solidarity, the need to love — a message we can endorse,” Alvare said.

“Where do we get the first message about solidarity and diversity? I don’t know — Genesis?” said Alvare, referring to the creation of man and woman in the first book of the Bible.

Effective Catholic communication needs to meet people where they are and it must discard “church talk,” arcane terms such as “procreative and unitive,” Alvare said in her keynote address at the July 11-15 Napa Institute conference.

“We have to give plainspoken answers,” for instance, about contraception, said Alvare.

“If you disassociate where God chose to put babies” from a committed marriage, “do you realize what that does to the relationship between you and the man — it severs tomorrow,” Alvare said.

“Contraception severs sex from tomorrow and that’s why we oppose it,” said the law professor. She noted that in reversing the Obama administration’s contraceptive mandate, the Trump administration lifted 30 paragraphs of her law journal article disproving the factual underpinnings of the mandate.

Alvare’s audience included German Cardinal Gerhard Ludwig Muller, who was prefect of the Congregation for the Doctrine of the Faith from 2012 to 2017; John Garvey, president of The Catholic University of America in Washington; and Bishop Steven J. Lopes of the Houston-based Personal Ordinariate of the Chair of St. Peter, the Catholic Church’s U.S. ordinariate for former Anglicans.

The Napa Institute was formed to help Catholic leaders face the challenges posed by a secular America, according to its website. Alvare’s talk was inspired by the day’s theme of the 50th anniversary of Blessed Paul VI’s 1968 encyclical, “Humanae Vitae.”

There are signs all around that people are concerned about the fallout from the sexual revolution, Alvare said. “The sexual revolution is not itself a reasoned revolution. The people who invented it did not invent it out of reason,” said the married mother of three children, now teenagers and young adults.

“Children are speaking up,” wearing T-shirts “My Daddy’s name is donor,” she noted. “Hook-up” books are a genre of teen literature that talk about how bad it feels, she said.

Both the left-leaning Brookings Institute and the conservative Heritage Foundation acknowledge the harms of family instability, she said. “Too many smart academics have pointed out that family structure … is actually the largest part of the social and economic gap between rich and poor, between white and black,” and even between men and women.

Autor found that especially black boys raised by a single mother in a poor neighborhood tend to fall behind their sisters by kindergarten and the achievement gap widens as they go through school, Alvare said, surmising “girls are looking at Mom and seeing Mom does it all.”

“Today we are seeing that Americans are not willing to adopt the claim that the sexual revolution was a complete hands down win,” Alvare said. “Nobody thought we would reach the possibility of a fifth justice with as much of the country on our side as we have,” Alvare said.

She was referring to the nomination of Judge Brett Kavanaugh, of the U.S. Court of Appeals for the District of Columbia Circuit, to replace U.S. Supreme Court Justice Anthony Kennedy, who is retiring.

To counter the falsehoods of the sexual revolution, “the winning argument is relationship,” Alvare said. To say: “You think that is the way to get there, but this is not going to get you there.” That is because, Alvare said, “ultimately our desire is for the love of an infinite God.”