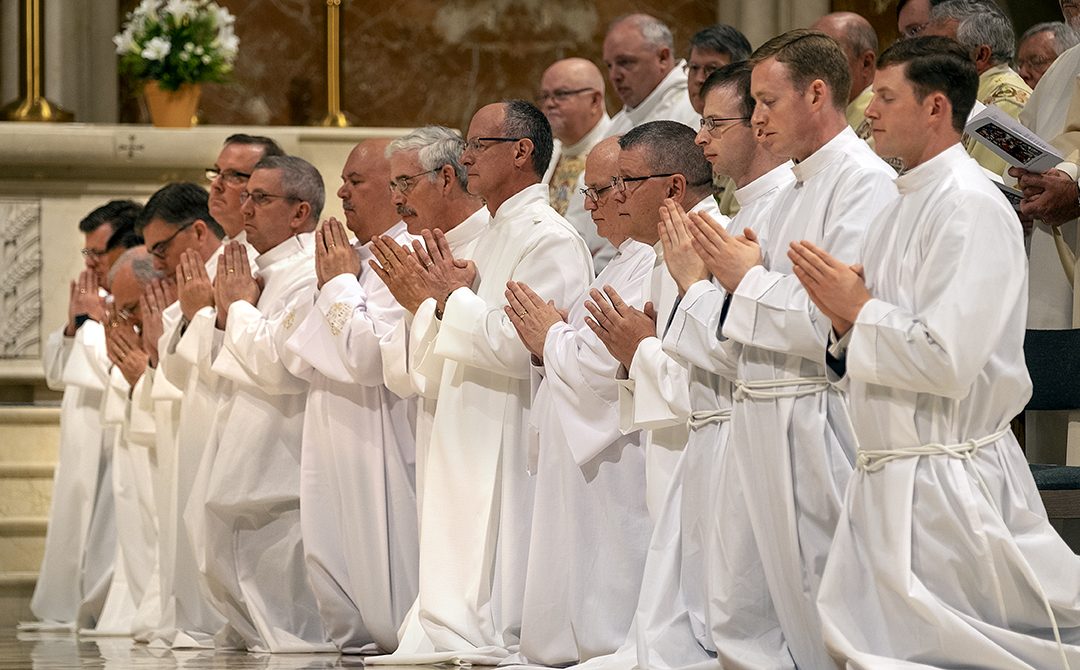 Fourteen men were ordained to the Order of Deacon in a unique celebration at the Cathedral of the Immaculate Conception May 19: Bishop Robert J. Cunningham ordained ten men as permanent deacons to serve in the Diocese of Syracuse; one man as a permanent deacon to serve in the Diocese of Tucson, Ariz.; and three men as transitional deacons for the congregation of the Legionaries of Christ.

“With great joy, we welcome you to the Cathedral of the Immaculate Conception as fourteen members of our Catholic family step forward and prepare for service as deacons,” Bishop Cunningham told the congregation of family, friends, and supporters filling every pew and then some.

The dual ordination was due to some providential timing: the formation programs of diocesan ordinand Terrence O’Loughlin and Legionary ordinand Brother Patrick O’Loughlin, Terrence’s son, just happened to sync.

Bishop Cunningham was joined at the Cathedral by Auxiliary Bishop Thomas J. Costello; Father David Daly, LC, a delegate from the Territorial Directorate of the Legionaries of Christ; dozens of deacons; nearly 70 diocesan and Legionary priests; and seminarians and deacon aspirants.

Proclaiming the first reading of the Mass was Sue Ellen Miller, wife of ordinand Anthony Miller; proclaiming the second was Silvia Castro, wife of ordinand Guillermo Castro. Deacon Richard Thornton, who studied with the diocesan ordinands and who was ordained a permanent deacon in the Maronite Catholic Church May 6, proclaimed the Gospel.

From the sanctuary, Father Lou Aiello, diocesan Director of Deacon Formation, called each ordinand by name. Each man rose from his seat alongside family and friends in the congregation and responded, “Present.” Confirmed as worthy of ordination, the ordinands were elected by the bishop and affirmed by the congregation’s hearty applause.

The fourteen ordinands sat in chairs arrayed before the bishop; directly behind them were ordained deacons, including members of the most recent class, ordained in 2016. Looking directly at those seated before him, Bishop Cunningham preached a homily of instruction and affirmation.

“Strengthened by the gift of the Holy Spirit, [the ordinands] will assist the bishop and his priests in the ministry of the word, of the altar, and of charity, showing themselves to be servants of all,” Bishop Cunningham said.

To assist the ordinands in their growth as servants, Bishop Cunningham offered two models. First, St. Stephen, deacon and martyr, who “boldly proclaimed the word and ultimately surrendered his life as Jesus did.”

“You cannot give to others what you do not have,” the bishop said. “You must love God’s word and cherish it before you can authentically proclaim it to others.”

The second example: St. Lawrence, from whom “we learn that the riches of the Church are the poor. He assisted the poor with great generosity. He is an example for permanent deacons who love the Lord…. We must love the poor in a preferential way, as did Jesus Christ; be united with them and work toward constructing a just, fraternal, and peaceful society.

In their preaching, the ordinands were advised to keep in mind two beloved saints: St. Francis of Assisi, who “suggested that we preach by the quality of our lives when he told us to ‘preach the Gospel and if necessary use words,’” and St. Teresa of Calcutta, who “told us that ‘one filled with joy preaches without preaching.’”

“Make their advice and their example your pattern of living,” Bishop Cunningham said.

He closed by reminding the ordinands that “I am not giving you simply a job or even a tenured position of great importance. Neither am I calling you to a position of employment, but rather to a partnership with Jesus Christ in the task of leading others to him. In choosing you, he has asked you to be his ambassadors. Moreover, in choosing to ‘send you out,’ he has not chosen you to live a life retired from the world, but to represent him in the world.”

The Rite of Ordination continued with each ordinand expressing to the bishop his willingness to be ordained a deacon and, with his folded hands inside the bishop’s, promising obedience to the bishop and his successors.

As those gathered prayed the Litany of Saints, the ordinands prostrated themselves in the sanctuary, signifying their submission to God’s will.

Finally, Bishop Cunningham placed his hands on the head of each candidate in silent prayer, signifying the special conferral of the Holy Spirit.

After being presented the Book of the Gospels by Bishop Cunningham, the newly ordained were welcomed to the ministry with handshakes and hugs from their brother deacons.
Following Communion, Barbara Grigson, wife of Deacon Tom Grigson, sang “Breastplate of St. Patrick.”

Deacon Tom Cuskey, associate director of Deacon Formation for the diocese (and president of the Catholic Sun’s board of directors), said new deacons “bring always a renewed sense of passion and purpose to what we do. The beautiful thing about the liturgy today, with other ordained deacons as part of it, is that we walk away with a sense of renewal as well. So the grace that falls to them flows out through all of us. I think it brings the Church to a better place, deacons and priests alike.”

Father Aiello beamed with joy at seeing the class ordained. “These are ordinary men, by the grace of God, doing extraordinary things,” he said.

In being ordained, Father Aiello said, the deacons “didn’t just receive a sacrament, they became a sacrament. So every person they encounter — they are the presence of the Lord in the charism of charity, as they look in those peoples’ eyes and ask the question, ‘What are your needs and how can I help you?’”

Father Aiello also noted that the new deacons will not only bring their considerable and diverse professional experience to the Church — the class includes men whose careers have included law, education, engineering, business, and the military — but also bring the Church to the world in their daily, “ordinary” lives.

“These men are on fire with the Lord,” he said. “You can just see it. I am both inspired and edified by them. They inspire my priesthood. They renew for me that sense of priestly grace by the lives they live and they edify me.”

Newly ordained Deacon Scott Harris declared the ordination a joyous and “beautiful day for the Church.”

He and his deacon classmates call one another “brother.” “We are brothers. We literally have been — and will be — from the very first time we met each other in class,” a bond that has only grown over their years of formation, he said.

Deacon Harris offered some simple but profound advice to any man who may be discerning a call to the diaconate: “Listen with your heart. That’s what I did.”