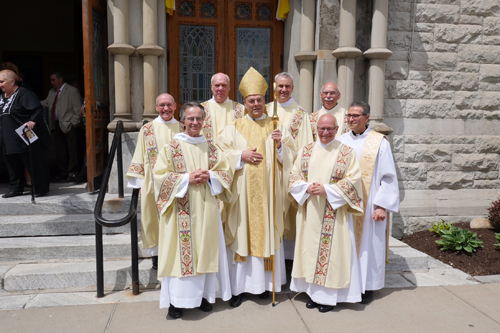 SYRACUSE — The six men were prostrate but very aware. They sensed the Holy Spirit coming upon them through the assistance of holy song.

In a ceremony during which a resonant choir drawn from several parishes sang the Litany of the Saints, the six men lay facedown in supplication in the sanctuary. Bishop Robert J. Cunningham ordained them as permanent deacons of the Diocese of Syracuse on Saturday, May 14, at the Cathedral of the Immaculate Conception.

Another man, Peter Hobaica, of New Hartford, had studied with this diaconate Class of 2016. Deacon Hobaica was ordained in his Maronite Catholic Church in Utica, St. Louis Gonzaga, on May 7. He was present for his classmates’ ordination at the Syracuse Cathedral.

Deacon Greg Cross, director of deacon personnel for the diocese, described the May 14 ordination as extremely moving and added: “You feel the presence of the Holy Spirit throughout the Cathedral.”

In the days leading up to the ordination, the classmates’ hearts raced and they went through many emotions. One of them said he actually was tingling on the steps of the Cathedral before the ceremony began.

“I think last night I felt a sense of anticipation,” said another of the new deacons, Nathan Gunn, of DeWitt (Holy Cross Church). “And today I feel a sense of fulfillment.”

A highlight of the ordination Mass for him occured when the six men were lying on the floor in front of Bishop Cunningham and listening to the Litany of the Saints. The cantor sang the names of the saints, and then the congregation sang the invocation: “Pray for us.”

That scene and that song, while he lay prostrate, is “a moment I’ll never forget,” Deacon Gunn said. “Incredible.” In addition to the love of the Holy Spirit and the love of Christ, he felt the love of the Church, too.

New Deacon John Addante, of Cazenovia (St. James Church), also mingled with family and friends after the Mass. “I feel that the Holy Spirit is working with me and through me,” Deacon Addante said, “and that he draws me to his will, and it’s not so much my day as it is God’s day. We live in God’s world.”

The other men who were ordained are Deacons Joseph Casper, of Baldwinsville (St. Mary’s Church); Michael Colabufo, of Syracuse (Blessed Sacrament Church); John Falge, of Marcellus (St. Francis Xavier); and Philip Slominski, of Liverpool (Franciscan Church of the Assumption, Syracuse).

There was much applause for this group. The center pews of the Cathedral were filled. People tilted their heads to get a better view, and many of them held cameras over the assemblage to take photos of the deacons in the center aisle.

As the Mass commenced, the smell of incense started to fill the Cathedral. The choir included cantors Tallon Larham and Nora Fleming, two trumpeters from Baldwinsville’s Baker High School, a guitarist, and singers from the new deacons’ parishes. Choir Director and organist Ryan Schaffer said the deacons themselves selected all of the music, including “Ave Maria” and “Here I Am, Lord,” which includes the line “I will hold your people in my heart.”

In his homily, Bishop Cunningham told the congregation that the Church selects the deacons, called by God, for the role of service, and their service is linked to that of Jesus Christ, the Son of God. These men will now offer sacrifices. There will be times when they are away from their families, times when they have to leave family functions early because they have services or other duties to perform.

In that work, the bishop said, these deacons are supported by loving wives, devoted children, and loyal friends. “The Church has discovered more and more the richness of the permanent diaconate,” he said.

Bishop Cunningham noted that the diaconate goes back to the time of the Apostles, when they “appointed seven men of good repute to assist them in their daily ministry, that they might devote themselves more fully to prayer and preaching of the Word.”

The bishop held out for the new deacons’ emulation two deacons from the early Church: St. Stephen and St. Lawrence. St. Stephen “boldly proclaimed the Word and ultimately surrendered his life, as Jesus did,” the bishop said. He added that St. Lawrence taught us that “the richest of the Church are the poor. He assisted the poor with great generosity.”

St. Lawrence, Bishop Cunningham said, “is an example for permanent deacons to love the Lord. We must love the poor in a preferential way, as did Jesus Christ. We see in Pope Francis the same concern for the poor, and those on the fringes of society, the forgotten.”

The candidates affirmed their obedience to the Church and to the bishop. They promised to commit themselves to the Church’s ministry, to perform works of humble charity, to keep the spirit of prayer, and to conform always to the example of Christ.

When Bishop Cunningham laid his hands on the men and said the prayer of consecration, the men became permanent deacons of the diocese.

The ordination ceremony concluded as the bishop presented each man with the Book of the Gospels and exchanged the sign of peace.

“Receive the Gospel of Christ,” he told them, “whose herald you have become. Believe what you read, teach what you believe, and practice what you teach.”

The concluding signs of peace filled the sanctuary with emotion. The sanctuary was lined with priests and deacons, and the new deacons’ brothers in the diaconate gave them big hugs and slapped them on the back. It was a sign of kinship, as well as a sign of peace. It went on for several minutes.

Bishop Cunningham wished the new deacons “many happy and fruitful and faithful years serving the needs of the people of our diocese.”

More applause filled the Cathedral as the bishop, the priests, and the deacons proceeded out of the Cathedral.

Deacon Hobaica and his wife, Judy, gave each other credit for his May 7 ordination in the Maronite Catholic Church. “I’m renewed again just seeing how these guys accepted the Spirit today,” Deacon Hobaica said. He said that a couple of the new deacons were weeping, and “one had to sing louder in order to calm himself down. It was beautiful. Beautiful ceremony today.”

Judy Hobaica said of her husband, “I’m very, very proud of him. And I’ve changed too. I have. You can’t help it. It’s really a joint effort.”

“I wouldn’t be standing here today in an alb and a stole if it weren’t for her,” Deacon Hobaica said. “There’s no question about it.”

Asked to give a highlight of the ordination, Deacon Addante said, “The Litany of Saints. When all of the saints were prayed to, that they would … help us in our ministry.”

Asked how he felt after the Mass, Deacon Slominski said, “Very full, and it’s overwhelming. … It’s breathless. That’s the best thing to say. Before now, I was drowning; now I’m floating.”

Father Louis Aiello, director of the permanent diaconate formation program for the Diocese of Syracuse, had confirmed to the bishop that these men had been found worthy of the diaconate. Taking in the scene outside the cathedral, Father Aiello was asked what he thought of the ceremony that had just taken place.

“The liturgy captures for us the joy and the hope of our present and future Church as we see in the faces of these men the desire to serve God and serve the Christian people of God,” Father Aiello said.

He recalled what Bishop Cunningham had said during the ordination Mass: that these deacons are called to represent Christ the servant, as seen many times in the Scriptures, as in the Last Supper, when he washed the feet of his disciples.

“We can’t be Christian unless we’re willing to serve each other,” Father Aiello said. “And these men represent that for us.”

That must be “the daily pattern and rhythm of your lives,” Bishop Cunningham had told the Class of 2016: going out into the world and serving people.

That concept is summarized in another entreaty from the bishop: “Cherish and love the Church as your mother.”