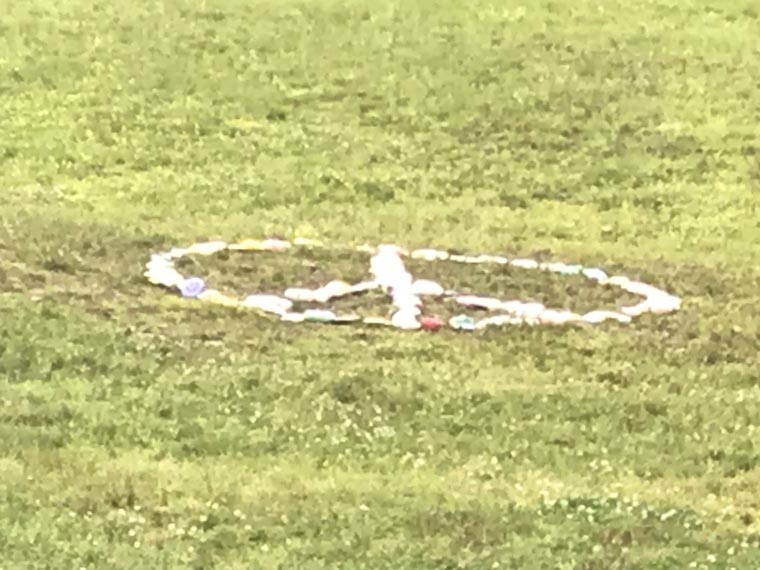 VESTAL — Our Lady of Sorrows’ annual Peace Camp featured a familiar symbol on the hillside overlooking the church parking lot. A peace sign was made up of 100 rocks hand-painted by participants at the camp in July.

The “Peace Rocks” theme was a play on words. It fits in with an effort to place painted rocks around Broome County to share “joy, love, and inspiration,” but it also describes teaching peace to young people from kindergarten to sixth grade.

It’s been 25 years since Terry and Jody Dempsey attended a presentation on teaching peace by Colman McCarthy that led to the camp idea. Father Donald VanAmburgh, then pastor at OLS, approved it, as has every pastor since.

A group of 27 teens, many of whom previously attended the Peace Camp, worked with 60 younger students for the one-week session.

“We direct and mold the teens because we feel if we teach the concept of peace to the teens, then they’ll teach the young people and everybody’s getting something out of it,” said Terry Dempsey.

There are a variety of activities like games, snacks, art, and music. They collected items for the parish food pantry. But the agenda also includes things like conflict resolution, problem-solving, and speed-peacemaking.

Dempsey said her own children, who are grown now, picked up peacemaking skills at the camp.

“One time my husband and I were having an argument and my son said ‘stop,’” she said. “We had to be honest to something we had said.”

In his child psychology practice, Dr. Jody Dempsey noticed that kids were struggling with violence, which gave them some ideas for the camp.

“We certainly thought it would make more sense to reach out to them in their formative years and talk about other ways to approach some of these things other than conflict,” he said.

“Conflict itself can actually be a teachable moment and if the kids know how to approach it, I think not only is [it] going to be better for them and the world, I think it’s a lot more fundamentally effective in how they interact and how they get along in different dimensions in their life.”

Terry Dempsey agrees that the world is a bit “scarier” than 25 years ago.

“I think that’s the reason that peace needs to be talked about more,” she said. “If we teach them the steps of peace when they’re not angry, they have a chance of possibly using one or two steps when they’re angry. We’re teaching: ‘What’s the problem? What are some solutions?”

“I think the families love to see how the kids have evolved in just four days,” she said. “It fits perfectly with Pope Francis’ mission: love one another, we’re not here to judge. We’re here to be Christ to others.”

Jody Dempsey adds that the message of peace can be abstract for young people but they learn at the camp: “It’s something they can live and breathe. So it becomes valuable to them. Because gosh knows violence gets a lot of attention. So we’re trying up the volume.”