Archaeologist finds his human side at the tomb of Christ 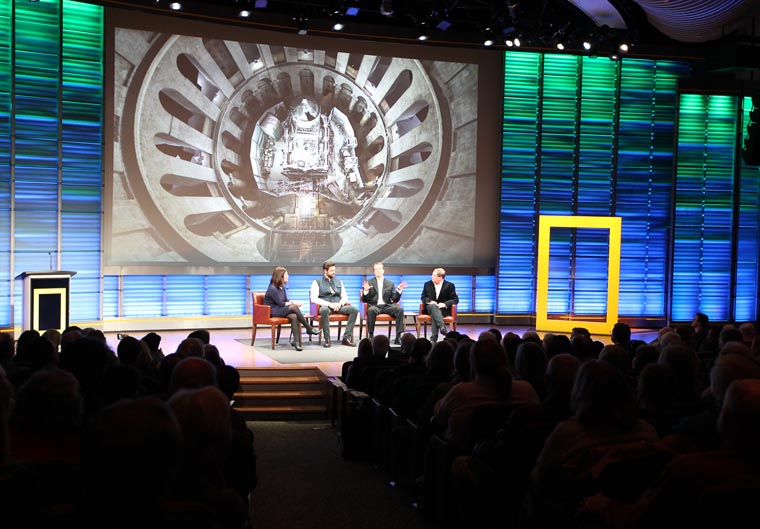 WASHINGTON (CNS) – Fred Hiebert’s identity is firmly grounded in academia and in his professional work as a scientist.

Over the years, he has studied and taught about ancient trade routes, such as the Silk Road, from China to Europe, and led underwater archaeology projects beneath the Black Sea.

The lively and friendly archaeologist-in-residence at Washington’s National Geographic Museum is not a stranger, by any means, to ancient treasures and places.

He speaks about communing “like this,” closing his eyes, with objects and in places thousands of years old. He gets excited talking about a 5,000-year-old piece of pottery or a 600-year-old brick, a piece at his office, which he excavated under water from a palace in central Asia.

“This was a sign of royalty to have that blue glaze,” he explained, holding the decorated brick that is in the shape of a slice of pizza. It’s part of the palace of Tamerlane, also known as Timur, a Turco-Mongol conqueror related to Genghis Khan.

“I’ve been to Machu Picchu, I’ve been to the tombs of the Mycenaean kings in Greece and it’s … you commune with the past. You sort of close your eyes” trying to imagine cultures and people who lived there long ago, he said about his job.

It was an easy feat until his last assignment, one he wasn’t expecting and which took him in 2016 and 2017 to the bustling city of Jerusalem and the place long believed to be the site where Christ was buried and where Christians believe that he returned to life.

“In this case, there’s no possible way to close your eyes and commune with the past because everybody’s pushing you,” he said of the experience of visiting the Edicule, the small shrine within the Church of the Holy Sepulcher in Jerusalem, which is the home of the tomb.

“I’ve never been in a place where a Greek Orthodox monk says, ‘You have 30 seconds to be here’” and then tells you to exit, he said. That’s the typical experience many pilgrims get when they arrive to venerate the tomb.

In addition to the quick visit, the tiny space within the shrine, where the tomb is located, snuggly holds three or four people at most. But that’s where Hiebert ended up in 2016 after he had worked with National Geographic on an exhibit about the ancient Greeks.

Officials from the Greek Orthodox Church, who’d heard about the “The Greeks — Agamemnon to Alexander the Great” exhibition that the National Geographic Museum in Washington had featured, called up museum officials to see whether they’d be interested in covering the restoration taking place at the site of the tomb of Christ.

“It’s a big story,” said Hiebert, who was one of those contacted about the project. “I thought, from my point of view, that’s interesting but I usually don’t normally work on projects that I don’t know anything about. I’d never been to Israel.”

But soon, Hiebert, described by some as the Indiana Jones of National Geographic, was on a plane from Washington to Jerusalem. That’s where he first encountered the elbow-to-elbow experience many go through when he lined up next to eager pilgrims near the Edicule, Latin for “little house,” which surrounds the tomb.

When he arrived, before the restoration, the shrine had scaffolding surrounding it. It was in danger of collapsing, which had led religious leaders to agree to the long-needed work to fortify the structure.

“They threw this iron frame around it. It was really ugly. It looked like a bird cage, like a jail,” said Hiebert.

Along with a media team from National Geographic, he ended up being present at different stages of the restoration work, but also for the experience of being in a small group allowed in the shrine surrounding the tomb when the church closed for 60 hours in October 2016. That’s when marble slabs were taken off the tomb, exposing the cave so the restoration team could put a moisture barrier around it.

“I’m not supposed to be like that,” Hiebert said in a Nov. 9 interview with Catholic News Service. “Earlier in the year, I was all by myself in (King) Tutankhamun’s tomb in the Valley of the Kings. My knees didn’t shake then.”

But the centuries-old tomb underneath the Edicule and the flurry of activity that surrounds it is unlike any other. In the Valley of the Kings, for example, people have long disappeared, a contrast to the emotions Hiebert saw from pilgrims venerating the tomb in Jerusalem.

Though the tomb has many lessons, for Hiebert, it showed him an important one about himself: that even a scientist may occasionally have emotions while at work.

“I’m an archaeologist, so I’m a scientist first, but it was just as important for me as a scientist to be following this, as it was as a human,” he said, which may be why his knees started shaking.

“There is a certain … something about the Church of Holy Sepulcher. It’s alive. It’s a living monument,” he said.