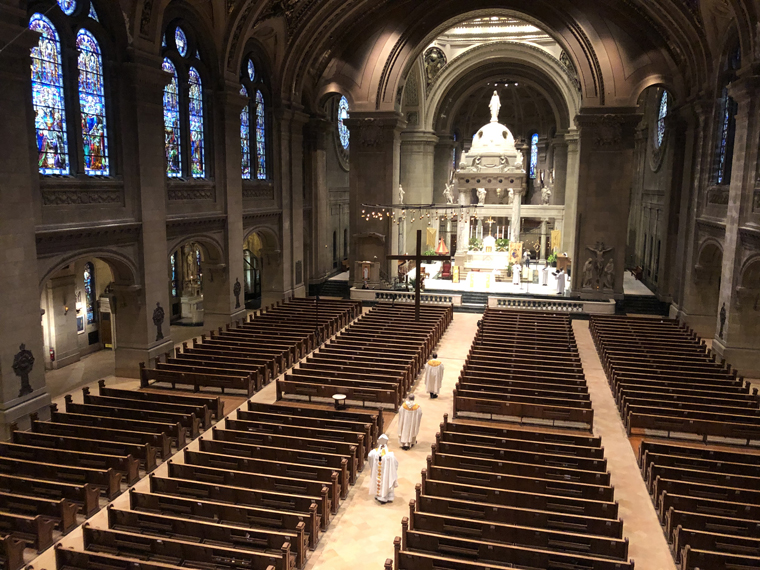 ST. PAUL, Minn. (CNS) — As parish director of St. Joseph in New Hope, Minnesota, Dean Rademacher watched collections decline after public Masses were suspended March 18 to help mitigate the spread of the coronavirus in the Archdiocese of St. Paul and Minneapolis.

Compared with budget projections and past giving patterns, collections were down at his parish about 12% in the first two weeks after the suspension. In the first two weeks of April, they dropped further, to a 28% decline. Hopefully, they are leveling off, Rademacher said, as public Masses remain suspended at least through May 4.

Because the parish has a solid electronic giving program among parishioners — about 30% of its weekly collection is online — it is faring better than some, said Rademacher, who also is chair of the Association of Parish Business Administrators in the archdiocese.

“If you didn’t have social media and online giving, if you were (simply) gathering on Sunday, that’s really hard,” he told The Catholic Spirit, newspaper of the Archdiocese of St. Paul and Minneapolis.

Not only are public Masses suspended and people lack that weekly touchpoint with their parish, people also have lost jobs or been furloughed, and some are cutting back on expenditures because they fear for the future.

Across the archdiocese, there is a wide range in the decline in weekly giving since the start of COVID-19.

“We have some parishes that have experienced significant declines on a year-over-year basis,” said Thomas Mertens, the archdiocese’s chief financial officer. “We are trending in the right direction and have seen improvement from earlier data due to the good work in the parishes.”

A decline in weekly collections has occurred across the country, said Nic Prenger, CEO of Prenger Solutions Group in Omaha, Nebraska, which helps parishes, dioceses and schools modernize their development programs. He speaks weekly to 30 dioceses and works directly with 100 parishes.

“Parishes that are struggling are the ones who hadn’t yet moved to online giving,” Prenger said. “If you’re a parish that relied on cash and checks, your offertory is probably down 50 to 80% each week.”

St. Joseph has taken steps to make up for its lost revenue, Rademacher said. Some among the staff of 35 employees are not working; their services are not immediately needed because of social-distancing restrictions, such as weekend child care, he said.

Several employees quietly stepped up and said they had the financial means to temporarily reduce their hours and their pay. That’s been the extent of staff changes thus far, but if parish giving or government loans do not fill the budget gap, more changes will be necessary, he said.

One source of help is the federal Coronavirus Aid, Relief and Economic Security Act, or CARES Act, which is providing COVID-related assistance to individuals and businesses.

Under that law, $349 billion was set aside for Small Business Administration loans, known as the Paycheck Protection Program, for businesses to meet two months of payroll. Loans can be partially forgiven if the money is used for staff salaries, interest on debt, utilities and other immediate needs.

There was some concern that parishes might face strings attached to the money that could threaten their independence as religious institutions, archdiocesan officials said. But Minnesota Catholic Conference staff believe that the risk of burdensome government mandates is low vis-a-vis the benefits of the program — if the loans are forgiven or paid off in a timely manner.

And while the program has run out of money, the Senate voted April 21 for a second measure, worth $484 billion, to increase funding for PPP. The House was to vote on it April 23.

Parishes and schools are strongly encouraged to continue applying, the archdiocese has counseled.

The parish is down just slightly in weekly collections, a testimony to the generosity among its 2,000 families, accounting for 7,000 parishioners, Ferry said. Several large gifts from parishioners with the financial means to help also have been important, he said.

About one-third of St. Michael’s weekly collection is through parishioners signing up for electronic giving, and just before Christmas the parish started an online giving option, which has helped, he said. Raising awareness among parishioners about online giving has increased collections in that avenue, he said.

Masses are being livestreamed, a capability the parish added a week before public Masses were suspended, and an effort that had been primarily geared toward the homebound and elderly, Ferry said. People are grateful for the online option for liturgies, which also includes streaming from the

parish’s perpetual adoration program, which has been moved from the chapel to the church to allow for social distancing, he said.

The parish is offering drive-thru confessions, and it drew a large group of parishioners to a special Palm Sunday event of giving out palms and providing an opportunity for people to donate to the parish.

While things are going pretty well at St. Michael, Masses remain suspended and nothing is being taken for granted, Ferry said, particularly as the state’s stay-at-home order continues through at least May 4 and people’s business and employment situations face changes.

“We’ve got some runway in front of us,” he said. “There’s no telling how this might tail off.”

Another potential source of assistance for parishes is the Catholic Community Foundation’s Minnesota Catholic Relief Fund, which is seeking donations to help hard-hit parishes in the archdiocese. Thus far, more than $990,000 has been raised and 17 parishes have been invited to apply for the first round of grants, said Anne Cullen Miller, foundation president.

A particularly important opportunity for giving to the fund opened up April 19 and runs through April 26, Miller said. An anonymous donor gave $200,000 in matching funds, so money raised up to $200,000 will be worth up to $400,000 in parish and school grants, she said. The foundation’s website is https://www.ccf-mn.org/relief.

St. Joseph’s Rademacher said his parish is working hard to keep parishioners connected. It reaches more than 1,500 members through Flocknote emails about parish events and opportunities. About 1,600 families, with 4,700 people, belong to St. Joseph.

Since suspension of public Masses, the parish is calling its older members, with help from people trained to assist vulnerable adults, to ask about their needs and offering to mail bulletins to their homes. In the past, 30 bulletins were mailed out. That number has grown to 69.

Rademacher said he doesn’t expect life to be the same after this pandemic. But it will still be good, he said.