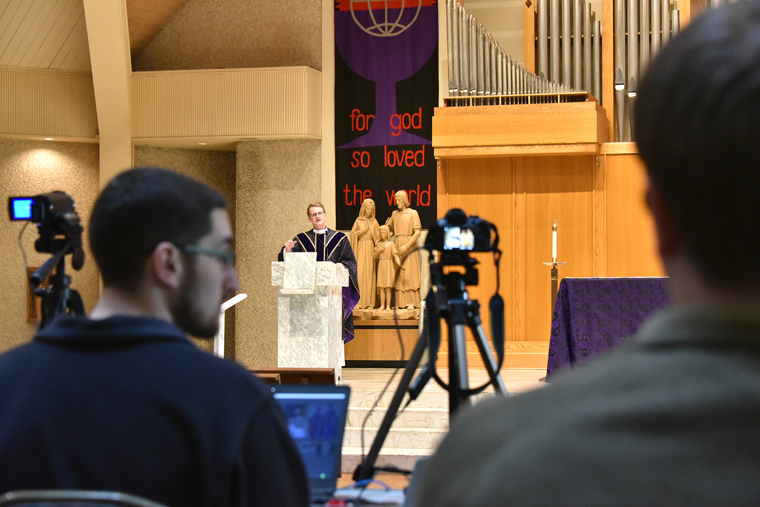 
GARY, Ind. (CNS) — In these extraordinary times of sheltering at home by order of civil authorities to prevent the spread of the coronavirus pandemic, pastors and parishioners in the Diocese of Gary are making use of photo and video gear to bring the Mass to anyone connected to the internet.

Masses and Catholic programming have long been broadcast on cable and satellite channels, but many believe that members of the diocese want to feel connected with their own parishes.

“Yes, there are some great Mass (broadcasts) on TV, but there’s such a personal touch when it’s Mass being broadcast right from your home parish,” said Matt Kresich, director of young Catholics at Holy Name of Jesus Parish in Cedar Lake, Indiana.

Kresich coordinates the livestream of the Saturday vigil Mass at 5 p.m. from Holy Name. Live viewership and a week’s worth of visits to the recording netted more than 650 views on their YouTube page, which is accessible through the parish website.

Holy Name’s pastor, Franciscan Father Michael Surufka, noticed a drop-off in attendance the week prior to the suspension of public liturgies in the Diocese of Gary March 17.

Jurincie, a video production hobbyist, coordinated the purchasing of audio-video accessories and recommended free software to manage multicamera livestreaming. He said he hopes lending his talent to the effort would promote calm and assuage the sense of

panic he feels is stoked by some media outlets.

“I want people to have that normal routine in their life of attending Mass,” Jurincie told the Northwest Indiana Catholic, Gary’s diocesan newspaper. “If there’s more normal stuff people have access to, then they’ll hopefully stay measured.”

Kresich also volunteers at the broadcast of the 11 a.m. Sunday Mass celebrated by Gary Bishop Robert J. McClory from Holy Angels Cathedral. Live viewership and visits to the recording have totaled more than 2,000 households in each week in a two-week period.

As of April 8, about 40 churches are offering livestreaming of Sunday or daily Masses.

The growing list of nearly two-thirds of diocesan churches that livestream a liturgy can be found by visiting https://www.dcgary.org/live-stream-sunday.html.

Local faithful have been comforted by how the church has taken to electronic media.

“I wish to thank all of the priests across the country who are livestreaming their Masses for us,” said Gary Wolfe, a St. Michael parishioner. “Not being able to attend Mass and receive the Eucharist has been very tough for people like myself and I’m sure for many other Catholics.”

Wolfe said his Schererville, Indiana, parish has had some “starts and stops” with livestreaming, but broadcasts of Mass are now running. “We are also using our Facebook page to share various reflections and prayers to help people through this challenging time.”

At St. John the Evangelist in St. John, Indiana, chief media specialist Bob Maletta said the large parish “is blessed to be ahead of the curve in broadcasting.”

Starting in 2015 using iPhones, Maletta has been filming inspirational messages and sermons. Now Masses are filmed using a three-camera set-up with software to switch cameras, record and broadcast.

“We call our media a ministry, and we have a prayer that our volunteers say before the Blessed Sacrament prior to Mass,” Maletta said.

At the genesis of a broadcasting effort is St. Edward of Lowell, Indiana, pastor Father Rick Holy. He’s heard from several individuals from other parishes, “who have been very helpful.”

Despite technical snafus related to Wi-Fi connectivity, Father Holy presses on hoping to initiate livestreaming for his parishioners because “St. Edward’s is their parish, their spiritual home. It’s a big part of their lives,” he said.

Seminarians Steven Caraher and Robert Ross, back in the region because seminary classes were canceled due to coronavirus concerns, coordinate livestreaming of a daily morning Mass and Sunday Mass at an empty St. Thomas More in Munster.

They recently worked with Jurincie to direct broadcasts, which include wide shots of the sanctuary and close-ups of the celebrant during his homily and the Liturgy of the Eucharist.

After “spending a Thursday setting up,” Caraher believes the impromptu telecommunications initiative is an essential ministry.
Some parishioners said seeing their pastor celebrating Mass from their familiar sanctuary was something that brought a family together.

“On Sunday, because Father Mike (Yadron) does the livestreaming, our two daughters who don’t live at home and are quarantined, watched Mass together and then we (connected) on Facebook after,” said St. Thomas More parishioner Antoinette Mercier. “You feel like you’re community.”

When the private, governmental, medical and spiritual efforts eventually ameliorate the COVID-19 pandemic, Father Holy said believers will sing the praises of being personally present at the breaking of the bread.

“Nothing can replace receiving the bread of heaven, the bread of Life, the body, blood, soul and divinity of Jesus in the Eucharist,” Father Holy said. “We can at least attempt to satisfy a part of that longing, fill a part of that void, until our people can once again return to holy Mass.”