As ordination approaches, Matt Rawson reflects on his journey to the priesthood 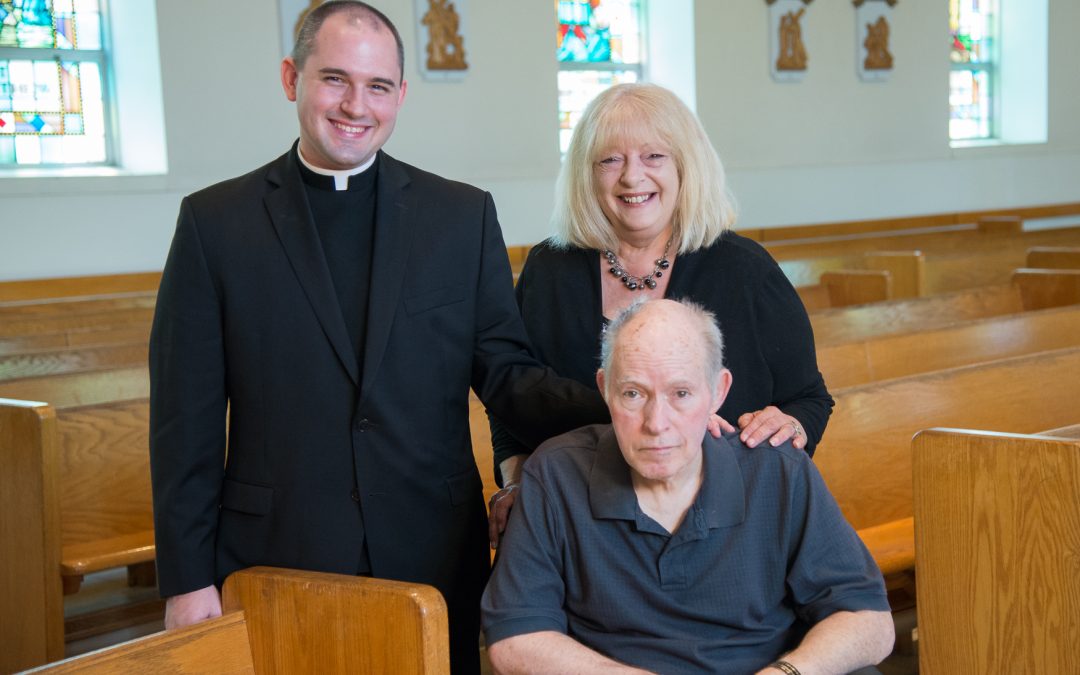 By Katherine Long | Editor
For a guy who’s never been able to stay still, Matt Rawson was the picture of peace and contentment last week as he reflected on his journey to the priesthood.
“I cannot sit still to save my life,” he laughed, settling into a pew at his home parish, Our Lady of Hope in Syracuse. “But that, I think, is what I’ll love about the priesthood: No two days are going to be the same.” There will be the central constants of Mass and confession, of course, but otherwise, “you never know what’s going to walk through the doors.”
Rawson, currently a transitional deacon, will be ordained to the priesthood this weekend at the Cathedral, the culmination of seven years of formation and a few more of discernment. He, along with his mother Donna and father Ralph, spent some time with the Catholic Sun and Syracuse Catholic Television to look back on his call and ahead to his ministry. 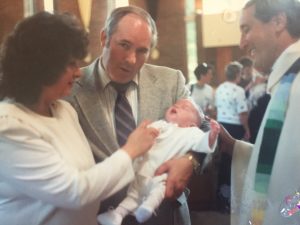 Born and raised in the Valley section of Syracuse, Matt recalls his childhood as a happy one filled with fun times and camping trips. Mom Donna concurs: “As soon as he woke up in the morning, there was always a smile on his face, ready to handle the day,” she said of her son. “It always helped me — it lit up the room, really.”
Rawson’s earliest days were a bit less sunny, however. “When Matt first joined us, he was actually born a preemie and given a 50/50… chance of living,” Donna said. “At that time we prayed, continued to pray, and throughout the years he’s grown into a wonderful young man.”
Matt always loved going to church, Donna remembered. In his “terrible twos,” “he would stand on the pew with his little bag of Cheerios,” she laughed. “But he would always be waiting and listening attentively to the homily” and to the music.
When Matt got a little older, he “started telling me he liked to listen to the homily because father was telling him a story,” Donna said. His love of the music led him to cantoring and joining the parish’s choir. 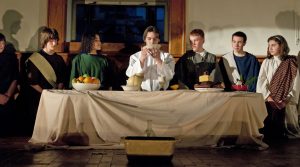 The Valley of Faith Youth Group presents Living Stations of the Cross at St. James Church in Syracuse in 2009. At the center of this scene from the Last Supper is Matt Rawson as Jesus. (Sun photo | Paul Finch)

Matt attended Corcoran High School, finding his niche in music and drama. In 2007, he joined the parish youth group, where many kids were able to share faith and fellowship together.
Of his high school years, Donna said Matt told her, “’I always had God on my side. God was always there with me.’”
And indeed he was: it was during his late high school years that Matt first felt a call to the priesthood.
After graduating from Corcoran in 2009, Matt went on to studies at Onondaga Community College. During his first year there, he joined a diocesan discernment group headed up by Director of Vocation Promotion Father Joe O’Connor. The group would meet for evening holy hours at local churches and join the pastor there for dinner.
“It gave us an opportunity to really ask questions about what the vocation was all about, what the priesthood was about, and where we wanted to go,” Matt said. He credits the group with solidifying his decision to enter the seminary.

Matt also credits his mom and dad for their support of his vocation. When he told them he was thinking about the priesthood, “they were very open, very supportive,” he said. 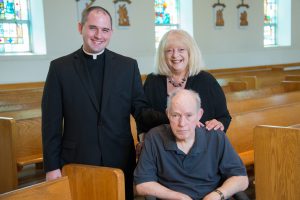 Deacon Matt Rawson, with his mother Donna and father Ralph, at their home parish, Our Lady of Hope in Syracuse. (Photo courtesy CTV | Rick Mossotti)

Donna said she was happy for her son, who she knew was never cut out for a desk job. “As long as he was going to be happy, we were both very supportive,” she said.
Matt was accepted for formation for the diocese, and went on to studies at St. John’s University in Queens and St. Mary’s Seminary and University in Baltimore. He spent a year in pastoral service at St. Joseph’s Church in Endicott.
The years of academic work were challenging, Matt said, but the opportunity to learn so much was a gift. So too was being part of a community with his fellow seminarians; he now counts friends up and down the East coast, he said.
Words fail him when he tries to sum up his feelings about reaching the end of formation and the beginning of his priestly ministry. “There’s no way to describe it,” he said.
“Being able to celebrate Mass is the number-one thing I’m looking forward to,” Matt said, along with celebrating all the Church’s sacraments.
“You meet people at beginning of life, at the end of life, and everywhere in between. What more could you ask for?”
Bishop Robert J. Cunningham will ordain Deacon Matt Rawson to the Order of the Priesthood on Saturday, June 2, at 10 a.m. at the Cathedral of the Immaculate Conception in Syracuse. All are welcome. The celebration will also be live-streamed via Syracuse Catholic Television.
Is God calling you or someone you know? Visit vocations-syracuse.org or contact Father Joe O’Connor in the Office of Vocation Promotion at joconnor@syrdio.org or (315) 470-1468.