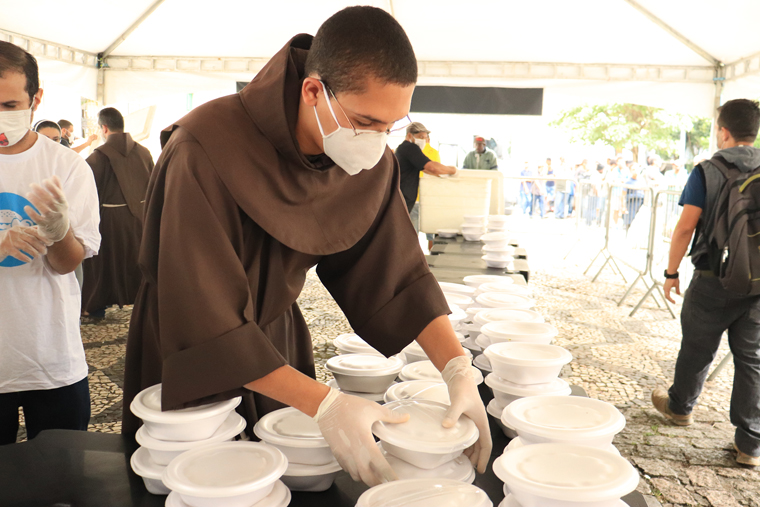 SAO PAULO (CNS) — In the early morning, even before ovens were turned on, people started to form the line. By the time the Franciscans brothers from Santo Antonio do Pari Parish were ready to distribute the food containers, there were thousands waiting for a meal.

Brother Santos, who heads the Franciscan Solidarity Service, has been distributing meals to the homeless in the center of Sao Paulo for more than 13 years. The traditional solidarity service, dubbed the Priest’s Tea, usually drew a few hundred homeless people, who congregated the St. Francis rectory. Now, said Brother Santos, the majority of people in line waiting for the Priest’s Tea are those who lost their jobs due to the COVID-19 pandemic.

“There has been an avalanche of people coming to the Priest’s Tea, not only the homeless. We had to put up a tent a few blocks down the street to try to reduce the mass of people,” he said.

Brother Santos said since March 24, when the city installed stay-at-home measures to combat the new coronavirus, the number of people seeking food more than quadrupled, forcing his team to set up another distribution center to feed the population: The Franciscan Tent.

The situation, however, has shown the brothers the immense solidarity found in Latin America’s largest city. The religious have received hundreds of donations from community groups and individuals.

“People call up and ask us what we need; there are those who just pull up in their cars and have a dozen prepared meals for us to distribute,” he said.

Brother Santos said other religious denominations also have been helping. “There are now Buddhists, evangelicals, Hare Krishnas, spiritualists and others bringing donations. There is a religious plurality involved in this undertaking that is very heartening to see,” he added.

Ten brothers deliver food to those in need. Local news media reported Franciscan religious were infected with COVID-19, but Brother Santos said those brothers are from another parish.

Since the beginning of the pandemic, the “entire brotherhood has sought to observe the hygiene and distance care described by the authorities.”

“We here all wear personal protective gear and follow health guidelines so as not to get sick,” Brother Santos said, adding that volunteer medical staff check the temperatures of people in line to see if someone has developed a fever.

“These people (in line for food) are mostly informal workers — street vendors, cleaning ladies, beauticians. The money they make today will pay for their meal tomorrow; with no money, there is no food. The reality of the matter is very cruel,” he said.

“We always assumed that not many people lived in the center of town, that it was only a place of business, not of residence. But now we are seeing hundreds of people who live around here and somehow survived under the radar with informal jobs,” he said. “Today, with everything closed and no money, they are seeking help.”

The fact that the new distribution center is called “The Franciscan Tent” is significant, said Brother Santos.

“Pope Francis says we need to be a ‘church which goes forth,’ and I think this tent is one of the best examples of this. We cannot sit and wait, we have to act. We have to be present where people are suffering,” he said.

“Only ‘The Franciscan Tent’ in the name of St. Francis could gather this diversity of people helping one another,” he said.