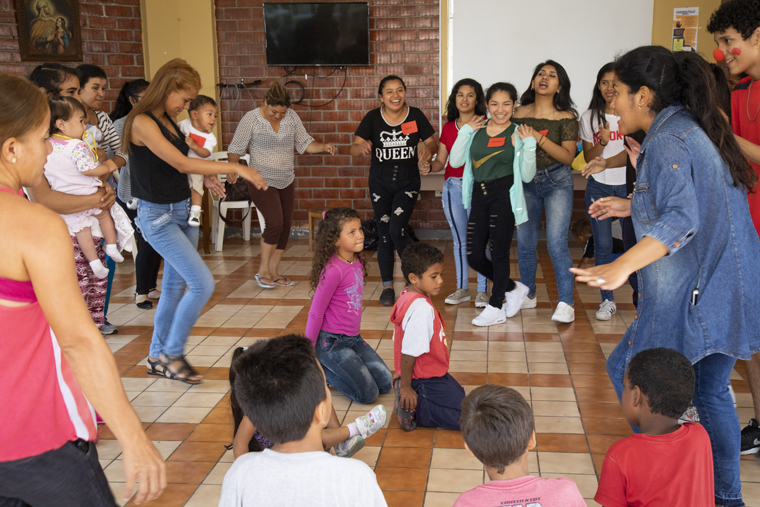 LIMA, Peru (CNS) — Elide Pena, 55, grins when she talks about her favorite Christmas memory: the time when she fell under Santa’s sleigh attempting to grab a toy for one of her grandchildren during a Christmas party in her native Venezuela.

For Pena, this year’s celebrations will be different. She is in Peru, looking for work far from her family. And instead of spending Christmas at home, she is staying at the Scalabrini welcome center, a home run by the Scalabrinians to help respond to the wave of Venezuelans arriving in Peru.

The shelter opened its doors Aug. 6 and has room for 80 people, who can stay for up to seven days. People in particularly vulnerable situations may stay longer. Most of its residents are Venezuelans, though there are also migrants from other countries.

With more than half a million Venezuelan migrants and refugees, Peru is the second-largest host country after Colombia. Hyperinflation, power outages, political instability, violence and shortages of food and medicine have driven about 3 million people out of Venezuela.

“Before, in Venezuela, I didn’t live in poverty and didn’t have big needs. I could go out and enjoy myself. I lived a normal middle-class life,” said Pena, who is from Margarita Island.

Three years ago, in her job as a nurse at a private psychiatric hospital, Pena started witnessing the shortage of medicines. The situation continued to worsen until last April, when the hospital closed. Without a job, and with her savings quickly dwindling due to hyperinflation, she decided to migrate.

After a monthlong journey, mostly on foot, Pena made it to Peru in late November. Along the way she slept on the street, suffered dehydration, and her feet developed blisters several times.

Her first days in Lima were challenging.

“Those first days were difficult. I couldn’t sleep at night because I felt disoriented,” Pena said.

“We leave our country with an idea, with expectations. But when we arrive the reality is very different. That causes a strong emotional impact, especially in the first days” said Jose Pineda, the shelter’s social worker, who is also from Venezuela.

“The home is prepared for this. We want to let (the migrants) know that there is a helping hand, and we want to show them what the first steps they have to take are. That is why this home is important,” he said.

During this holiday season, the Scalabrinians are also organizing activities to lift the residents’ spirits.

“This is an emotionally loaded month not only for Venezuelans but for all migrants — being without their families. Many are sad, because they cannot find a job and cannot send money to their relatives. We planned these activities to help them unite and feel at home,” Pineda says.

One such effort Dec. 16 involved a group of 45 young people from Scalabrinian-run Our Lady of Perpetual Help Parish. The young people came to the shelter to lead a daylong Christmas celebration. Other scheduled activities include a group visit to the zoo and a “chocolatada,” a hot chocolate party traditional during during the holiday season in Peru.

A special Christmas dinner menu will include Pan de Jamon — Venezuelan ham bread — and hallacas — a Venezuelan version of tamales. The dishes will be prepared by the residents themselves, just as they used to do back home.

The Scalabrinian shelter is just one of the many projects connected to the church to support migrants and refugees from Venezuela in Peru.

Some of the other initiatives are the United for Hope shelter run by the Comboni Missionaries, a Salesian shelter for youth and a comprehensive project of assistance and protection provided by the Jesuits. Countless parishes across the country also run local projects.

“My biggest hope is to give them a sense of community, so they can feel as if they are among family, as if they are in a little piece of Venezuela,” said Angel Risco, a Comboni lay missionary who is in charge of the United for Hope shelter.

“We want them to know that we are with them,” Risco added.

At the Scalabrinian shelter, Pena told CNS: “I feel loneliness and also sadness at being away from home. But I am thankful for the people who are here with me. They have become my family.

“I continue praying to God, and I know that the timing of God is perfect. I have faith that my country will recover and that better times will come,” she added.