Audience learns about Qur’an at Christ the King 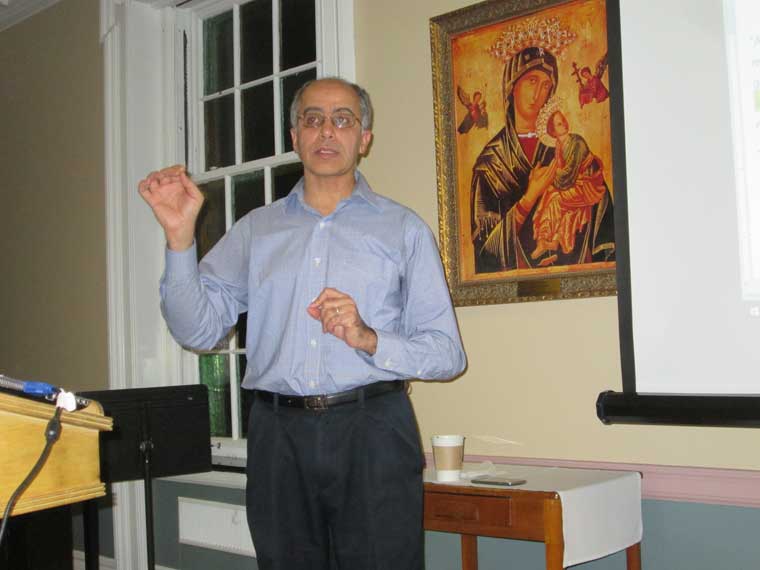 The weekly “Helping Christians Understand the Qur’an” sessions have been a popular fall offering at Christ the King Retreat House and Conference Center in Syracuse, says the center’s director.

“Everybody going out kept thanking me for having this,” the director, Father John F. Rose, said Oct. 19 after about 50 people had filed out of the chapel. It was the third of four consecutive Wednesday programs on the Qur’an.

Father Rose said popes and bishops favor a dialogue with people of the Islamic faith. He cited Pope Paul VI’s October 1965 “Declaration on the Relation of the Church to Non-Christian Religions.” In the first paragraph of the document, called Nostra Aetate (In Our Time), Pope Paul VI says, “In her task of promoting unity and love among men, indeed among nations, she [the Church] considers above all in this declaration what men have in common and what draws them to fellowship.”

Father Rose noted that more recently, Cardinal-designate Blase J. Cupich wrote an article in which he states the positive impact of dialogue with other religions.

There was plenty of dialoguing at the Oct. 19 session at Christ the King. Leading the discussion was Islamic Society of Central New York President Mohamad Khater. The session focused on the fact that the Qur’an recognizes both Jesus and Mary.

President Khater said that Muslims are called to treat others with the best of manners, and he himself presided in a gracious style. He invited audience members to read out loud Qur’anic lines that he projected onto a screen, entertained many questions, and created a cheerful mood with his quips. He and the audience developed a rapport.

“Who is going to read this time? … Can you see clearly?” he asked.

Audience member: “Yes, when you step back.”

“Oh,” President Khater said, and the chapel filled with laughter.

Throughout the hour and a half session, President Khater promoted a message of tolerance between Islam and Christianity.

He said that Muslims are ordered to believe in both the Old Testament and the New Testament. “If there is a difference,” he said, “leave it to God! That’s it!”

There are many more similarities than differences between Islam and Christianity, he told the audience.

The main difference, he said, is the fact that Muslims believe Jesus was a prophet, not the Son of God. Also, he said, Islam teaches that Christ was not crucified; that there is one God, not a Trinity of persons; and that there is no such thing as Original Sin.

But he added that Muslims hold Mary in “very high esteem.” In fact, he said, Chapter 19 of the Qur’an is devoted to Mary, and she is the only woman mentioned by name in the entire Qur’an.  “No other woman is mentioned,” he said, “not Muhammad’s wife, his daughter, his mother, none of them is mentioned in the Qur’an. Muhammad told us that Mary … is the best one in the hereafter. And … she is in the highest place in paradise.”

Another similarity between Islam and Christianity, President Khater said, is the belief that Jesus is not dead, and that he is going to come back. According to a Qur’anic verse, he said, God took Jesus’ soul and body whole. “He raised him up to him,” President Khater said.

“Every word in the Qur’an in Arabic is God’s word,” President Khater said. The Qur’an, he said, mentions rituals, civil laws, the Day of Judgment, paradise, and hell. Topics are mingled together, he said, and “one chapter can have all of these.”

In every page of the Qur’an, he said, “you have some kind of reference that you are all going to die and will come in front of God, so be mindful of what you do.”

The audience members expressed great interest in the similarities and differences between Islam and Christianity. President Khater noted that the angels are close to God. When the conversation turned to archangels, one audience member correctly noted that the Archangel Michael is mentioned in Revelations in the Bible.

Asked why she came to the session, audience member Pam Stewart, an Episcopalian from Skaneateles, said, “This rhetoric, this anti-Islam rhetoric — I have never felt right about it, but I didn’t have enough knowledge to be able to speak to it.”

She agreed that President Khater’s main point seemed to be promoting tolerance and understanding between the religions. “What he promoted here is what I hoped to hear,” she said.

Asked about other key things that she learned from the session, Steward said, “I didn’t really fully understand how much of the Old Testament and the New Testament are woven within the Qur’an.”

Another attendee was Jim Kerr-Whitt, a retired American Baptist pastor from Syracuse. He serves on the InterFaith Works Round Table of Faith Leaders.

“I just love to support the process of our faiths coming to a better understanding of each other,” he said.

He added: “I think it’s important for us to encourage people to have their own conversations with people of other faiths.”

Interviewed after the program, President Khater said that regarding the differences between Islam and Christianity, “we don’t have to fight each other about it. We can disagree on things; we can live together peacefully.”

He does not condemn someone for having a different opinion.

“We’re going to stand in front of God individually. He’s not going to ask me about my neighbor or anybody else. So I had better be good, myself, not worry about others.”