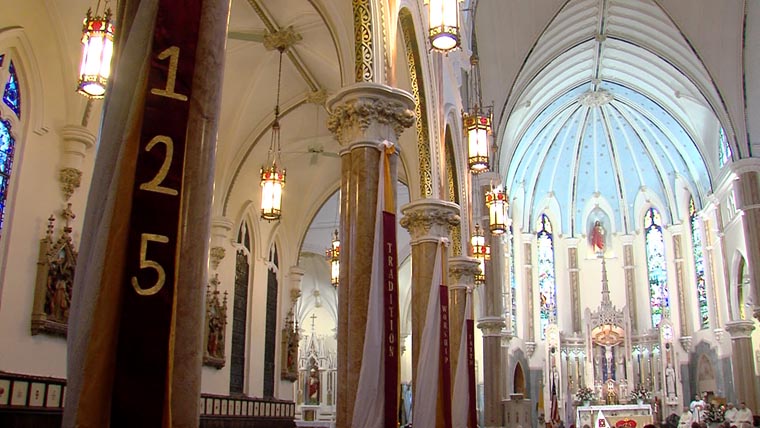 The variety of service projects suggests that the Basilica of the Sacred Heart of Jesus in Syracuse proceeds diligently through the decades. 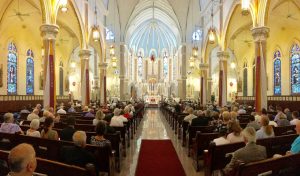 On Sunday, July 23, the big thing going on was the parish’s 125 Anniversary Mass of Thanksgiving, honored with a Papal Blessing and the display of the Papal Flag. Red-jacket-clad ushers greeted arrivals with “Happy anniversary.”

The 12-member 125th Anniversary Committee had already prepared the church more than a week in advance. The anniversary logo, created by Joseph and John Wagner, graced the sanctuary, and thin dark red banners displayed the motivational words behind all the work: Faith, Worship, and Tradition, written in English and Polish.

“I think a lot of why we’ve lasted is tradition,” said Thomas Marzynski, a parish lector, volunteer, and former trustee. “The orthodoxy: We’ve been blessed with pastors and assistants that have been very faithful to the magisterium.”

Throughout the Mass, the banner that says “Tradycja (Tradition)” fluttered slightly in the air conditioning, and there were other stirring Polish elements in the Mass as well: The main celebrant, Bishop Robert J. Cunningham, greeted the congregation in Polish, and an impressive number of people in the pews instantly responded with a Polish greeting back to him.

According to printed material from the basilica, “The founding of the parish [in 1892] indeed is closely linked with the pioneer settling of the Polish immigrant in the City of Syracuse and its vicinity.”

“The parishioners of the Basilica of the Sacred Heart today are very much aware of our humble beginning,” Carol Rojek, the 125th Anniversary Committee chairperson, said in an email. “Many of our grandparents and great-grandparents had little at the time, but gave so generously of their time, talents, and any extra income that they could spare to establish our church on the west side of Syracuse.

“Participating in service projects allows us an opportunity to pay it forward. Today, we recognize that we have all been blessed in so many ways. It is only fitting to honor the memory of our ancestors and share these blessings with those in our community that are facing hardships.”

Bishop Cunningham said in his homily that the organizer of the parish, Father Francis Kolaszewski, asked Bishop Patrick 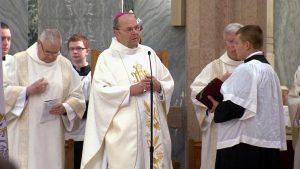 A. Ludden to form a Polish church even though there were only 124 Polish families. Bishop Ludden granted the request. The physical structure has gone through profound changes in 125 years. The new church was completed in 1910, in Gothic style with two spires. Many renovations came later, and the church was designated a basilica in 1999.

The basilica is more than stones and mortar, the marble altar, and the stained-glass windows, Bishop Cunningham told the hundreds of people who filled the pews. He said God is the “master builder,” and the parishioners are the “living stones.”

Those “living stones” certainly are constructive. One commentary at the Mass was read by Brianna Danboise. She noted that the parishioners are very generous in giving to causes such as Francis House, a home for the terminally ill; Joseph’s House, for women facing an unplanned pregnancy; the Brady Faith Center, which has many ministries; Weeks Elementary School and Frazer K-8 School; and Helping Hounds Dog Rescue. Danboise expressed the hope that parishioners will “continue to give, to share, and to serve for generations to come.”

Carloads of items were delivered to Francis House and Joseph’s House, said Mary Ann Zelinski, a parish trustee, bingo volunteer, and member of the 125th Anniversary Committee. Another charitable element is the parish’s food pantry, which Zelinski said has been in operation for more than 20 years.

Service includes responding to the rector’s requests. Father Baranski recalled: “We told them from the pulpit; I said, ‘This is your job for the 125th: Come up with a prayer.’ … We challenged them, and they responded.”

The result is the Basilica Anniversary Prayer, written by the Baker family. The prayer is printed on a laminated card (“Keep it handy as you offer your prayers,” Father Baranski said) and read at every Mass, along with the prayer for vocations and the prayer to St. Michael.

This is the Basilica Anniversary Prayer:

Most Sacred Heart of Jesus, we ask for Your blessing as our church celebrates its 125th Anniversary. Bless everyone for their generosity, support, and hard work. Let us remember our family members and friends who are no longer with us as they too helped make our church what it is today. We pray that our congregation and faith will continue to grow for generations to come. Please protect us and keep us safe. Amen.

Bishop Cunningham added a wish for heavenly protection, keeping with the Polish theme: He asked Our Lady of Czestochowa to “keep you in her loving embrace.”

The bishop offered a special word of gratitude to the Felician Sisters, “who have enriched this parish by their presence for decades.” The Felicians taught at Sacred Heart School, which closed in 2002.

But Sister Mary Melanie Jaworski, CSSF, still serves Sacred Heart. The director of faith formation and the parochial assistant, she is also a member of the 125th Anniversary Committee.

Of Polish heritage herself, Sister Melanie was asked what the founders would have thought about the flavor of the 125th Anniversary Mass.

“They would be proud that the Polish heritage continues to live on in this parish,” she said.

It was suggested that there apparently is something tenacious about the Polish identity.

She added in an email:

“I owe much to Sacred Heart. As I look back at my years of growing up in Sacred Heart Parish, receiving the sacraments and attending Sacred Heart Grammar School and graduating from the High School, I have many good and happy memories. I entered the Religious Community of the Felician Franciscan Sisters in Buffalo as a member of Sacred Heart parish in 1967, and returned to be the principal of the school in 1992, the year we celebrated the centennial of the parish.

“I’ve had the privilege of working with priests, religious, children, families, and many individuals along the way. Today, I am grateful and blessed to minister here and to be a part of the 125th anniversary celebration, as we remember in prayer and with gratitude, all who have gone before us, those we celebrate with today, and those still yet to be a part of Sacred Heart.”

‘Raised to do good’

Barbara Kowal, a lifelong Sacred Heart parishioner and a volunteer for bingo “and everything else” at the parish, said Bishop Cunningham’s sermon on Sunday was “right on.”

Kowal, who puts in 50 hours of volunteer service for the basilica each week, said the parish is now “universal” as far as ethnicities. She said the parish founders “would be very proud of us, because when they came here, they came for a new life, and that’s what they created.” Her own grandmother came from Poland and became an American. Her two uncles were trustees of the parish, her aunt was secretary of the Rosary Society for 35 years, and her mother’s two sisters were Felician nuns.

“We were raised to do good for the church,” Kowal said.

The spiritual aspect of the parish is healthy, Father Baranski said. Sacred Heart offers Masses in English, Polish, and Latin on Sundays. Father Baranski also noted special services, such as the annual Rosary Rally, monthly adoration of the Blessed Sacrament for the children, and the annual outdoor Corpus Christi procession.

As for the annual festival, it is skipping a year because of all the special celebrations at the basilica this summer.

When the festival returns next summer, it will offer its customary Polish food and “fun dancing.”

Do they still do the polka?