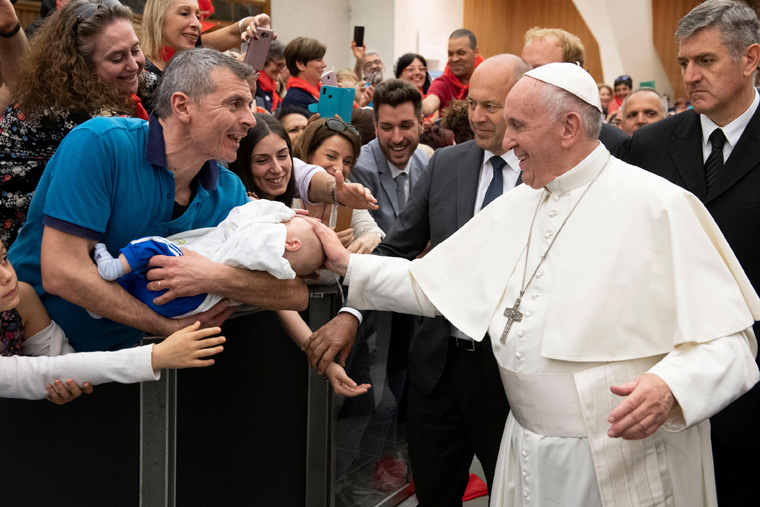 VATICAN CITY (CNS) — Service, charity and love must be the hallmarks of the charismatic renewal movement, Pope Francis said.

Addressing participants at a gathering of the Catholic Charismatic Renewal International Service, also known as “Charis,” the pope said June 8 that through their “baptism in the Holy Spirit, unity in the body of Christ and service to the poor,” the movement’s members can bear witness to God’s love and evangelize the world.

However, without love, establishing evangelization offices or implementing carefully planned programs “is useless,” he added.

Unfortunately, he said, when outsiders look at some church communities, they say, “See how they gossip about one another!” Pope Francis said. “This does not come from the Holy Spirit.”

The Vatican announced last year that “Charis” would take over the roles previously played by the International Catholic Charismatic Renewal Service and the Catholic Fraternity of Charismatic Covenant Communities and Fellowships. The two previous organizations ceased to exist June 9, Pentecost Sunday.

The pope praised both former organizations for “the mission they have carried out in the past 30 years” and said the creation of a single entity is a new stage “marked by communion between all the members of the charismatic family in which the mighty presence of the Holy Spirit is manifested for the good of the entire church.”

The presence of the Holy Spirit “makes each one equal, since each has been born of the same Spirit: great and small, old and young, engaged on the worldwide or local levels, all form a whole that is always greater than the part,” he said.

Acknowledging the uncertainty that always comes with changes and the temptation to “leave things as they are,” the pope said that the changes in the organizational structure, which are characterized by service and “not governance,” comes from God who “makes all things new.”

Pope Francis also encouraged members of the charismatic renewal movement to be witnesses of God’s love and not center their evangelical efforts on “ideology or methodology,” which come from the “spirit of this world, not the spirit of God.”

“It can happen that in any human organization, secular or religious, there is a temptation to keep looking for personal gain and the ambition to stand out, to lead, to make money. That never changes. Corruption enters that way,” the pope said. “Service is not about filling our pockets — the devil enters through the pockets. Service is about the giving of oneself.”