Beatification will see ‘Jesus planting his cross’ in heart of Detroit 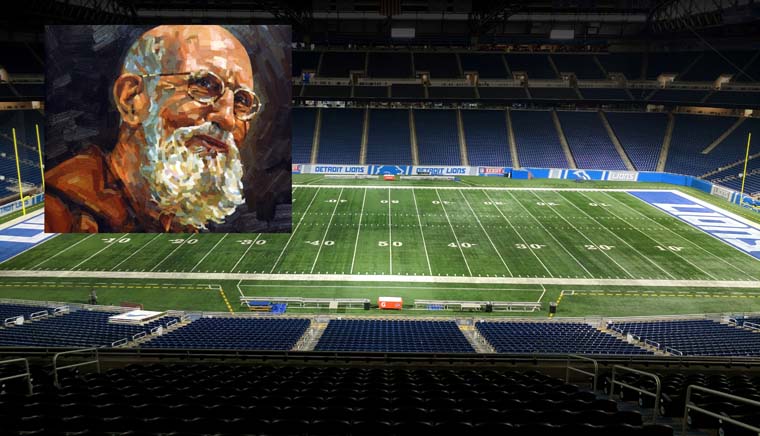 DETROIT (CNS) — On Nov. 18, more than a few Hail Marys will be thrown around inside Ford Field. And unlike a football game, every single prayer will be answered.

That day jerseys and helmets will be replaced by chasubles and miters as thousands of bishops, clergy and faithful from across the country prepare to celebrate the beatification of Capuchin Franciscan Father Solanus Casey at the home of the NFL’s Detroit Lions, the largest venue Detroit could find.

There won’t be pyrotechnics or huge inflatable lions when the opening procession begins through the stadium’s giant tunnel, but it should be a surreal sight nonetheless.

“The image for me, when we think about what the Mass is, becomes Jesus planting his cross — his massive cross — in the center of Ford Field,” said Father Robert Spezia, one of several priests helping coordinate the massive liturgy. “Picture this massive crucifix that he died on coming down and being planted on the 50-yard line; that’s what’s going to happen on Nov. 18.”

Besides the challenge of organizing Communion for 66,000 people, the liturgy of beatification will be new for almost everyone, said Capuchin Franciscan Father Larry Webber, vice postulator for Father Solanus’ sainthood cause and a lead coordinator for the Mass.

“We’re coordinating with the Congregation for the Causes of Saints and with our postulator in Rome for all of the readings,” Father Webber told The Michigan Catholic, newspaper of the Detroit Archdiocese. “The first model of the booklet we’re using is from a blessed in Switzerland, which was a multilingual celebration. But we have been in touch with all of the celebrations that have happened here in the United States, including Newark and Washington, D.C.”

The beatification rite itself is only a small portion of the Mass, inserted between the penitential rite and the first reading — but an important one.

“In a kind of medieval gesture, after he reads it, the cardinal will stand and hold the decree up so everyone can see it,” Father Webber said. “This is to show and prove that this is from the Holy Father. Then there’s the unveiling of the image of Father Solanus, applause and music and a procession with the relics.”

The relics of Father Solanus, which were collected from his tomb in July, will be carried by those who have received favors through the holy Capuchin’s intercession, including the Panamanian woman whose healing from a skin disease in 2012 was the official miracle recognized to move Father Solanus’ cause forward.

They will present the relics to Cardinal Amato and Archbishop Vigneron to be placed near a simple, wooden shrine.

Father Spezia said the altar, processional cross and some of the Communion vessels will be the same ones used during the 1987 Pontiac Silverdome Mass celebrated by St. John Paul II.

Father Spezia said it’s a “great honor” to be asked to help coordinate such a special liturgy — even if he isn’t quite sure how to tackle the monumental task of getting Communion distributed to so many people in a timely manner. Still, considering the subject, he’s confident things will work out.

“I’ve always found with these kinds of things that heaven really helps us. We’re not doing this alone,” said Father Spezia, director for clergy and consecrated life for the Archdiocese of Detroit and one of dozens of clergy and laity helping organize the massive Mass.

Between the time the doors open at 2 p.m. and the start of Mass at 4, it’s possible there will be testimonials played on the stadium’s “big screen,” but the fanfare will be understated — befitting a humble Capuchin’s spirituality.

The readings and musical selections will be proclaimed in a variety of languages — including English, Spanish, Vietnamese, Aramaic and Tagalog (the language of the Filipino people) — a reflection of the diversity of the church and those Father Solanus served.

Capuchin Franciscan Father Ed Foley, professor of liturgy, music and spirituality for the Catholic Theological Union in Chicago, who will direct the nearly 300 singers and 25 orchestra members for the Mass, said coordinators want the liturgy to mirror the simple, accessible spirit of Father Solanus.

“There’s going to be 66,000 people and the pope’s representative, so you can’t be too low-key, but on the other hand we wanted it to be accessible to the ordinary folks who have showed up year after year to be with Solanus,” Father Foley said.

For Father Spezia and other coordinators, the beatification is a reminder that, as Archbishop Vigneron has said, “God loves Detroit,” and everyone is called to a higher purpose.

“We’re celebrating the fact that God has told us by means of working a miracle through the intercession of Father Solanus that Father Solanus is in heaven with him. That’s what we’re celebrating,” Father Spezia said. “I think it’s important that we realize that this is the call for all of us.”