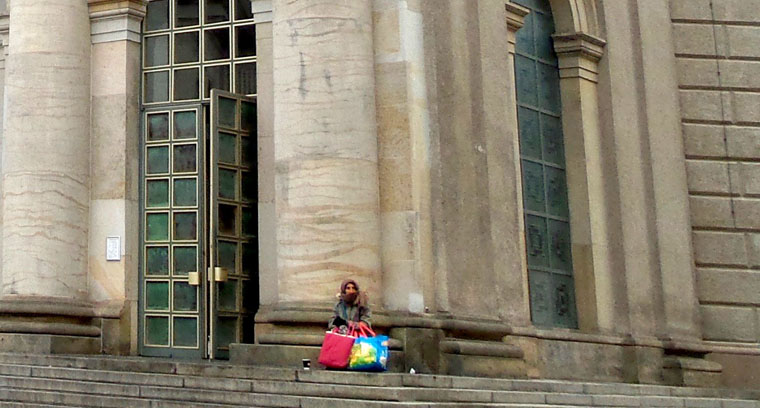 By Zita Ballinger Fletcher | Catholic News Service
The Archdiocese of Berlin took Pope Francis’s call to participate in World Day of the Poor to a new level by hosting a festive banquet for the city’s poor in St. Hedwig’s Cathedral.

In honor of World Day of the Poor, Archbishop Heiner Koch opened the doors of the cathedral on Sunday at noon to an estimated 300 guests and 140 helpers from local parishes, including needy, ill, elderly and homeless people.

“This is about giving them a small, true experience of being welcome as human beings,” Archbishop Koch said in an interview with RBB German broadcasting. “We tried to decorate the tables well, to make the food a bit festive, to welcome the people warmly and personally say goodbye, and to sing with them and speak to them. The value of the human being is the most important thing in this hour.”

Guests were treated to a free three-course meal, including pumpkin-ginger soup, potato vegetable casserole, stuffed baked chicken and apple strudel. They dined at tables set with candles, glasses, and elegantly folded napkins. They also were presented with roses.

The archdiocese’s gesture has made headlines across Germany due to its poignant significance. Homelessness in Berlin is increasing, according to an October report by the Berliner Zeitung newspaper. The city is filled with an estimated 8,000 homeless and an additional 50,000 transients with no fixed place of residence. Many of those living in poverty are from Eastern Europe.

“Because I am in a nursing home, I came out here, and I am happy that I am invited to be here,” Gisela Partenheimer, an elderly citizen attending the banquet, told RBB.

The archdiocese invited guests by making phone calls to local parishes and spiritual community centers with instructions to reach out to people and tell them to bring friends. Archbishop Koch personally greeted guests at the door.

“It is really something special to come here. That someone like me who just got released could come here,” Grimm said in an interview with RBB at the event. “With an invitation — that’s something that makes you the most happy.”