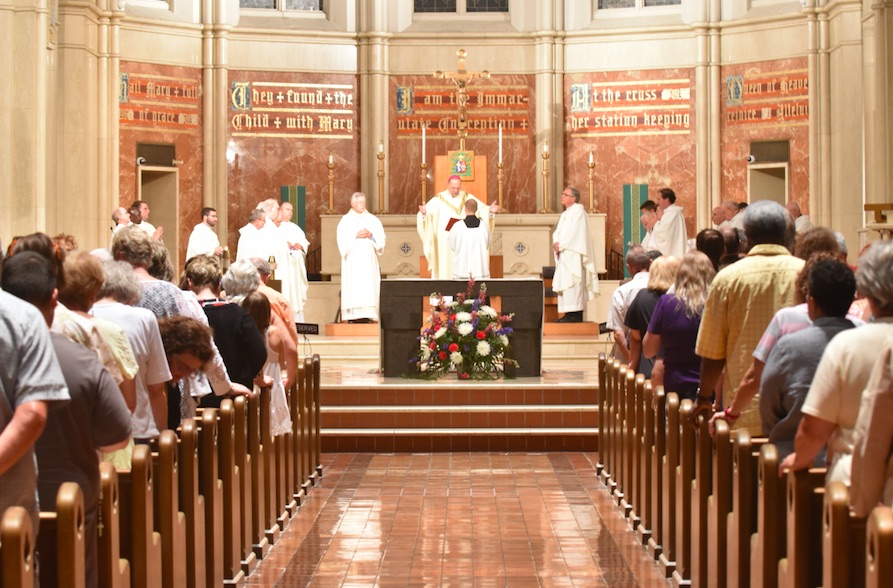 SYRACUSE — At a Mass to promote harmony celebrated at the Cathedral of the Immaculate Conception July 13, Bishop Robert J. Cunningham affirmed the dignity of every person and called for life to be respected, reverenced, and protected.

“In the midst of these trying days, we must be clear about the dignity of every human person. Whether black, white, straight, gay, lesbian, transgender, police officer, ordinary citizen, an immigrant, Jewish, Christian, Muslim, each and every person is created by a loving God in his image and likeness, precious in his sight. Human life is a beautiful gift that must be respected, reverenced, and protected,” he said during his homily.

In response to “the devastating acts of violence in Orlando, St. Paul, Baton Rouge, Dallas, and in our own communities,” Bishop Cunningham issued an invitation July 8 for all members of the community to join him for the special Mass.

As Mass began July 13, Bishop Cunningham welcomed all those who filled the pews, including clergy, religious, lay people, people of various faiths, and community leaders, noting specially Syracuse Mayor Stephanie Miner, Syracuse Chief of Police Frank Fowler, Rebecca Fuentes and members of the Workers’ Center of Central New York, members of the Islamic Society of Central New York, and “our readers and gift bearers who are deeply involved in our community.” He also thanked Beth Broadway and InterFaith Works and Mark Cass of the Alliance of Communities Transforming Syracuse for their assistance in promoting the Mass.

“We live in an imperfect and troubled world where the exercise of human freedom often thwarts the dignity of the human person,” Bishop Cunningham told the congregation as he began his homily. “We gather this evening because each of us has a part in bringing peace and harmony to our country, our community, and our family and friends. As the words of the hymn remind us: ‘Let there be peace on earth and let it begin with me.’”

Events of the past few weeks, internationally, nationally, and in our own community, cause us to pray for peace and harmony, he said.

“In Orlando, the tragic death of so many young people gathered at the Pulse nightclub, police shootings in Louisiana and Minnesota, the retaliatory action of a sniper in Dallas killing and wounding police officers and civilians, and just the other day, the killings in the courthouse in Michigan, are vivid reminders of the magnitude that violence has reached in our country,” Bishop Cunningham said.

“In our own area, close to our homes, lives are harmed or lost when people seek to support their drug addiction, or in response to a misguided search for justice, or in retaliation for abuse and domestic violence,” he continued. “Assaults on the human person abound. The precious gift of human life is too often threatened and disregarded. Our hearts are heavy and our tears are many as we try to understand this senseless loss of life.”

Bishop Cunningham drew on the words of St. Paul, who called on the faithful to “bear with one another; forgive whatever grievances you have against one another. Forgive as the Lord has forgiven you,” and on Catholic Worker co-founder Dorothy Day, who “concluded that love alone can bring about the conversion of hearts needed to change the world,” he said. Quoting Pope Francis, Bishop Cunningham underlined, “Violence cannot be overcome with violence. Violence is overcome with peace.”

Bishop Cunningham also noted the good being done, saying violence in the headlines and on the news “should not blind us to the many ways in which people reach out to others, the varied ways in which people treat others with care and concern, the numerous efforts made by our law enforcement officers and by so many others to provide the corporal and spiritual needs of our brothers and sisters.”

Bishop Cunningham urged those gathered to pray that the dignity of every life be recognized and for the end to violence and conflict, and to treat all they encounter with respect and reverence.

“In the days and weeks ahead, let us ask Mary to help us respond to violence and conflict with the power of dialogue, reconciliation, and love,” he said, drawing on the words of Pope Francis.

Chief Fowler noted before the liturgy began that he had been invited, “but I think this is, personally, a great idea.”

“In order for us to get through these troubled times that we’re now facing, we have to do it together,” he said.

“I personally think that one of the reasons why our society is in such a place that it is now is that we are so  quick to exclude the church from all that we do,” he added. “I personally think that that’s the wrong step and until we get that part right we’re still going to be faced with challenges that we otherwise would be able to avoid if we included the church and followed the teachings of God.”

Dallas resident Caroline Johnson had just returned to Syracuse from a year of service in Costa Rica with FrancisCorps when she heard about the Mass, she explained. “For me personally, I just thought it was pretty beautiful the way that I could be coming from Costa Rica but be originally from Dallas and be attending a Mass about harmony in Syracuse, New York,” she said. The “universality of the idea of peace and harmony and how we really are all connected was pretty symbolic and pretty literal in that invitation to the Mass, so I certainly knew I wanted to be here,” she said. Johnson attended the Mass with fellow members of the FrancisCorps community.

Bishop Cunningham’s opening words of thanks and recognition struck Johnson. “He started with thank you, with that idea of gratitude, and with really being intentional about recognizing who was here…. I will carry that attitude of gratitude with me and that idea of recognizing others — and when we recognize others, they are no longer others. We are all in that moment,” she said.

Watch the Mass in its entirety below, courtesy Syracuse Catholic Television.