Bishop-elect Lucia: ‘I am here to serve the people of the Diocese of Syracuse’ 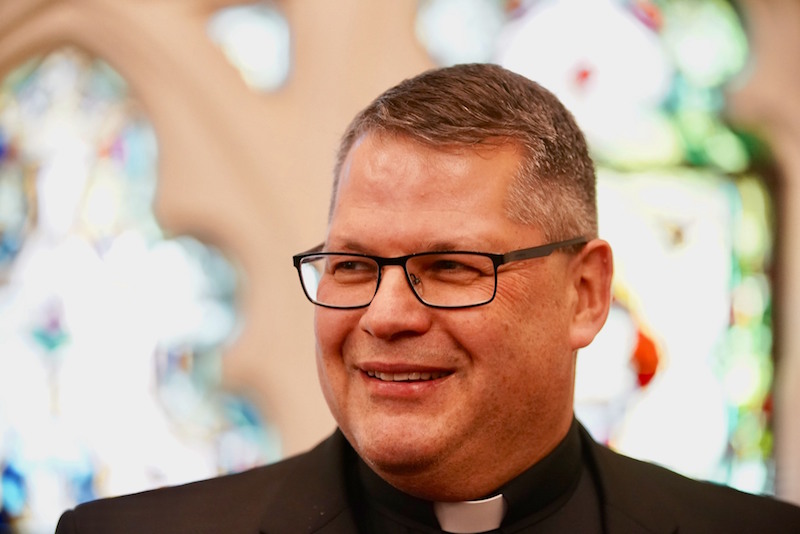 The future Bishop of Syracuse, Father Douglas J. Lucia, recalled at a morning press conference announcing his appointment the words inscribed on the chalice gifted to him at his ordination in 1989: “Ordained to God’s Service.”

“These words have been a beacon for the past 30 years of my priestly ministry and they set the stage for the next part of the journey with you. I am here to serve the people of the Diocese of Syracuse, Catholic and non-Catholic alike. I look forward to getting to know you and you getting to know me. I can tell you that one of my first priorities will be to visit folks in their parishes,” he said.

It was announced this morning that Pope Francis has named Father Douglas J. Lucia, 56, of the Diocese of Ogdensburg, as the Diocese of Syracuse’s 11th bishop. The bishop-elect was introduced to the people of the diocese at a press conference held at the Cathedral of the Immaculate Conception. 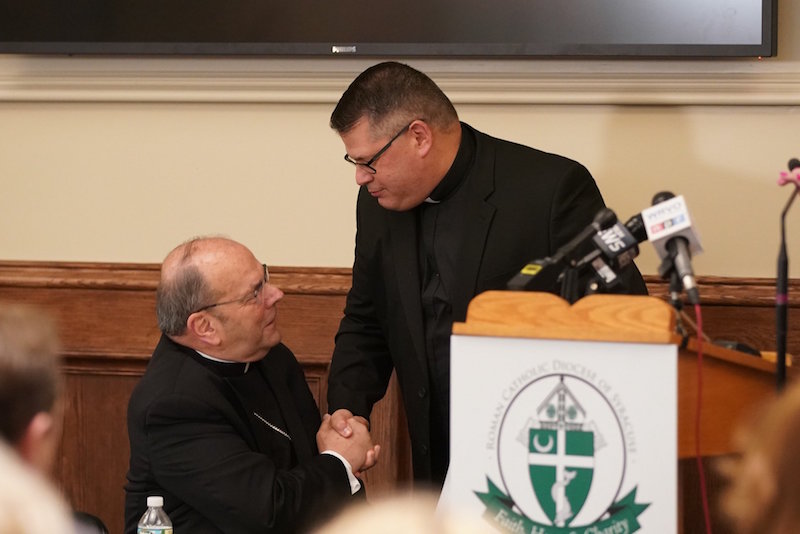 Bishop Robert J. Cunningham began the conference by reminiscing that it didn’t seem that long ago that he stood in the door of the cathedral and was welcomed as the new shepherd of Syracuse by then-Bishop James M. Moynihan. Bishop Cunningham was appointed Bishop of Syracuse on April 21, 2009, and was installed May 26 of that year. Bishop Cunningham turned 75 last June and, as required by canon law, submitted his letter of resignation to the Holy Father.

“But even before that, when I was named the Bishop of Ogdensburg [in 2004], there was a young priest in Ogdensburg who greeted me at the garage door of the bishop’s house and snuck me in at night the night before the announcement was made — and that was Father Lucia,” Bishop Cunningham said. “We were privileged to live and work together for five years there, living together for two years as Father Lucia served as my secretary and master of ceremonies in the Diocese of Ogdensburg.”

“We’re delighted to welcome Bishop Lucia. We look forward to his coming and living and dwelling among us, teaching us, leading us ever closer to Christ,” he said.

Bishop-elect Lucia said he was “still in shock over the occasion that gathers us together” and that “you would be correct in stating that this appointment as the eleventh Bishop of Syracuse comes as a total surprise to me. I’ve had no clue whatsoever that my life was going to change so dramatically.”

He thanked Bishop Cunningham for his welcome and support over the last few days “as I tried to figure out what I was supposed to do while maintaining strict confidentiality.”

“Little did I ever expect that, 15 years after welcoming Bishop Cunningham to Ogdensburg and assisting him with that transition in his life, that he would be doing the same for me here in Syracuse,” Bishop-elect Lucia said, noting that he would need Bishop Cunningham’s wise counsel as he cares for the Church and that he looked forward to having the bishop emeritus in the neighborhood.

He thanked the priests, religious, faithful, and Bishop of Ogdensburg, Terry LaValley, a longtime friend who “has spurred me on greater holiness since our earliest days in priesthood and continues to challenge me in my service of the People of God — along with getting enough exercise — through his own personal example.” Bishop-elect Lucia also thanked his parents, Leward and Betty, “for being for me and my siblings the first teachers in the faith by their own example.”

Bishop-elect Lucia will take as his motto “In the Name of Jesus,” words drawn from Acts 3:6 that reference “the greatest gift Peter could give someone along the way: to show the healing and merciful face of God. That is my simple prayer for my time of service in the Diocese of Syracuse,” he said. 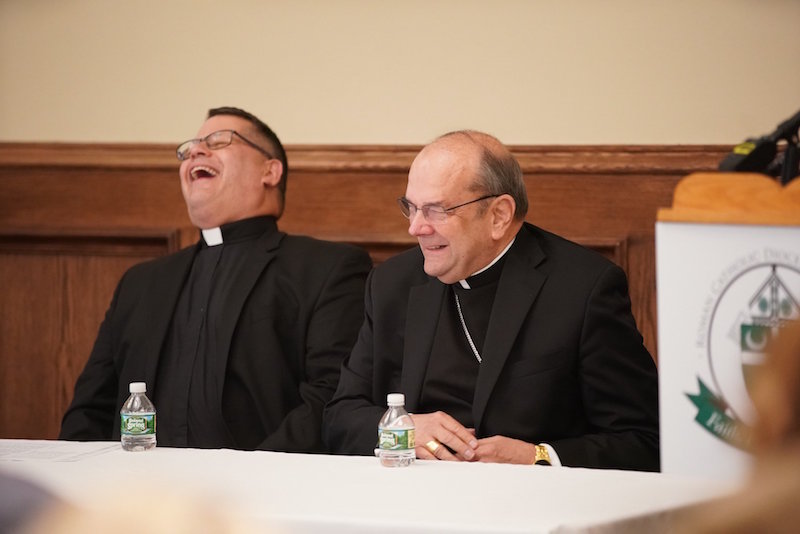 May 1989: Masters in divinity degree from Christ the King Seminary, East Aurora.

May 20, 1989: Ordained to the priesthood at St. Mary’s Cathedral, Ogdensburg, by Bishop Stanislaus J. Brzana.

1996: Associate secretary of the Matrimonial Tribunal.

September 2004: Appointed as chancellor and episcopal vicar for Diocesan Services; additional responsibilities as diocesan director of seminarians in 2005.

June 2006: Appointed pastor of churches in Morristown and Hammonds, with responsibility for mission of church in Rossie; also appointed diocesan director of Office of Worship.

2017: Appointed pastor of churches in Waddington and Madrid and judicial vicar of diocese; continued role of diocesan vocations director and director of seminarians.