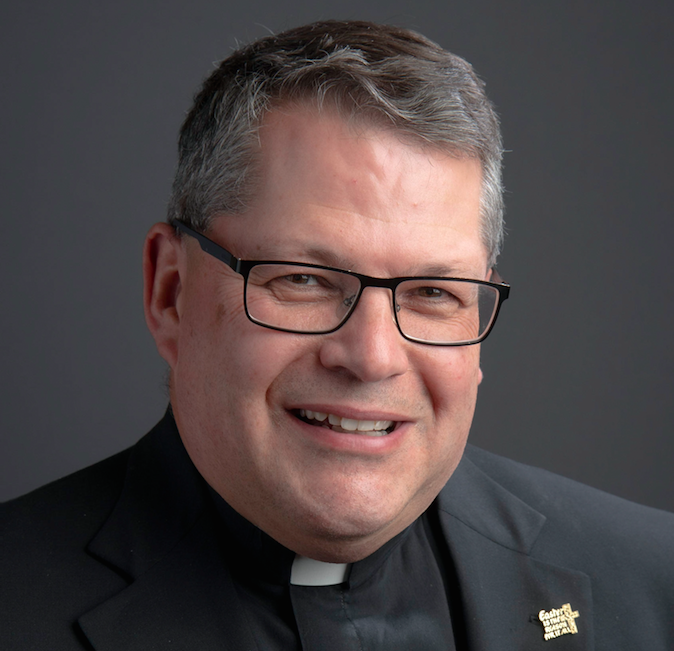 Father Douglas J. Lucia, 56, of the Diocese of Ogdensburg, has been named the 11th Bishop of Syracuse. (Photo provided)

Update: Bishop-elect Douglas J. Lucia will be ordained and installed as bishop at Syracuse’s Cathedral of the Immaculate Conception on Aug. 8.

The Vatican and the Diocese of Syracuse announced the appointment early Tuesday morning.

Bishop-elect Lucia will succeed Bishop Robert J. Cunningham, 75, who has served as the diocese’s bishop since May 26, 2009. The announcement comes almost one year after Bishop Cunningham submitted his letter of resignation to the Holy Father and just over a week after the celebration of his 50th anniversary of ordination to the priesthood.

Bishop-elect Lucia will be ordained and installed as bishop at Syracuse’s Cathedral of the Immaculate Conception on a date soon to be determined, the diocesan statement said. Bishop Cunningham will serve as apostolic administrator of the diocese until his successor is installed.

Bishop-elect Lucia currently serves as pastor of St. Mary’s Church in Waddington and St. John the Baptist Church in Madrid, as well as the judicial vicar, vocation director, and director of seminarians for the Diocese of Ogdensburg.

Bishop-elect Lucia will greet the diocese at a press conference at the Cathedral at 10 a.m., which will be streamed live on the diocese’s Facebook page. He and Bishop Cunningham will celebrate Mass together there at 12:10 p.m.

The diocese’s complete announcement is below. This story will be updated throughout the day.

Syracuse, NY –   Pope Francis has appointed a new bishop for the Roman Catholic Diocese of Syracuse.  Bishop-elect Douglas John Lucia, 56, of the Diocese of Ogdensburg will become the 11th bishop of Syracuse, succeeding Bishop Robert J. Cunningham who has served the diocese since May 26, 2009.  Bishop-elect Lucia will be ordained and installed at the Cathedral of the Immaculate Conception located in downtown Syracuse at a date soon to be determined.

Bishop Cunningham submitted his resignation to the Holy Father upon his 75th birthday on June 18, 2018, as is required by canon law.  He will continue to serve as the Apostolic Administrator until Bishop – elect Lucia’s ordination and installation.

Bishop-elect Lucia was born on March 17, 1963, the son of Leward and Betty (Pepin) Lucia in Plattsburgh, N.Y.  He and his twin brother and their sister and younger brother grew up in Altona, N.Y.  He received a Bachelor of Arts from Wadhams Hall Seminary College in Ogdensburg, N.Y., in May 1985 and a Masters in Divinity from Christ the King Seminary in East Aurora N.Y. in May 1989.  He was ordained to the Ministerial Priesthood at St. Mary’s Cathedral in Ogdensburg on May 20, 1989, by Most Reverend Stanislaus J. Brzana, DD, STD, Bishop of Ogdensburg.

From 1997 to 1999, the bishop-elect was assigned to study canon law at the Pontifical University at St. Thomas Aquinas (Angelicum) in Rome.  During the summer of 1998, he served as a parochial vicar of Holy Family Church in Watertown and worked part time for the Diocesan Tribunal Office.

Upon the completion of his studies in June 1999, Bishop-elect Lucia was named adjutant judicial vicar and vice chancellor.  He also served as administrator at St. Raphael’s in Heuvelton and as a part – time chaplain at the Gouverneur Correctional Facility.

In 2000, he was appointed secretary to the bishop and in 2003 was named diocesan director of vocations.

From September 2003 to March 2004, the bishop-elect served as administrator of St. Mary’s Church in Canton.  In September 2004, Bishop Robert J. Cunningham, then Bishop of Ogdensburg appointed him as chancellor and episcopal vicar for Diocesan Services.  In 2005, he was given additional responsibilities as diocesan director of seminarians.

In June 2006, while retaining his diocesan responsibilities, Bishop–elect Lucia was appointed pastor of St. John the Evangelist Church in Morristown and St. Peter’s Church in Hammond with its mission of St. Patrick’s Church in Rossie.  He was also appointed diocesan director of the Office of Worship.

In August 2008, the bishop-elect was appointed pastor of the Roman Catholic Church of St. Mary’s in Canton where he served until June 2017.  During this time period, he served as the episcopal vicar for worship as well as the adjutant judicial vicar.

In 2017, Bishop-elect Lucia was appointed pastor of St. Mary’s Church in Waddington and St. John the Baptist Church in Madrid and the judicial vicar of the diocese.  He continued in his role of diocesan vocation director and director of seminarians.

On June 4, 2019, Pope Francis appointed him to be the 11th bishop of the Diocese of Syracuse. As bishop of Syracuse, Bishop- elect Lucia will be the shepherd of over 220,000 Catholics who reside in seven counties of the diocese covering 5,479 square miles.