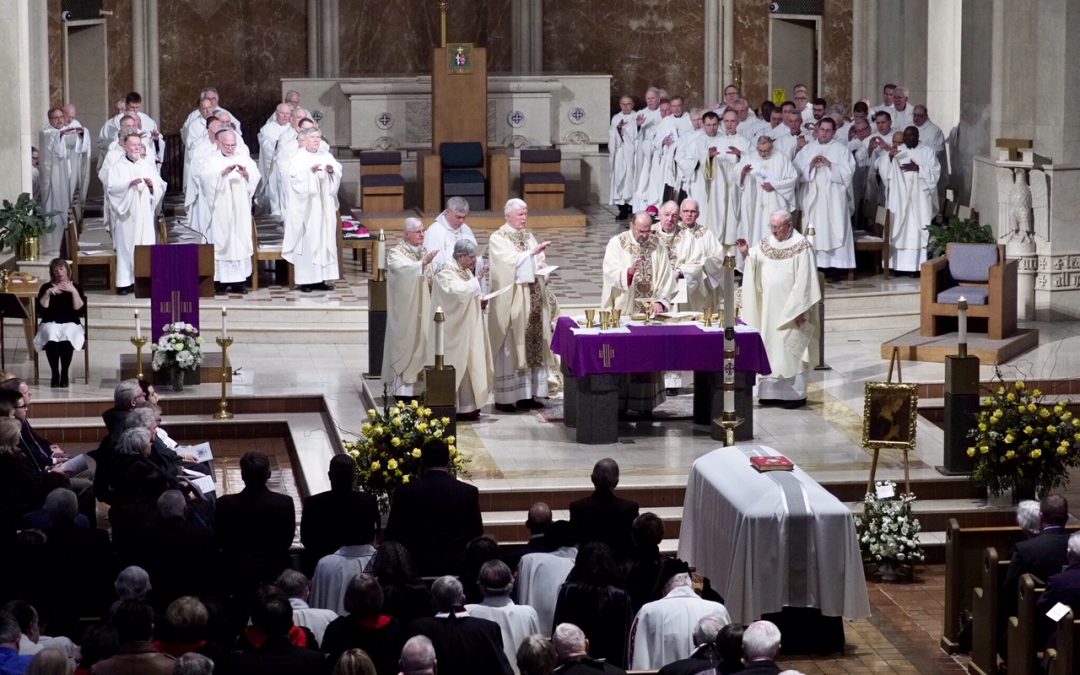 Most Rev. James M. Moynihan was laid to rest surrounded by family, friends, clergy, religious, and faithful during a moving liturgy celebrated at the Cathedral of the Immaculate Conception March 10.

The Mass was celebrated by Bishop Moynihan’s successor as ordinary, Bishop Robert J. Cunningham. Cardinal Timothy Dolan, Archbishop of New York, had been scheduled to celebrate, but a canceled flight prevented him from attending.

Bishop Moynihan’s family sat close to their beloved brother and cousin: Caroline Anne Moynihan, bishop’s sister, and cousins James E. Moynihan, John Moynihan, and Thomas Moynihan were seated in the front pew, as was bishop’s caregiver Julie Merola. Behind them were many of the nurses and others who cared for Bishop Moynihan over the years.

Bishop Moynihan planned his funeral liturgy before his death, selecting songs and readings that were particularly meaningful to him, Chancellor and Director of Communications Danielle Cummings said.

The first reading, Isaiah 25:6-9, was proclaimed by Cummings. She was hired as communications director by Bishop Moynihan soon after his tenure began; he later appointed her assistant chancellor. Bishop Moynihan also presided at her wedding.

The second reading, Ephesians 4:1-7, 11-13, was proclaimed by Parker, diocesan Director of Stewardship and Development. He, too, was hired by Bishop Moynihan, and the bishop also presided at his wedding to Debra Sochan, who, at the time, served as diocesan chief financial officer.

The Gospel, Matthew 11:25-30, was proclaimed by Deacon Matthew Lyons, who will be ordained a priest of the diocese this June.

Father Clifford Auth, who served as chancellor under Bishop Moynihan, offered the homily.

“I’m grateful today to be able to share these words about Bishop Moynihan, someone who I consider a mentor and also a friend,” he said.

Father Auth spoke of the opposing bookend of that faith — the doubt that can plague us all at times.

Father Auth drew on the words of his predecessor as chancellor, the late Msgr. Michael Minehan: “There’s not a day that goes by that the bishop does not want to pray with his priests and continuously prays for his priests.”

At his installation as bishop, Father Auth said, Bishop Moynihan was asked questions about building up the Church as the Body of Christ, sustaining the people of God, and showing kindness to those in need. “To every single one of those questions, Bishop Moynihan said yes. But I believe he said yes to remind us that the exercise of bishop is less title and more function.”

Father Auth shared a quote from St. Marianne Cope, the Franciscan sister who grew up and ministered in the diocese in the 1800s: “May God give us the strength to teach and to lead all we encounter that there is nothing more important in our world than the love of God.”

“Bishop Moynihan exercised his leadership in the pursuit of that goal,” Father Auth concluded. “Our question: In what way will we exercise our leadership?”

At the conclusion of the Mass, Bishop Moynihan was committed to the Cathedral crypt. He rests there with six of the diocese’s late clerics: Bishop Patrick Ludden; Bishop John Grimes; Bishop Daniel Curley; Bishop Joseph O’Keefe; Msgr. James McPeak, who served as rector of the Cathedral for 43 years; and Msgr. Joseph Champlin, who also served as Cathedral rector.