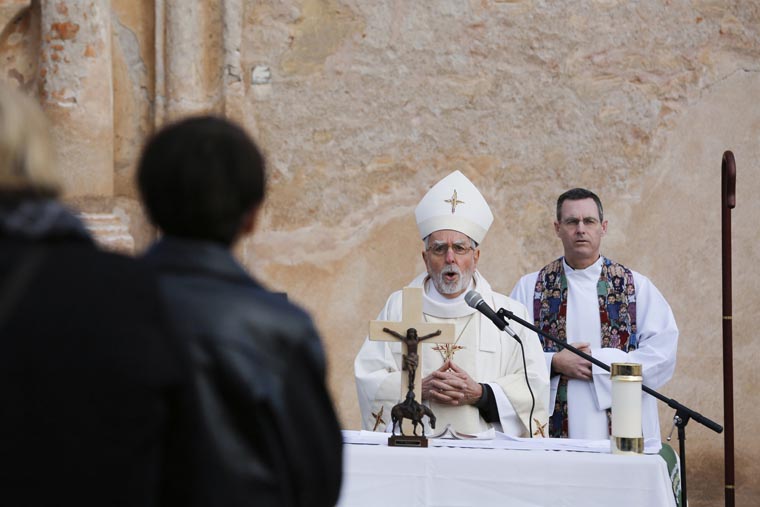 WASHINGTON (CNS) — Pope Francis has accepted the resignation of Bishop Gerald F. Kicanas of Tucson, Arizona, and named as his successor Bishop Edward J. Weisenburger, who has headed the Diocese of Salina, Kansas, since 2012.

Bishop Kicanas, former vice president and former secretary of the U.S. Conference of Catholic Bishops, has headed the Diocese of Tucson since 2003. He is 76. Canon law requires bishops to turn in their resignation when they reach age 75.

The changes were announced in Washington Oct. 3 by Msgr. Walter Erbi, charge d’affaires at the Vatican’s nunciature in Washington.

He is a board member of the Catholic Legal Immigration Network, known as CLINIC. He also is the former chairman of the board of directors of Catholic Relief Services, the U.S. bishops’ overseas relief and development agency.

Bishop Weisenburger will be installed as the seventh bishop of Tucson Nov. 29. Bishop Kicanas will now serve as administrator of the diocese until his successor’s installation.

“We are blessed that the Holy Father Pope Francis has appointed as our seventh bishop in the Diocese of Tucson a caring and loving pastor and shepherd for our community,” Bishop Kicanas said in a statement.

“He will walk with us, listen to us and stand up for us. His many gifts will provide the pastoral leadership we need,” he added. “He will be a collaborative worker with diocesan personnel, interfaith leaders and all those with responsibility in this vast diocese of 43,000 square miles.”

“I am humbled to follow in the footsteps of a shepherd who has served graciously and generously for many years,” Bishop Weisenburger, 56, said in a statement. “Bishop Kicanas has served in many national capacities for the Catholic Church and is highly esteemed. Knowing that he will continue to reside in our diocese is a great comfort for me and a blessing for our people.”

Edward Joseph Weisenburger was born in Alton, Illinois, Dec. 23, 1960. He spent two years of his childhood in Hays, Kansas, but grew up primarily in Lawton, Oklahoma, graduating from high school in 1979.

He attended Conception Seminary College in Conception, Missouri, where he graduated with honors in 1983. He then attended the American College Seminary at the Catholic University of Louvain in Belgium, where he earned a bachelor’s degree in theology and master’s degrees in religious studies and in moral and religious sciences. He also studied Spanish in Spain while attending seminary in Belgium.

Ordained a priest of the Archdiocese of Oklahoma City Dec. 19, 1987, he was parochial vicar at St. Mary Church in Ponca City, Oklahoma, until he was sent to the University of St. Paul in Ottawa, Ontario, where he earned a licentiate in canon law.

When he returned to the archdiocese in 1992, then-Father Weisenburger was appointed vice chancellor and adjutant judicial vicar. He also provided weekend parish and prison ministries from 1992 to 1995 and served as an on-site chaplain for rescue workers in the weeks following the April 19, 1995, bombing of the Murrah Federal Building in Oklahoma City.

In addition to chancery duties, he worked in parish and prison ministries from 1992 to 1995, often celebrating the sacraments in Spanish.

In 1996, he was appointed vicar general of the archdiocese. He remained with the archdiocesan tribunal for almost 20 years and served in various capacities including promoter of justice for the sainthood cause of canonization of Father Stanley Francis Rother, who was beatified Sept. 23.

A Chicago native, Gerald Frederick Kicanas was born Aug. 18, 1941. He was ordained a priest for the Archdiocese of Chicago April 27, 1967, and for 25 years, he served in various capacities in the archdiocese’s seminary system. In 1984, he was appointed rector of Mundelein Seminary and held seminary postings that included rector, principal and dean of formation at the former Quigley Seminary South.

He was named coadjutor bishop of Tucson Oct. 30, 2001, and his episcopal ordination was Jan. 15, 2002. Tucson Bishop Manuel D. Moreno retired March 7, 2003. As coadjutor, Bishop Kicanas immediately succeeded him as head of the diocese.

The Tucson Diocese covers over 42,700 square miles of the southern part of Arizona. It has a total population of just over 1.9 million people, of whom 390,418, or 20 percent, are Catholic.