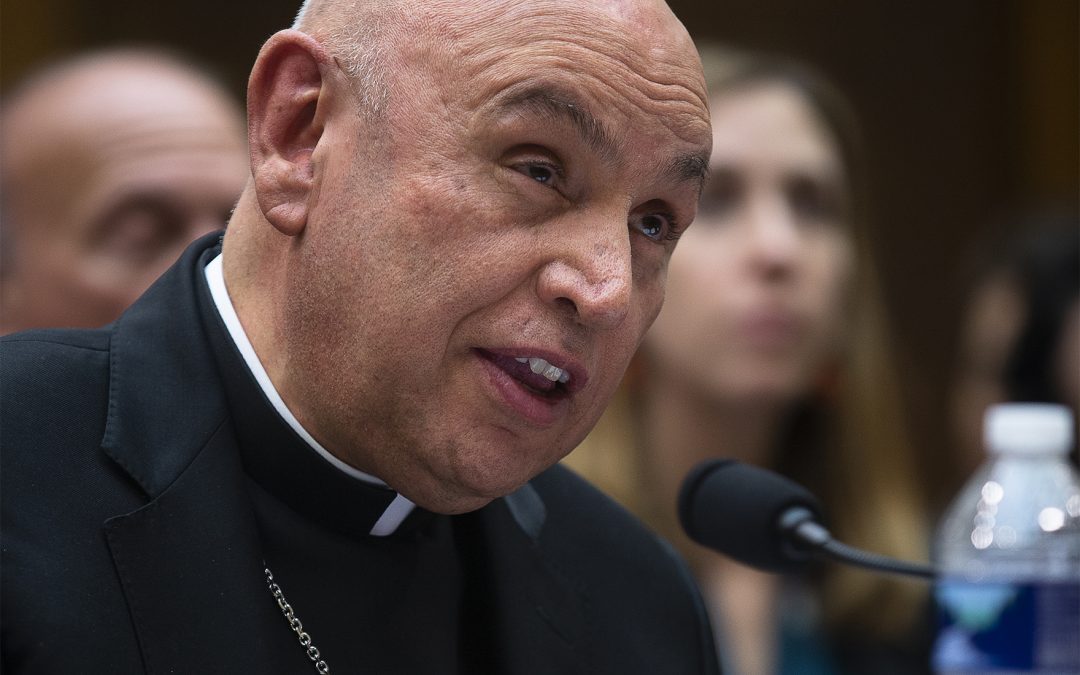 WASHINGTON (CNS) — During a Feb. 27 congressional hearing about the status of the nation’s refugee program, Auxiliary Bishop Mario E. Dorsonville of Washington quoted someone who is not frequently mentioned on Capitol Hill: Pope Francis.

“Today I am here to echo the Holy Father’s message: to recognize that we must at all times, but particularly at this moment of great global turmoil, recognize the most vulnerable and welcome them to the extent we are able,” he said.

The bishop, chairman of the migration committee of the U.S. Conference of Catholic Bishops, pointed out to the members of Congress and others seated in the hearing room that he was there to offer his perspective as a naturalized immigrant to the United States from Colombia.

He was one on a panel of four people addressing the House Judiciary Subcommittee on Immigration and Citizenship, looking at the status of the U.S. Refugee Program, a week before 40th anniversary of the bipartisan Refugee Act of 1980, signed into law by President Ronald Reagan.

The bishop was joined by Barbara Strack, advisory member for Church World Service Immigration and Refugee Program and former chief of the refugee affairs division for U.S. Citizenship and Immigration Services; Biar Atem, a Nevada delegate to the Refugee Congress and a member of its board of directors, who came to the U.S. as a refugee from Sudan; and Lora Ries, senior research fellow in homeland security at the Heritage Foundation.

Bishop Dorsonville did not talk about the specifics of U.S. efforts to resettle refugees, now hampered by declining numbers permitted to enter the United States, but he emphasized more than once the country must do more.

“Despite cuts to resettlement programs and numbers of refugees allowed, we need to welcome refugees now more than ever,” he said. He also said the worst response would be indifference, the direct opposite of the concern Pope Francis has asked the world to show refugees.

“We have a strong responsibility to be leaders in the international community,” he added, stressing that if the country closes its doors, it will be isolating itself in the global world at the very time it should be showing compassion and solidarity to refugees.

The bishop pointed out that Pope Francis, in his first public trip as pope, visited the southern Mediterranean island of Lampedusa where he prayed for the hundreds of African migrants who drowned while trying to reach the shores of Europe.

He asked during this visit a question the bishop said applies to everyone: “Where is your brother, your sister?”

Bishop Dorsonville said Catholic Charities agencies around the country have heeded the pope’s call to welcome refugees for more than 50 years, mainly because it recognizes the sacredness of human life.

When he was asked how church leaders felt about Texas Gov. Greg Abbott’s announcement in January that the state would no longer resettle refugees, the bishop said this decision was disappointing for the state’s Catholic bishops.

Rep. Sylvia Garcia, D-Texas, chair of the subcommittee holding the hearing, similarly mentioned the Texas governor’s action, which she called “misguided.” This decision is currently on hold since a preliminary injunction now blocks the Trump administration from enforcing the executive order that would allow state and local government officials to reject refugee resettlement.

In her opening remarks, Garcia said: “The world is experiencing the worst refugee crisis in history with an estimated 25.9 million refugees worldwide, and we cannot abandon our long-standing tradition of leadership in welcoming them.”

She said refugee resettlement has been part of a bipartisan effort for decades, “yet, all of this changed when this administration politicized refugees, guided by lies, and slashed the number of refugees admitted to the United States each year.”

The Trump administration has capped the number of refugees to 18,000 for this year, down from a limit of 30,000 in 2019 and significantly less than the 110,000 President Barack Obama said should be allowed into the United States in 2016.

In the bishop’s submitted remarks, he noted that the country is not even on track to reach the goal of resettling 18,000 refugees this year.

His remarks stressed that refugee resettlement is reserved for the most vulnerable who face an urgent need to leave their home countries.

“These most vulnerable populations need our help immediately, and we, along with the other voluntary agencies, stand ready to work with you and with the administration to ensure that together we reach this year’s goal of 18,000 refugee admissions,” his remarks said.