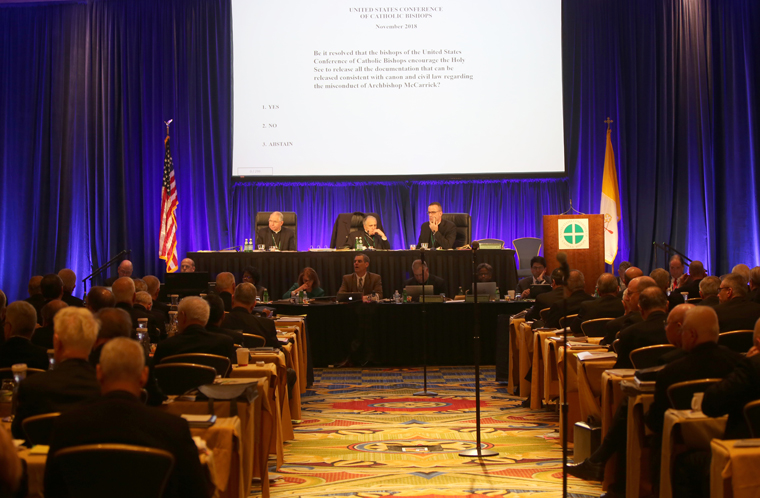 By Mark Pattison | Catholic News Service
BALTIMORE (CNS) — The U.S. bishops arriving in Baltimore expected to make a statement with a series of steps meant to address a new clerical sexual abuse scandal in the church, among them a collection of standards of episcopal accountability, the creation of a lay-dominated commission to investigate allegations of bishop misconduct and a third-party reporting system to field such complaints.

They left Baltimore with no action on those steps. Even a hastily written, seemingly innocuous statement asking the Vatican to release “soon” its documentation on an investigation into retired Archbishop Theodore E. McCarrick went down to a lopsided defeat Nov. 14.

So what is left for the bishops to do? Perhaps not much as a group right now, but individually they still can do much within their own dioceses, according to bishops at a Nov. 14 news conference following the public portion of the bishops’ annual fall meeting.

“All of those touched-upon things we were looking at as a conference, individual bishops can do that. We can do that already,” said Bishop W. Sean McKnight of Jefferson City, Missouri.

“The bishops, individually, already have a certain amount of power and authority,” Bishop McKnight added. “I have recently told the religious communities serving in my diocese that they have to release the names of those credibly accused to remain serving in my diocese.”

“There was consensus in the anger that was expressed by the bishops. I think we’ve all heard the anger of our laypeople back home,” said Coadjutor Bishop Oscar Cantu of San Jose, California. “We listened for many hours over the past couple of days to those concerns … and to specific recommendations, though we could not act on them.”

The Vatican asked the bishops to delay voting on the abuse-related agenda items until after a February meeting for the heads of all bishops’ conferences worldwide and so the proposed measures could be checked for their conformity to canon law.

“This conference has to be a leader globally,” Bishop Cantu added. “In many ways in what we’ve done with the Dallas charter, the good things that have been accomplished for the past 16 years (since the charter was adopted) have to be replicated across the world,” such as sharing them with other bishops’ conferences “and for Pope Francis himself to hear.”

“Here in this meeting, there were many, many things that we could do that we don’t have to wait,” said Bishop Shelton J. Fabre of Houma-Thibodaux, Louisiana. “The tragedy of this is the victims and their own pain and their own hurt,” he said, noting they listened to abuse victims during the meeting who want the bishops “to prevent this from happening again.”

Bishop McKnight, who used to work at the U.S. Conference of Catholic Bishops as a priest, said he spotted a growing consensus among bishops for greater lay involvement in dealing with abuse-related matters. As an ex-staffer, he added, “I noticed certain members of the (bishops’) conference that can generally be found on the right, and they were strongly advocating for the involvement of the laity.”

“This crisis might be drawing us together,” at least in regard to “the utilization of the lay charisms it the church,” Bishop McKnight said. I think there was recognition from the left and the right … to incorporate the lay genius.”

At the USCCB, then-Father McKnight was executive director of the Secretariat for Clergy, Consecrated Life and Vocations from 2010 to 2015.

There are “positive things they can do without having consensus or a document,” Bishop Christopher J. Coyne of Burlington, Vermont, said of his fellow bishops. “I am committed to transparency and accountability. My personnel files in Boston and Indianapolis are open to anyone who wants to see them where I was a priest. I absolutely support the lay board I put into place.”