Bishops take another try at addressing abuse, accountability among their own 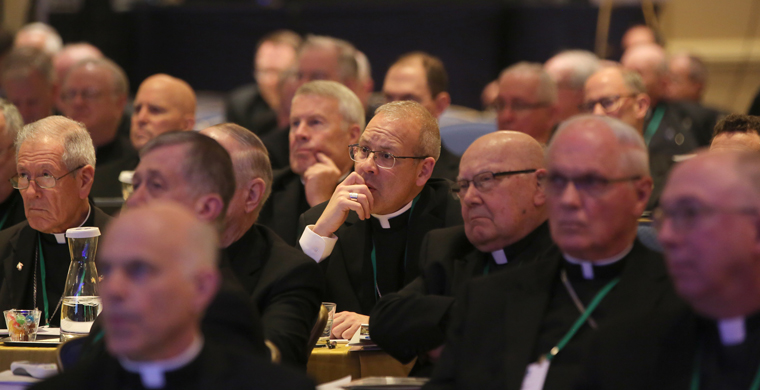 WASHINGTON (CNS) — When the bishops gather in Baltimore June 11-14, their meeting will be anything but pro forma.

Instead, they will have some major decisions to make that may determine how quickly they are able to rebuild trust with their fellow Catholics following a series of recent exposes, allegations and scandals regarding bishops themselves.

“This is going to be a working meeting,” said one observer, implying the likelihood of vigorous discussion and debate as the bishops seek to approve a series of proposals dealing with the investigation of abuse or cover-up of abuse by bishops.

The attention of the bishops and the dozens of news media who will be following the proceedings will be focused on four action items.

The most important of these, and perhaps the one most likely to be debated, concerns the directives for the implementation of the recent “motu proprio,” or church law, issued by Pope Francis and governing complaints directed against clergy or church leaders regarding the sexual abuse of minors or vulnerable persons.

The “motu proprio,” known by its Latin title “Vos estis lux mundi” (“You are the light of the world”), grew out of the extraordinary gathering of the presidents of the world’s bishops’ conferences Feb. 21-24 in Rome. The “motu proprio” modified existing church law to bolster laws regarding clergy sexual abuse, including protection for whistleblowers and condemnation of any sort of cover-ups of such abuse.

While many of the directives of the “motu proprio” regarding clergy have already been implemented in the United States with its 2002 “Charter for the Protection of Children and Young People,” the action items before the bishops concern allegations of abuse or negligence on the part of bishops. Bishops were not explicitly included in the charter because authority over the bishops and their discipline rests with the pope himself.

The new laws promulgated by Pope Francis, however, calls for a “public, stable and easily accessible” reporting system for such allegations, the use of “proven experts from among the laity” to investigate such allegations, and the oversight of the metropolitan (another term for archbishop) to direct such investigations in his province.

At the November meeting of the U.S. bishops, reforms regarding the investigation of bishops were discussed but not voted on at the request of the Vatican. One subject of debate and discussion at that meeting concerned some sort of “special commission” that would be an independent means to receive and investigate allegations made against bishops.

The “motu proprio” issued by Pope Francis last month makes clear, however, that the primary responsibility for any such investigation lies with the metropolitan archbishop for the province, who in turn reports his findings to the pope. In the case of a metropolitan being accused, the responsibility falls to the senior bishop in that province.

An example of this most recently was Baltimore Archbishop William E. Lori’s investigation of allegations of sexual and financial improprieties made against Bishop Michael J. Bransfield, former bishop of the Diocese of Wheeling-Charleston, West Virginia. Archbishop Lori was the responsible metropolitan who in turn brought in a team of five experts to conduct a five-month-long investigation, ultimately affirming that the allegations were credible and passing along the results of the investigation to the Vatican.

This investigation was begun prior to the issuance of the “motu proprio,” but it was in some ways a textbook case of how such an investigation is to be handled.

However, a subsequent report by The Washington Post, which received copies of the final report, an earlier draft of the report and other documentation by an unnamed source, also points out the limitations of the metropolitan option. According to the documents received by the Post, the final report edited out the names of prelates who had received financial gifts from Bishop Bransfield, including Archbishop Lori.

After the Post story, a spokesman for Archbishop Lori said his thought was that identifying the individuals who received the gifts was a “distraction.”

In hindsight, his spokesman explained, the archbishop can see how not sharing this information could be seen as protecting those whose judgment could have been compromised by such gifts. Archbishop Lori subsequently forwarded the names to the Holy See.

While the “motu proprio” directs a metropolitan who has a conflict of interest to recuse himself, the incident has raised long-standing concerns about “bishops investigating bishops.”

The challenge for the U.S. bishops next week will be to find a way to convince themselves and their people that there are enough safeguards in the document to ensure that justice will be done in a relatively open and transparent manner.

In the case of Archbishop Lori, who already instituted many of the reforms to be discussed in his archdiocese last January, he established a third-party reporting system in which allegations against any bishop in his archdiocese are first reviewed by two retired judges. They in turn determine whether the allegations appear to warrant further investigation and whether civil as well as church authorities should be notified.

How to implement safeguards on a national level that will apply to all 32 metropolitans, that will conform to the intentions of the pope’s “motu proprio” and that will provide some sort of assurance that the bishops are serious about policing their own is the challenge they will face in Baltimore.

In addition to the directive for implementation of the “motu proprio”, the bishops also will vote on a document entitled “Acknowledging Our Episcopal Commitments.” The document acknowledges the outrage of Catholics over reported failings by bishops. The bishops promise to hold themselves accountable to the commitments of the Charter, which affirms a zero-tolerance policy, and that any codes of conduct in their respective dioceses regarding clergy apply to themselves as well.

It also promises an “independent, third-party entity” through which reports of sexual misconduct with a child or an adult by any cleric, including a bishop, can be reported.
A third, and relatively uncontroversial, proposal to be voted on is a “protocol regarding available non-penal restrictions on bishops.” This outlines what canonical options are available to bishops when a now-retired bishop resigned or is removed “due to sexual misconduct with adults or grave negligence of office, or where subsequent to his resignation he was found to have so acted or failed to act.”

At the November meeting when this protocol was first discussed, at least two bishops — Archbishop Bernard A. Hebda of St. Paul and Minneapolis and Bishop Steven R. Biegler of Cheyenne, Wyoming — spoke of challenges they faced regarding the status of their predecessors. The protocol outlines a series of options allowing the current bishop to restrict the activities of the retired bishop. The current bishop will also make any reports required to law enforcement.

The most striking element of the protocol is that the president of the bishops’ conference would now have the authority to ban a bishop who was retired due to misconduct or negligence from attending any plenary assembly or serve on any body of the U.S. Conference of Catholic Bishops.

The bishops also will discuss a fourth proposal, which will define what an independent third-party reporting system will look like, how it will function in terms of notifying the metropolitan, and who will maintain it.