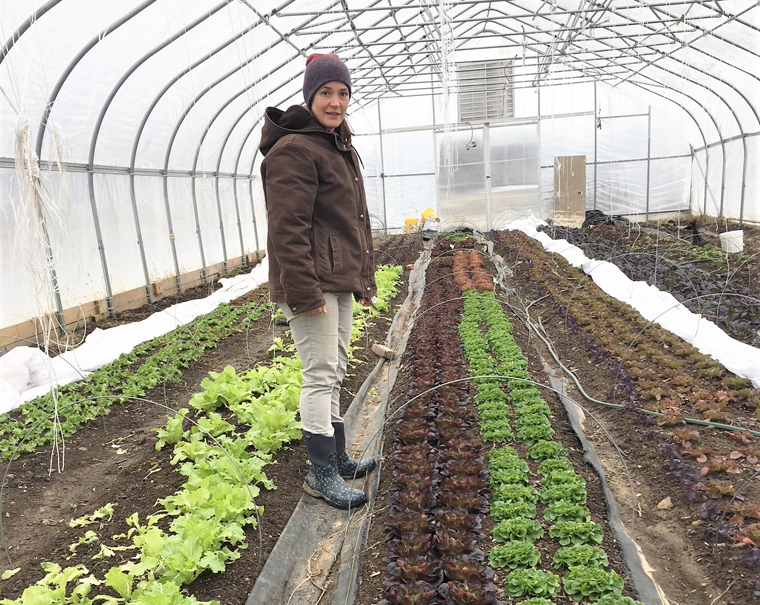 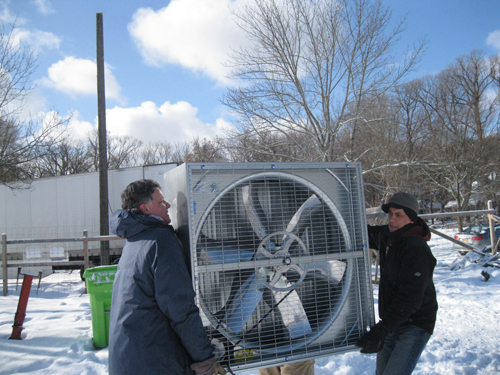 Volunteer Tony Ortega, left, and Kevin Frank, executive director of the Brady Faith Center, carry a fan that will be installed in the new greenhouse — Tunnel 3 — at Brady Farm.

Everybody hustled amid the clanging of metal posts that arrived at Brady Farm. Meanwhile, the garlic, planted in the fall, enjoyed a slow day, waiting under the snow.

On the 22-degree morning of Feb. 20 at the plot in Syracuse, a tractor-trailer pulled up and about a dozen farm workers and volunteers unloaded steel posts and the plastic covering for the 96-by-30-foot “high tunnel” (greenhouse) that will go up soon.

“It’s been a while since I’ve had a lot of company here,” said Farm Manager Alice Gallagher, “so it’s really nice to just … be around folks again.”

“I’m looking forward to actually building a tunnel,” said one of the farm workers, Danielle Thomas.

“It’s going to be our largest high tunnel on our farm,” said Kevin Frank, executive director of the Brady Faith Center, which is less than two miles from its namesake farm that sits between Valley Drive and Onondaga Creek.

The Brady Faith Center says it strives to “meet the spiritual, educational, and social needs of individuals and families in the Southwest Community of Syracuse.”

Since 2016, the farm, which has about 2.5 acres under cultivation this year, has provided the area with “nutritious foods, employment, and education that nourishes the body, mind and spirit.”

“Plants are energy,” Frank said. “Plants are a sign of hope.” He is amazed by the “12 inches of soil that keeps us all alive.”

He added: “We’re planning for the spring and hiring, so a lot is going on here at the Brady Farm year-round.”

Right now there are three major markets for the food, Frank said: allotted hours at the farm itself, at 150 Ford Ave.; the Community Supported Agriculture (CSA) subscription program; and Saturdays at the CNY Regional Market.

A new location for Brady Farm sales this year will be the Café Sankofa Cooperative at 2323 S. Salina St. in Syracuse. “We’re also looking at a West Side location,” Frank said.

The big new greenhouse will be called Tunnel 3. A thermostat will set the temperature, and once it is reached, automatic shutters will open up.

Tunnel 1 is for seedlings. But Tunnel 2 produced a box of produce, mostly greens and carrots, every other week recently for the 23 subscribers of Brady Farm’s winter CSA, which ended Feb. 13; the summer CSA had 50 subscribers.

This winter the Asian greens did well in Tunnel 2, which also grows kale that will be ready in the spring.

Also, the farm’s first crop of shiitake mushrooms did very well last year; they were grown mainly outside, with just a couple of weeks in Tunnel 2 to extend their season. The new tunnel will help expand that operation.

Brady Farm Coordinator Jessi Lyons said adding Tunnel 3 will allow the farm to do a better job this year with popular crops such as tomatoes and peppers.

“Just hanging out” under the snow in the field now, along with the garlic, she said, are winter carrots, onions, and some lettuces — crops that will be “really beautiful for spring harvest.”

Spinach and lettuces will be ready in April; asparagus and some onions in May; more onions in June; and the garlic in July, along with the tomatoes and peppers because they grow in the greenhouse. And this year, the farm will grow okra in a tunnel instead of outside so that the crop is ready earlier.

A big change this year will involve selling produce from other local farms, Lyons said, such as broccoli, winter squash, potatoes, and sweet corn. Other staples may include bananas and lemons.

Also new will be wellness ambassadors — perhaps a nutrition expert, a fitness coach, or a chef — who will offer educational workshops on topics such as managing diabetes with food; they might offer taste testing of vegetables too.

At last fall’s annual Brady Faith Center Awards Breakfast, the farm raised enough money to put up another tunnel as an enhanced wash-and-pack space, Lyons said, and another goal is to install sewage pipes and a bathroom with a flushing toilet.

This year, Farm Manager Gallagher said, the farm will focus mostly on crops such as tomatoes, cherry tomatoes, peppers, and some eggplant in Tunnel 3, with perhaps a row or two of cucumbers. Cucumbers and melons are possibilities for Tunnel 2, she said.

“I’m excited to have just these beautiful peppers,” she said, “that we trellis up that are taller than we are by the end of the season.”

It took only about an hour, amid occasional light snowfall, for the crew to unload the parts to Tunnel 3 from the tractor-trailer that drove up from Nolt’s Greenhouse Supplies in Ephrata, Pa.

“Farmers are a unique group of people” with an attitude of “let’s get it done,” Frank explained.

“I work in the cold all the time,” she said.

Get your Brady Farm food box

This year we’re changing our CSA (Community Supported Agriculture program) a bit. In addition to our standard 21-week program, we will also offer a “Regional Box” with products from other local farms. That way we can include things we don’t grow well, or at all, like strawberries and broccoli.

And the new “Grocer’s Box” will be a year-round CSA that will include some products that aren’t grown locally but that are in high demand, such as lemons and bananas. We’re also planning on selling produce at Café Sankofa, 2323 S. Salina St., Syracuse, on Thursday afternoons this spring.

The Brady Box and Regional Box customers will have the option to “build their own box” online each week to ensure they get only products they want.