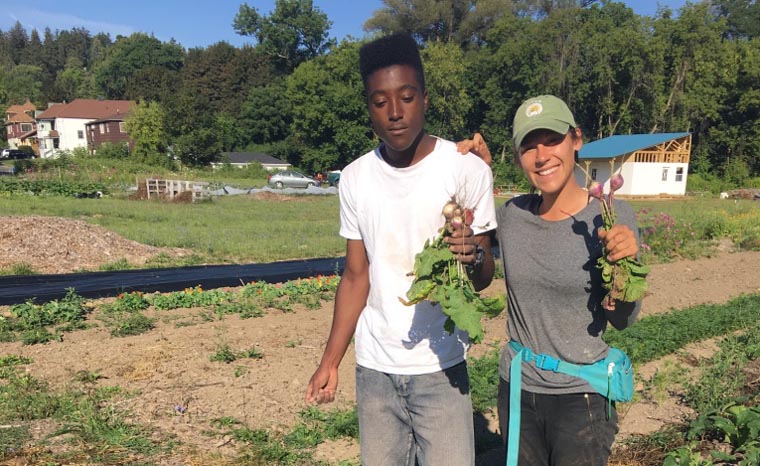 The flying grasshoppers scattered as the farmers dived in to answer the call: cucumber crisis!

Last Thursday, Brady Faith Center Urban Farm Coordinator Jessi Lyons reported from the Central New York Regional Market, where she was selling the harvested produce. A cucumber fan had bought a half-bushel, and now Lyons was out of the classic salad vegetable.he flying grasshoppers scattered as the farmers dived in to answer the call: cucumber crisis!

Five miles away, on the cultivated land next to Onondaga Creek on Syracuse’s South Side, Farm Manager Alice Gallagher and Farm Assistant Chris Hector responded with a C&T roundup — cucumbers and turnips. It was sunny with 55 percent humidity, but CNY must be served.

The Brady Farm (Bradyfarm.org) encompasses 5.8 acres, with about two acres under cultivation. Radiating joy about her job, Gallagher noted that the plantings, covering more than one hundred yards, wind around in a “J” shape.

A sense of urgency and a four-pronged ethic hang over that big “J”: Simultaneously grow, weed, harvest, and sell in order to fulfill this mission: “Create an economically sustainable and resilient source of affordable, locally grown food for the community, skilled and employable youth and adults, hands-on community education, and a respite for the community.”

“Respite” would not define Gallagher’s role. “It’s exciting and overwhelming and a lot of learning that just takes so much time until you can use all that knowledge,” she said, adding that she has to be patient.

It’s her first year on the farm, which already looks different than it did in its inaugural year of 2016. A big packing shed is going up, with a roof that matches the Brady Faith Center blue. The shed will offer dry storage of crops such as garlic, onions, and winter squash.

“This week,” Gallagher said, “we harvested chard and collards, flowering dill, yellow summer squash, zucchini, bell peppers, maybe four varieties of hot peppers, cucumbers, some eggplant; the eggplant are starting to come in. The watermelon is starting to sweeten up.”

“As a farmer,” she said, “I want to be growing really healthful food,” adding that she tries to grow food that is culturally appropriate for different groups of people.

The chard looks tasty with its glowing lime-colored leaves. “They’re kind of waxy-looking, some of the leaves,” Gallagher said. Adding even more color to the farm are zinnias, marigolds, and sunflowers.

She added: “We have cantaloupe this year, which is really exciting, ’cause we’ve never grown that. And so hopefully that’ll be ready in the next week to week and a half. … And people love our lettuce mix. So we found a product that we can do well that people are excited about. We just don’t have it here right now ’cause we didn’t realize how popular it was.”

Gallagher appreciates the help she gets. “We have a lot of wonderful people that come volunteer,” she said, “and some are very regular. But any help we get is appreciated.”

Also assisting is CNY Works, whose goal is “providing skilled workers for every business and employment for every job seeker.” Three people from CNY Works worked at the farm this summer, including Gallagher’s assistant in the field last Thursday, Hector.

“What I liked about it is spending time outdoors,” he said, “getting outside for some fresh air.”

Asked about his favorite aspect of the job, he said, “They let us taste the food. … I recommend eating the carrots.”

Farm Coordinator Lyons was out in the fresh air as well, putting in her shift at the CNY Regional Market, where the “beets, carrots, herbs, and greens … go pretty quickly.” Fresh dill is also popular.

The Brady Faith Center Urban Farm also sells crops at a pop-up tent 9 a.m. to 1 p.m. Saturdays at the entrance to the farm on Ford Avenue, a side street off Valley Drive. The farm tries to keep prices as low as possible, Lyons said.

In addition to the pop-up tent and the CNY Regional Market sales, she said, the farm has about 41 subscribers who receive a box of produce every week. It’s called community-supported agriculture (CSA). The subscribers prepay and select six items that the farm then harvests for them. About 17 of those subscribers get a discount because of an Excellus BlueCross BlueShield subsidy for low-income families, Lyons said.

As the farm expands, it moves past procedural hurdles and prepares for future seasons. The recent completion of a re-subdivision process means that the farm can now apply for a fence permit from the city.

By mid-September, Lyons hopes to have a fence to keep out the marauding deer. The insects, such as midges, beetles, and stinkbugs, are annoying too, requiring some crops to be covered.

Although the farm has not gone through the process to be certified as organic, it uses organic methods, Lyons said, avoiding chemical-based pesticides.

Brady Farm is starting to get some regular customers, she said — a following of people who know the farm’s products are different and know the mission of the Brady Faith Center: helping people find hope within themselves.

Lyons said Brady Farm specialties that some other farms don’t carry include okra, turnips, and Japanese eggplant. The crops will all be on display 10 a.m.-3 p.m. Saturday, Sept. 9, when the farm welcomes the public as part of ON Farm Fest, a day featuring tours of several area farms. Just-picked produce will be available for sale at Brady Farm.

“The Onondaga County Agriculture Council is thrilled to support and highlight the Brady Farm during the second annual ON Farm Fest,” said Onondaga County Legislator and Agriculture Council Co-Chair David Knapp.  “ON Farm Fest encourages families to visit, tour, and have fun at some of our local farms.  I would encourage attendees this year to make the Brady Farm one of their tour stops to see farming in an urban setting and to learn about all the great things that are happening at the farm.”

Going up in late August or early September at Brady Farm will be a “high tunnel,” a white plastic greenhouse that keeps things warmer, helps keep pests out, and extends the growing season. That means crops can be harvested in February.

Next year, Gallagher said, the farm will put more land into production; she would like to plant rutabaga, but that might be in years to come.

Another grower at the Regional Market told Lyons that in the 1940s and ’50s, circuses were held at the farm site. Now, the only acrobats are the birds and the flying grasshoppers.

Which is fine as long as they don’t eat much.