Brady Market ‘counting on you’ 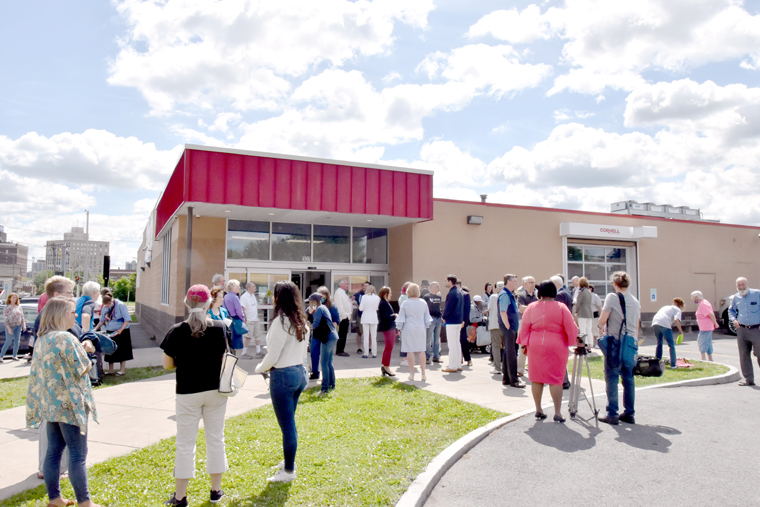 Nonprofit grocery store opens on Near Westside of Syracuse

Everybody joined in as if it were a commercial with an eager cast.

Like a TV director priming the performers, the MC boomed:

“We cater!” the crowd yelled.

“Can you all say that Brady Market caters?” 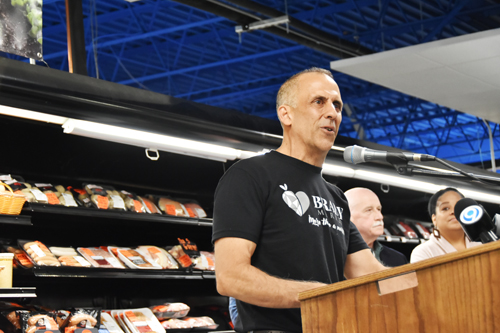 Again, the people complied under the deep blue ceiling at the June 23 grand opening of the easily navigable, freshly renovated grocery store that formerly was Nojaim Bros. Supermarket on the Near Westside of Syracuse. All items are handy without walking a mile. Shoppers finish an efficient visit with not just dinner but also a sense their dollars have served a mission.

“A big day for the people,” said Father John Schopfer, pastoral director at the nearby Brady Faith Center. The faith center formed Brady Social Enterprises, a separate 501 (c)(3), as an umbrella organization for its first entrepreneurship, Brady Market. Another Brady program, Brady Farm, will supply some of the produce for the market.

Described formerly as a food desert, the Near Westside now boasts the basics plus Cooked Food, Prepared Foods, Grab & Go, and Vegetarian; Smoked Turkey Wings, Frozen Chicken Sliders, and many other meats; and desserts such as Sock It To Me and Mississippi Mud. Brady Market does not sell alcohol, lottery tickets, or tobacco products.

“Every dollar spent in our market increases programming in our community,” Brady Market’s flyer says. “Enjoy our Delicious Hot Lunches and Dinners at Affordable Prices. SHOP WITH PURPOSE! WE CATER FOR A CAUSE!”

Brady Market employs community residents who need a first, second, or third chance in life. “Would it be OK with you if you couldn’t be more than the worst thing you’ve ever done?” MC Kevin Frank, executive director of the Brady Faith Center, asked the crowd arrayed behind the long, low meat cooler.

The audience said no.

• Hope: Paying jobs on day one in a job-training program that leads to a career.

• Health: Access to healthy and affordable food and nutrition.

• Healing: Social supports and services under one roof. 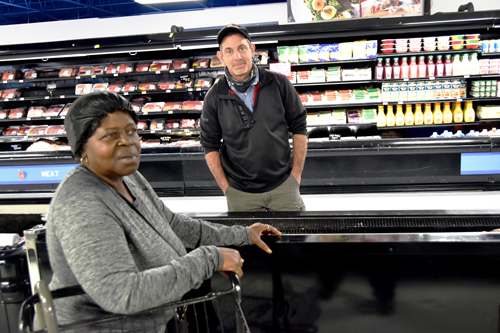 Shopper Beulah Haygood chats with Mike Faber, the Meat Department manager. They have known each other since the days of the former Nojaim Bros. Supermarket at the same site. “I feel like I’m … giving the customers a nice store to come to,” Faber says.

Frank said: “All of us need to have access to people who are there for you and with you supporting you through our hardest times. … And whenever and wherever there is no access …., we begin to lose hope. And we then transmit our pain more than we transform it.

“But what if — what if we as a community could dream big and outside the box? What if we could create access to hope through paying jobs on day one in a job-training program that could lead to a career?”

Brady Market will also help employees tackle child care, transportation, or other issues that may have gotten in the way of full-time employment, said Randy Wolken, chairman of the boards of the Brady Faith Center and Brady Social Enterprises.

Additionally, through a partnership with Dr. Michael Gilbert, a school psychologist, and his nonprofit It’s All About Childhood & Family, Inc., the market provides, under the same roof, its community health and wellness program: case management, mentoring, therapy, learning circles, tai chi, yoga, meditation, and Zumba.

Right now the market, funded by grants and individuals (see fact box), is fully staffed with 25 to 30 employees, with a number of prep cooks hired recently, but applications will be taken as positions open up. Wolken envisions the employees developing a greater skill set and then, 18 to 24 months later, taking better-paying jobs elsewhere in the community.

Food is the obvious product, “but our product most importantly is our people,” said Larkin Podsiedlik, Brady Market’s director of operations. “It’s our workforce-development trainees who are gaining workforce skills. … They are doing deep internal work to work on the barriers to employment that they’ve had in the past.”

She added that some employees just “know and love Brady and wanted to work on this project.” She herself had a great job at another nonprofit but she emailed Executive Director Frank and asked how she could help. “I’m a food person and a nonprofit person,” she explained.

What do customers want? 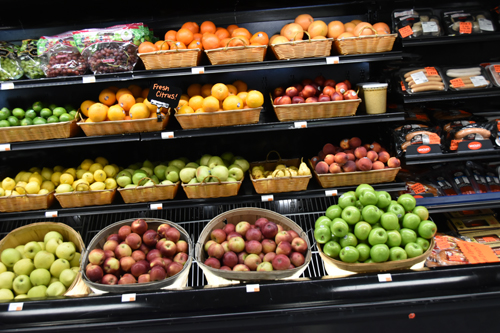 Plenty of fruits are available at Brady Market. “The community has embraced us — they’re buying product,” says Randy Wolken, chairman of the board of Brady Social Enterprises.

Brady Market held a soft opening in late May, “and then we’ve been getting a lot of feedback from the neighborhood,” Podsiedlik said. “Somebody comes in and says, Where are your cantaloupes? And we say, All right, we’ll order cantaloupes. And so we’ve been doing that a lot; we want to have more ingredients for our Hispanic population; that’s a request we’ve been getting a lot, so we’re working on figuring out how to source those at a good price. …

“We’re always looking for different products. Somebody came in and wanted asparagus, so we’re looking. … We have missteps and we have mistakes and we also have really big wins and we’re sort of taking all of those as a growth opportunity and rockin’ and rollin’.”

They’re also cookin’ and sellin’ with the help of employees such as grateful peer leader Danielle Allen, a single parent. “I guarantee you they never steer you wrong,” she told the assembled guests and shoppers in an impassioned speech that drew whooping and applause, “and you will leave a different person. Welcome to the Brady Market.”

MC and Executive Director Frank thanked the many people who helped the project, including his wife, Emily Nisco-Frank, who shared his vision. 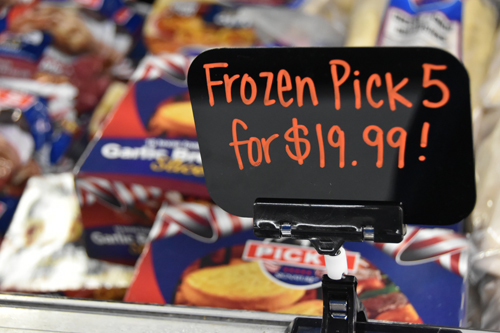 After the ceremony, the serious shopping recommenced. Meat Department Manager Mike Faber and shopper Beulah Haygood chatted with big ears nearby — pork ears in the cooler. Faber and Haygood, friends by this time, go back 22 years to the days when the store was owned by the Nojaims — that’s a lot of meat carved up into small chunks, the way Haygood likes it.

“You just gotta … give your customer a great deal, always give ’em what they want and they’ll be comin’ back for more,” Faber said. “And that’s what I want to bring back to the community here, because it really hasn’t had too much lately.”

“Have to have my bacon and my neck bones and my ribs,” said Haygood, who also knows her turkey tails and smoked pork hocks.

“You see some unique items that you don’t see in everyday stores,” Faber explained, “because the demand is there and they know how to use it better than anybody.”

“You can’t beat when you get your fresh meat cut the way YOU like,” Haygood said.

Over at the cashier was Ben Preston, who said he is from the Brady community and lives in North Syracuse. “I came here to shop,” he said, “because I support this project and I support everything that Brady Faith stands for. … I love the selection.”

Listen to the crew 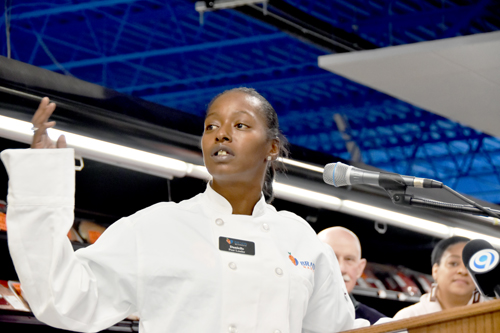 Peer leader Danielle Allen addresses the crowd at the grand opening. She says her employment can actually provide for her housing and help her provide for her children. Brady Market’s support system “has amazed me,” she adds.

Three days after the grand opening, peer leader Allen was on duty again. “I’ve been with the Brady Faith Center 39 years of my life, actually,” she said. “I was there from the time I was in my mother’s womb. … I noticed they fight for the rights of the community, making opportunities for younger kids to stay out of trouble, and also a pave-way for single mothers like me. … They gave me employment, they have a great support system …

“Yes, I love my job. They make a way for me and my kids to survive. … This place just makes me whole. … I’m wanted here, I’m not judged here, I’m loved here, and when it’s time they all come together as a team.”

Cashier Sonya Frank noted that with Nojaim’s being closed, people down the street had to wait for a ride or catch the bus to shop for food.

Another cashier, Tony King, said: “It’s not like a job, it’s more so like a family; we all protect each other, listen to each other. … It’s basically like I’m at Thanksgiving dinner with all my family all the time.” He added that the neighborhood has offered helpful advice regarding fresh produce: “Any critiques that we could take from them is a plus.”

Employee Darius Adjei said he works in security and also in the role of “whatever they need me to be.” They don’t need to teach him to smile, which he does all the time.

“A positive mind frame all the time,” he explained. “And you gotta enjoy helping people.” He helped a shopper look for chicken nuggets. “We don’t have ’em in right now, but … we already saw it on the [order] list,” he said.

“What a blessing the Brady Market has been for the good people living in the Near Westside —  excellent hot meals, reasonably priced and ready to go, a full line of grocery items plus a catering service open to all,” said Father James Mathews, pastor of St. Lucy Church in Syracuse. He said Executive Director Frank is a longtime friend who served for many years as the pastoral associate at St. Lucy’s.

“All of this translates into job training for a young and enthusiastic staff who are paid while in training,” Father Mathews continued.

“This is the most visionary project on the Near Westside that we have seen in years and we are most grateful.

“Make no mistake, this is a ministry; its purpose is to lift underserved people into the work force, giving them the necessary skills to support themselves now and their possible future families.

“Any and all proceeds are directed back into the program.

“This is a BIG WIN-WIN situation for all of us but it does require the support of the entire Syracuse Community.

“All at the Brady Market are counting on you.”

Father Schopfer said the Brady Market food is “fantastic. I got something [chicken] the other night, took it home. I had two meals out of everything.”

Offerings include Cooked Food, Grab & Go, Prepared Foods, and Vegetarian. Among the hot foods offered at the opening was a serving of pot roast with vegetables.