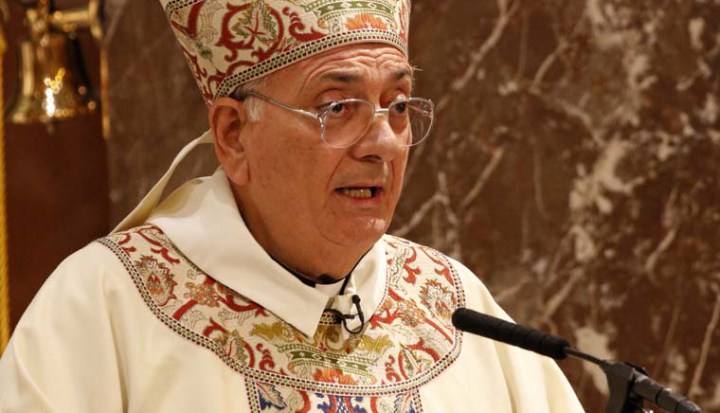 Bishop Nicholas DiMarzio of Brooklyn, N.Y., addresses the congregation while celebrating a Mass of hope and healing for victims of sex abuse at St. Anselm Church in the Bay Ridge section of Brooklyn in 2017. The Brooklyn Diocese has agreed to pay $27.5 million to settle four sex abuse cases. -CNS photo | Gregory A. Shemitz

WASHINGTON (CNS) — The Diocese of Brooklyn and an after-school program in New York have settled a case out of court for $27.5 million with four men who say they were sexually abused as boys, between ages 8 and 12, by a man whom the diocese identified as a “volunteer worker.”

The diocese argued in court — and said in a statement provided to Catholic News Service Sept. 19 — that the man, Angelo Serrano, abused the boys at his apartment, and not on church property, and that “he was not clergy or an employee of the diocese of parish.”

Serrano, described by various local news organizations in New York as a catechism teacher at St. Lucy-St. Patrick’s Catholic Church and interim director of religious education, is serving a 15-year prison sentence in New York after being convicted in 2011 of sex crimes involving a child under 13. He did not have a record while serving as a volunteer in the diocese in the late 1990s until 2009 when he was charged with the crimes that led to his imprisonment.

The diocese said “for three of the claimants, another defendant is contributing a significant portion of the settlement” but did not provide details.

The settlement puts to rest a civil suit by the four men against the diocese and an unnamed after-school program, which The New York Times identified as the Dorothy Bennett Mercy Center, and says it is slated to pay a third of the total settlement. A trial was set to take place next year. Lawyers for the unnamed plaintiffs said the abuse took place from 2003 until one of the boys told his mother about the abuse, leading to Serrano’s arrest in 2009.

News accounts say that while Serrano was not part of the staff, he had received a stipend.

The Wall Street Journal reported in Sept. 19 story that Brooklyn Supreme Court Judge Loren Baily-Schiffman, in a ruling in one of the cases, said: “The church’s attempt to minimize the fact that Serrano was caught in the church office kissing an 8- or 9-year-old unidentified boy as merely an ‘inappropriate embrace and a peck on the lips’ demonstrates a complete disregard of the training that (the pastor) was required to and did participate in.”

The diocese said in its statement that it “endeavored to reach this settlement in a way that compensates Mr. Serrano’s victims and respects their privacy.”

“We hope this is another step forward in the healing process for these claimants. The diocese remains committed to ensuring that its parishes, schools and youth programs remain safe and secure for the young people who are entrusted to our care,” the statement said.