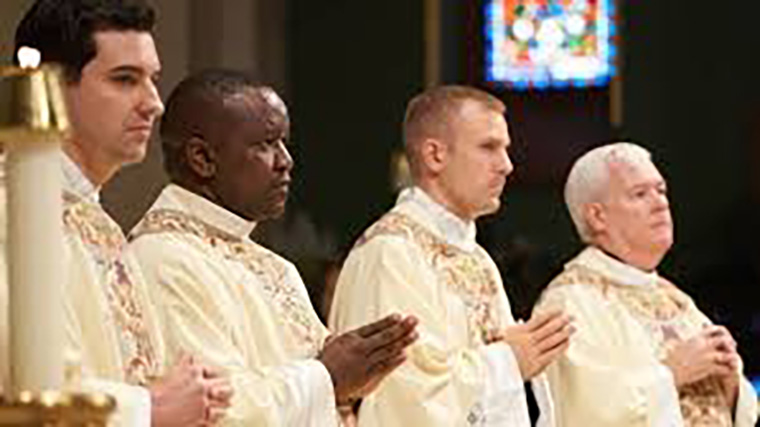 The first weekend in June is traditionally a time of great excitement and joy in the Diocese of Syracuse as it is ordination weekend for our new priests. In 2021 there were four men who were ordained. Unfortunately, there is no one this year receiving priestly Holy Orders.

Do not be afraid! Take a deep breath and smile wide. The diocese is still going to celebrate … and you can certainly help.

“Called by Name” is an effort that all parishes in the diocese have been urged to participate in this year. Parishioners throughout the diocese will be encouraged to consider who in their parishes might serve well as a priest, a deacon or religious. Cards will be distributed at Masses the weekend of June 5 and 6 — coincidentally, the feast of Pentecost — so parishioners can submit the names of prospective candidates for vocations. There are many good prospective priests, deacons, brothers and sisters who may simply be waiting to be asked.

“Coupled with that is a special prayer effort to take place throughout the diocese,” explains Father Jason Hage, the director of the diocesan Office of Vocations. “At 10 a.m. on that Saturday, traditionally the time we would ordain a priest, Bishop Lucia is going to lead a Holy Hour for more priestly vocations.” Father Hage also says that the CNY Marian Center is partnering with the vocations office. “They have reached out to every parish to consider doing an all-night vigil of adoration, starting Friday evening.” That effort will lead into the Saturday morning Holy Hour at the Cathedral of the Immaculate Conception which will be livestreamed on diocesan Catholic TV.

“It’s coupling prayer with this initiative, which I think will bring a lot of power to it,” Father Hage adds. “It will dovetail with the ‘Year of Vocations,’ trying to show the laity that they have a co-responsibility and co-ownership over future vocations for our Church. They are the ones who can make the ask and call forth vocations in the diocese.”

Those whose names have been submitted will be invited to Bishop Douglas J. Lucia’s annual vocations picnic. “The Tenth Hour,” as it is known, is held annually the first Wednesday of August at Christ the King Retreat House in Syracuse. This year’s event will take place Aug. 3. Attendees will learn about each of the possible vocations which the Church is inviting them to discern. They will have the opportunity to ask questions and be invited to further explore the discernment process.

Father Hage points out that this is “also to remind the young person being called that God calls us through His people.” With a knowing smile, Father adds that “it typically doesn’t happen through a mystical experience. … It really is the heart of God’s people that calls forth that vocation.”