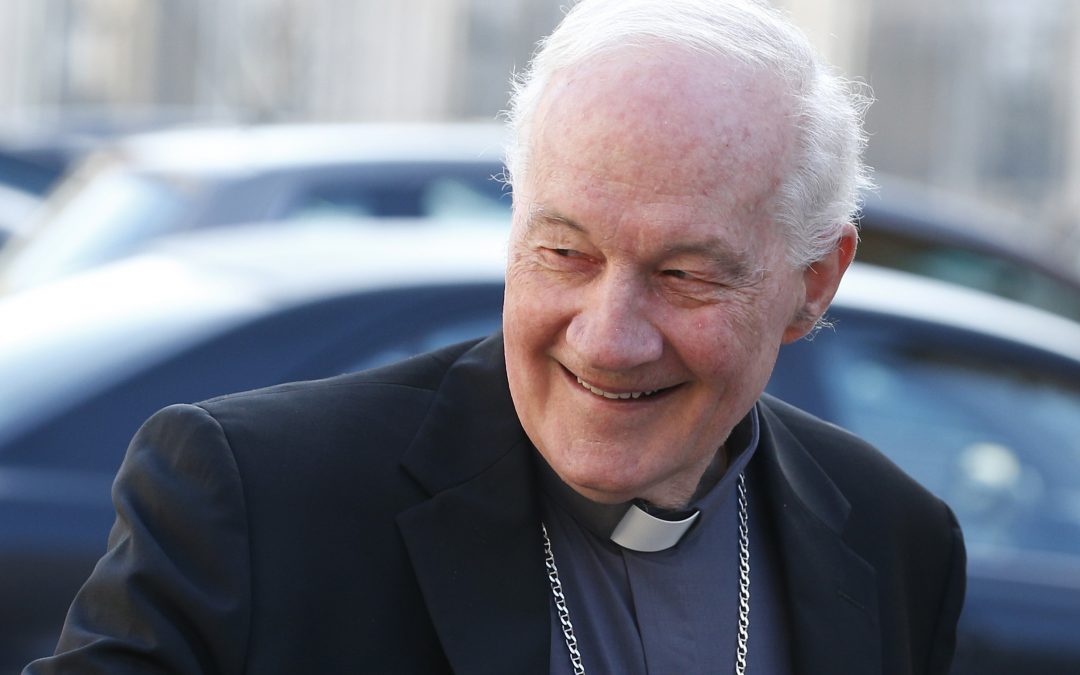 By Cindy Wooden | Catholic News Service
VATICAN CITY (CNS) — Former Cardinal Theodore E. McCarrick of Washington had been told by Vatican officials to withdraw from public life because of rumors about his sexual misconduct, said Cardinal Marc Ouellet, prefect of the Congregation for Bishops.

However, because they were only rumors and not proof, then-Pope Benedict XVI never imposed formal sanctions on the retired Washington prelate, which means Pope Francis never lifted them, Cardinal Ouellet wrote Oct. 7 in an open letter to Archbishop Carlo Maria Vigano, the former Vatican nuncio to the United States.

The archbishop had issued an open letter to Cardinal Ouellet in late September urging him to tell what he knew about now-Archbishop McCarrick. Archbishop Vigano’s letter followed a massive statement in mid-August calling on Pope Francis to resign because, he claimed, Pope Francis had known there were sanctions on Cardinal McCarrick and not only did he lift them, he allegedly made Cardinal McCarrick a trusted confidante and adviser on bishops’ appointments in the United States.

Addressing Archbishop Vigano as “dear brother,” Cardinal Ouellet said, “I understand how bitterness and disappointments have marked your path in the service of the Holy See, but you cannot conclude your priestly life this way, in an open and scandalous rebellion.”

Archbishop Vigano’s letters, he said, “inflict a very painful wound” on the church, “which you claim to serve better, aggravating divisions and the bewilderment of the people of God!”

“Come out of hiding,” Cardinal Ouellet told Archbishop Vigano, who left Rome as soon as his mid-August missive was published, claiming that it was for his own safety.

“Repent of your revolt,” the cardinal wrote before asking, “How can you celebrate the holy Eucharist and pronounce his (the pope’s) name in the canon of the Mass?”

Cardinal Ouellet’s letter, written with the approval of Pope Francis, was published the day after the Vatican said the pope had ordered a “thorough study of the entire documentation present in the archives of the dicasteries and offices of the Holy See regarding the former Cardinal McCarrick in order to ascertain all the relevant facts, to place them in their historical context and to evaluate them objectively.”

The statement added that “the Holy See is conscious that, from the examination of the facts and of the circumstances, it may emerge that choices were taken that would not be consonant with a contemporary approach to such issues.”

Archbishop Vigano had claimed he personally informed Pope Francis in June 2013 that in “2009 or 2010,” after Cardinal McCarrick had retired, Pope Benedict imposed sanctions on him because of allegations of sexual misconduct with and sexual harassment of seminarians. Archbishop Vigano later explained that Pope Benedict issued the sanctions “privately” perhaps “due to the fact that he (Archbishop McCarrick) was already retired, maybe due to the fact that he (Pope Benedict) was thinking he was ready to obey.”

In his open letter, Cardinal Ouellet told Archbishop Vigano, “You say you informed Pope Francis on June 23, 2013, of the McCarrick case in an audience he granted to you like many other papal representatives he met for the first time that day.”

“Imagine the enormous quantity of verbal and written information he received that day regarding many people and situations,” the cardinal wrote. “I strongly doubt that McCarrick interested him as much as you would like us to believe, given the fact that he was an 82-year-old archbishop emeritus who had been without a post for seven years.”

As for the written instructions the Congregation for Bishops prepared for Archbishop Vigano in 2011 when he was to begin his service as nuncio to the United States, “they say nothing at all about McCarrick.”
However, the cardinal added, “I told you verbally of the situation of the bishop emeritus who was to observe certain conditions and restrictions because of rumors about his behavior in the past.”

Cardinal McCarrick “was strongly exhorted not to travel and not to appear in public so as not to provoke further rumors,” Cardinal Ouellet said, but “it is false to present these measures taken in his regard as ‘sanctions’ decreed by Pope Benedict XVI and annulled by Pope Francis. After re-examining the archives, I certify that there are no such documents signed by either pope.”

And, unlike what Archbishop Vigano claimed, there are no documents from Cardinal Ouellet’s predecessor, Cardinal Giovanni Battista Re, saying that then-Cardinal McCarrick was ordered to live a life of withdrawal and silence under the threat of canonical penalties.

The reason such measures were not taken then and were only taken in June by Pope Francis, Cardinal Ouellet said, was because there was not “sufficient proof of his presumed guilt.”

“His case would have been the object of new disciplinary measures if the nunciature in Washington or any other source would have furnished us with recent and decisive information about his behavior,” the cardinal told the former nuncio.