Cathedral called symbol not just of faith, but ‘fact all humans have souls’ 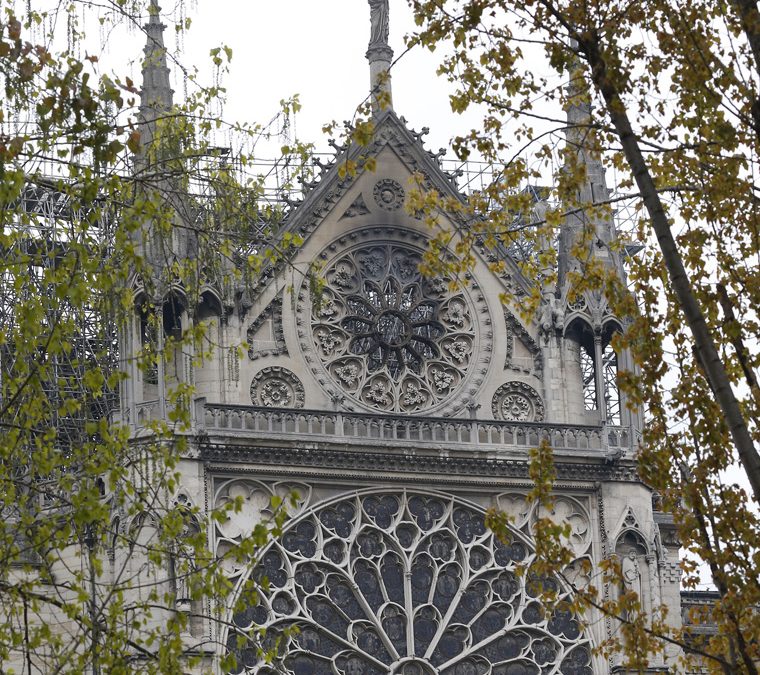 PHILADELPHIA (CNS) — Here is an April 16 column on the Notre Dame Cathedral fire from CatholicPhilly.com, the news website of the Archdiocese of Philadelphia. It was written by M. Jean Duchesne, a French Catholic guest columnist, and appears in place of Archbishop Charles J. Chaput’s regular column.

Duchesne co-founded the French edition of the Communio international theological journal and served as special assistant to the late Cardinal Jean-Marie Lustiger of Paris for more than 25 years.

The author of numerous books and articles on the faith, active in Jewish-Catholic dialogues and a consultant to Cardinal Lustiger’s successors, “he has been a friend to the church in

the United States for decades,” writes Archbishop Chaput. “He and his family live in Paris. I’m grateful for his willingness to offer his thoughts here on the Paris Holy Week fire.”

Seeing Notre Dame de Paris burning and threatening to collapse is a shock that leaves everyone voiceless — including President Emmanuel Macron, who canceled a speech dealing with the social unrest in France over the past few months.

The cathedral towering above the island on the Seine that was the cradle of the city is more than a venerable medieval building, more than an exceptionally beautiful architectural masterpiece. It has been for centuries the heart not only of Paris, but of the whole nation, the place where even atheistic presidents and ministers came to pray because they could not think of anything else to do when France was victorious (in 1918), defeated (in 1940) or liberated (in 1944).

It was desecrated during the French Revolution and turned into a temple of the goddess Reason, but Napoleon realized he had to give it back to the church and be crowned there if he was actually to become an emperor.

It also is a vibrant reminder of the faith of our ancestors, which shaped the monument and inspired every detail as a facet of God’s revelation and gifts as well as the overall design. It was meant and has survived as a representation of the celestial abode that everyone openly hopes for or secretly dreams of.

That something so ancient should defy time and remain so mysteriously meaningful is perceived as a miracle that no science can either deny or explain. This is why even nonbelievers feel affected. The Paris cathedral is the symbol not just of the Catholic faith, but of the fact that all humans have souls.

Rather strangely, non-Catholics lament more noisily than Catholics. They fear the damage is irreversible. Can it be repaired? How much will it cost? Can it be afforded? A fund has already been started to raise the money that is needed. But will this be enough to restore everything as it was? Is it possible to rebuild the roof’s oak framework that had resisted the elements since the 13th century? Will Notre Dame ever be the same again?

The faithful are less pessimistic, though they quite reasonably could be. The late Cardinal Jean-Marie Lustiger had centered the Paris Archdiocese’s life in and around the cathedral and refashioned the interior with an elegant modern altar in the middle. The loss of all this might seem to be the last blow after all the sex abuse scandals that have hit the church recently, and all the sociological studies highlighting the plummeting numbers of baptisms, ordinations and religious vocations, or revealing that the younger generations are simply unsure what Christians commemorate at Easter or what a parish is exactly.

On top of it all, this happens just at the beginning of Holy Week, the most sacred time of year for Christians: Where will the archbishop gather his priests for chrism Mass? And finally, why did God allow this?

Notre Dame on fire and perhaps unusable for months if not years is undoubtedly a trial. But faith does not allow to see this as a punishment or the confirmation of a decline and fall. There is some comfort to be found in the massive sense of affliction and solidarity of non-believers, since it proves that for them, however irreligious they are, the visible church is not a mere remnant of the past, but a vital part of the scenery, without which they themselves miss something. Yet, in the end, this support does not make that much of a difference.

What is decisive is the knowledge that Jesus Christ the groom will never abandon his bride the church — which does not mean that her faithfulness will never be tested. The Temple on Mount Zion was destroyed, rebuilt and destroyed again. St. Peter’s in Rome was plundered several times. The crusaders lost Jerusalem. What ultimately matters is not the signifier (the cathedral), but the signified (God’s glory) which remains forever fertile and will forever inspire those who long for it.